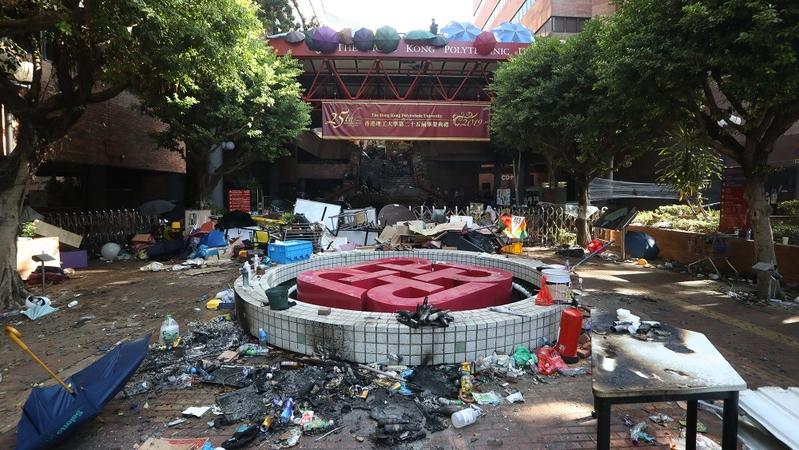 A square inside the Hong Kong Polytechnic University is seen littered with debris and assorted trash in the morning of Nov 18, 2019. (PHOTO / CHINA DAILY)

HONG KONG - Hong Kong police on Tuesday called on people who have still kept barricaded themselves in the Hong Kong Polytechnic University (PolyU) to leave the campus peacefully as soon as possible.

A safety team has been formed with other government departments and independent mediators including secondary school principals, social workers, clinical psychologists, ambulance officers, among others, police said in a statement.

In its statement, police noted that a working group set up by PolyU has entered the campus on Tuesday morning to persuade the remaining people to leave the campus as soon as possible

"The team is on standby in the vicinity of PolyU and will provide assistance if necessary," police said.

ALSO READ: Police appeal to rioters holed up in campus to leave

Police noted in the statement that a working group set up by PolyU entered the campus on Tuesday morning to persuade the remaining people to leave the campus as soon as possible.

"Police maintain close communication with the school and re-emphasize the two major principles of 'peaceful method' and 'flexible approach' to solve the situation," reads the statement.

For those in need of medical aid, police will prioritize their medical needs and not arrest them on the spot, police said in the statement, adding that they will enforce the law on those leaving the campus without medical needs.

PolyU has been occupied by radicals for more than one week, with a handful of them still staying inside the campus. Police announced on Monday that around 1,100 people have left the campus in a peaceful and orderly manner, including 300 underage people.