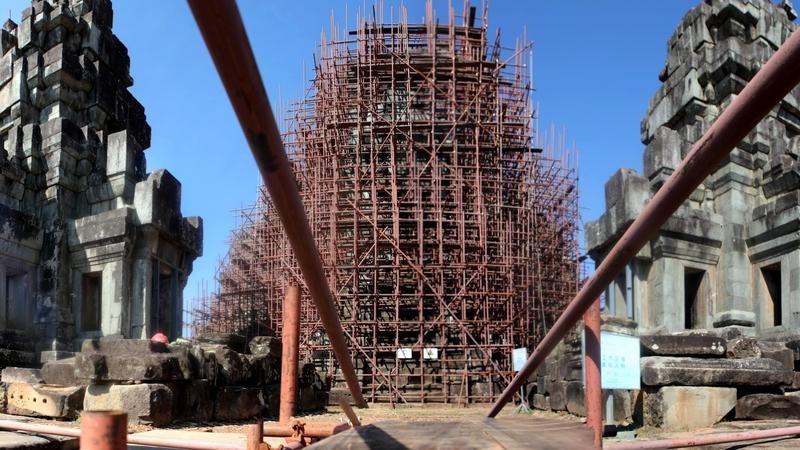 The Ta Keo Temple at the Angkor complex is being renovated by Chinese workers. (YUAN MENGXI / CHINA DAILY)

SIEM REAP — As the sun sets over the ancient city of Angkor in the deep jungle in northwestern Cambodia, a massive temple-mountain named Ta Keo glows golden in the rays.

Abandoned around 900 years ago soon after its ornamentation started, the magnificent structure has been revived in the hands of Chinese and Cambodian archaeological experts.

The ongoing project is the second phase of the Chinese government's aid for preserving, conserving and restoring Angkor temples, after the Chausay Tevada temple project ended in 2008.

Chinese experts have been working with local colleagues for over two decades to revive the invaluable treasures of Cambodia.

China-Cambodia cooperation in preservation and development of Angkor is a symbol of the longtime friendship and close cultural connection between the two countries. It also reflects the upgraded China-Association of Southeast Asian Nations (ASEAN) cooperation framework's emphasis on promoting people-to-people exchanges.

The Angkor complex consists of 200 stone monuments spreading over an area of 400 square km in northwestern Cambodia. It was inscribed on the World Heritage List of the United Nations Educational, Scientific and Cultural Organization (UNESCO) in 1992.

However, due to heavy rains, looting and lack of protection for centuries, most temples of Angkor, built between the 7th and the 13th centuries, were seriously damaged.

In order to better protect and conserve these gems of human civilization, China joined the International Coordinating Committee for the Safeguarding and Development of the Historic Site of Angkor (ICC-Angkor), an international campaign launched by Cambodia and UNESCO in 1993.

From Chausay Tevada to Ta Keo, the Chinese team has earned trust from the Cambodian people and established a good reputation for their professional experties.

Jin Zhaoyu, a cultural relic protection engineer from the Chinese Academy of Cultural Heritage (CACH), first arrived at Angkor in 2013 at the age of 35.

"I had read quite a lot of documents and seen many pictures of Ta Keo in China, but I was still stunned by its grandeur at the first sight," Jin said. He has devoted himself to saving the ancient temples.

Climbing up the stairs of the pyramid-shaped Ta Keo, Jin told Xinhua that it was very unique among all the temples in Angkor. "It was abandoned before the completion of the building, leaving many facades plain and pediments uncarved, which gives this temple-mountain a mixed character of magnificence and simplicity."

"Its unfinished status shows the construction procedures of temples in Angkor, like 'slices of time'," said Jin. "This gives Ta Keo irreplaceable value in the study of Angkor's architecture."

Such uniqueness, however, presented greater challenges to the Chinese team.

Located in the central zone of the Angkor Archaeological Park, the half-finished Ta Keo is a pyramid of five levels with five upper towers rising more than 50 meters high.

It was built by King Jayavarman V and Suryavarman I from the late 10th century to the early 11th century. The kings dedicated this temple to Hinduism, according to a document from the Cambodian Ministry of Tourism.

Compared with Chausay Tevada, Ta Keo covers a larger area and had more risks including unsteady stone structures, a poor drainage system and fallen key parts that are hard to be restored, said Jin.

"Because the construction is not completed, many fallen parts are not carved, leaving little information of its relations with other parts."

Jin showed the archives of those fallen parts, each with its ID file including picture and dimensions, in the office of the China-Cambodia Government Team for Safeguarding Angkor in Cambodia's Authority for the Protection and Management of Angkor and the Region of Siem Reap.

"Every stone is unique. If one stone is in the wrong position, the gap will grow wider as you restore the structure layer by layer and an accurate restoration will be impossible," said Jin.

"Simply speaking, our priorities are 'searching' and 'matching.' Finding the fallen parts and putting them back to the perfectly correct positions."

To better understand the temple's structure and precisely restore it, the Chinese team applied the most advanced technologies, including 3D laser scanning and mapping, structural research and drone recording, to build a complete digital model of Ta Keo.

Jin demonstrated the 3D model system, with which the team restored the temple hundreds of times.

"I can measure the dimensions of every stone and every gap in computer, and search the right stone that can fit in the gap," Jin said.

This is much easier said than done.

Dozens of Chinese experts from various fields including mapping, geology, archaeology, architecture and biology worked together with Cambodian colleagues to overcome a string of obstacles. It took them eight years to restore Ta Keo.

The conservation of Angkor marks the first time for China to officially participate in a large international heritage program, and to some extent it reflects the cultural cooperation under the Belt and Road Initiative in ASEAN countries, said Xu Yan, deputy director of the CACH.

"We integrated the internationally recognized conservation concepts into Chinese restoration principles and developed our Chinese mode for the conservation of Angkor," Xu said. "Our work was highly praised by Cambodia, UNESCO and the ICC-Angkor."

China and ASEAN have mapped out a blueprint, the China-ASEAN Strategic Partnership Vision 2030, to further advance their strategic partnership and forge wider mutually beneficial cooperation so as to build a closer China-ASEAN community with a shared future.

While encouraging people-to-people exchanges and cooperation for a better future, the two sides said they will promote youth exchanges in language learning, culture, art and heritage.

The protection of cultural heritage is of great importance for the sustainable development of mankind, and can serve as an important platform to promote people-to-people exchanges, said Hu Bing, deputy director of China's National Cultural Heritage Administration.

"I highly value and thank the Chinese government for supporting Cambodia in preserving our national heritage," Sackona said, adding that China's assistance has not only protected ancient temples, but also helped train Cambodian archaeologists on renovation and preservation tasks.

"When we worked here, both sides -- Chinese and Cambodian teams -- worked together smoothly, got on well with each other like brothers," said Nuth Poeng, leader of the Cambodian technician team in the Ta Keo project, sitting on a stone stair of the Ta Keo temple.

"We have learned a lot of skills from them. The Ta Keo project is finished but I really want them to stay here with us and help us restore more temples in Angkor."

Before long, the renovation of the Royal Palace of Angkor Thom will commence with financial aid from China.

As the third phase of China's aid to Cambodia in the protection and restoration of Angkor, the Royal Palace project is expected to last for 11 years.

"We're confident in the abilities of the Chinese experts, and through these projects, we hope that Cambodian experts will be capable enough of renovating temples by themselves in the future," said Minister Sackona.