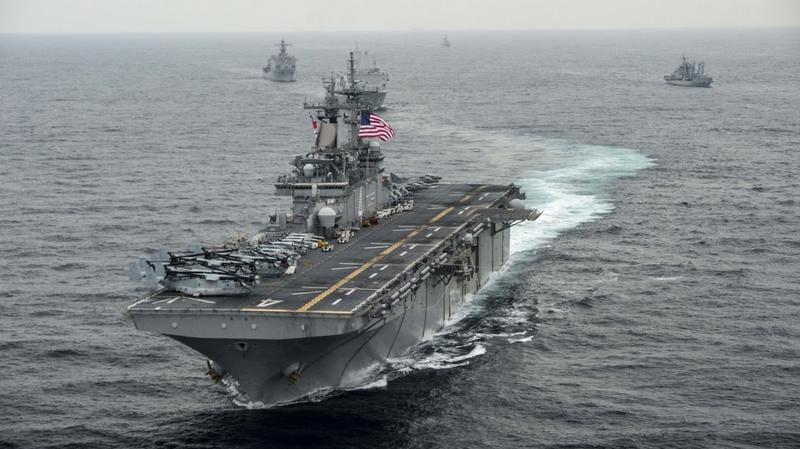 WASHINGTON — A US warship on Thursday destroyed an Iranian drone in the Strait of Hormuz after it threatened the ship, US President Donald Trump said. The incident marked a new escalation of tensions between the countries less than one month after Iran downed an American drone in the same waterway and Trump came close to retaliating with a military strike.

Trump said the Navy's USS Boxer, an amphibious assault ship, took defensive action after the Iranian aircraft closed to within 1,000 yards of the ship and ignored multiple calls to stand down

In remarks at the White House, Trump blamed Iran for a "provocative and hostile" action and said the US responded in self-defense.

Iranian Deputy Foreign Minister Abbas Araqchi denied that Iran had lost a drone in the Strait of Hormuz.

"We have not lost any drone in the Strait of Hormuz nor anywhere else. I am worried that USS Boxer has shot down their own UAS [Unmanned Aerial System] by mistake!," Araqchi said on Twitter.

The clash in one of the busiest waterways for international oil traffic highlighted the risk of war between two countries at odds over a wide range of issues. After Trump pulled the United States out of the Iran nuclear deal last year and imposed additional economic sanctions, the Iranians have pushed back on the military front, allegedly sabotaging Saudi and other oil tankers in the Gulf, shooting down a US drone on June 20 and stepping up support for Houthi rebels in Yemen.

Adding to the economic pressure on Tehran, the Treasury Department said Thursday it was imposing sanctions on what it called a network of front companies and agents involved in helping Iran buy sensitive materials for its nuclear program.

Trump said the Navy's USS Boxer, an amphibious assault ship, took defensive action after the Iranian aircraft closed to within 1,000 yards of the ship and ignored multiple calls to stand down.

"The United States reserves the right to defend our personnel, facilities and interests and calls upon all nations to condemn Iran's attempts to disrupt freedom of navigation and global commerce," Trump said.

The Pentagon said the incident happened at 10 am local time Thursday in international waters while the Boxer was transiting the waterway to enter the Persian Gulf. The Boxer is among several US Navy ships in the area, including the USS Abraham Lincoln, an aircraft carrier that has been operating in the nearby North Arabian Sea for weeks.

"A fixed-wing unmanned aerial system approached Boxer and closed within a threatening range," chief Pentagon spokesman Jonathan Hoffman said in a written statement. "The ship took defensive action against the UAS to ensure the safety of the ship and its crew."

Neither Trump nor the Pentagon spelled out how the Boxer destroyed the drone. CNN reported that the ship used electronic jamming to bring it down rather than hitting it with a missile.

Neither Trump nor the Pentagon spelled out how the Boxer destroyed the drone. CNN reported that the ship used electronic jamming to bring it down rather than hitting it with a missile

The Iranians and Americans have had close encounters in the Strait of Hormuz in the past, and it's not unprecedented for Iran to fly a drone near a US warship.

In December, about 30 Iranian Revolutionary Guard vessels trailed the USS John C. Stennis aircraft carrier and its strike group through the strait as Associated Press journalists on board watched. One small vessel launched what appeared to be a commercial-grade drone to film the US ships.

Thursday's incident was the latest in a series of events that raised US-Iran tensions since early May when Washington accused Tehran of threatening US forces and interests in Iraq and in the Gulf. In response, the US accelerated the deployment of the Lincoln and its strike group to the Arabian Sea and deployed four B-52 long-range bombers to the Gulf state of Qatar. It has since deployed additional Patriot air defense missile batteries in the Gulf region.

Shortly after Iran shot down a US Navy drone aircraft on June 20, Trump ordered a retaliatory military strike but called it off at the last moment, saying the risk of casualties was disproportionate to the downing by Iran, which did not cost any US lives.

Zarif said Thursday that Iran and the US were only "a few minutes away from a war" after Iran downed the American drone. He spoke to US-based media on the sidelines of a visit to the United Nations.

At the meeting, Zarif also said Iran would be willing to move up an Iranian parliament ratification of an agreement Tehran made with the International Atomic Energy Association — one that outlined access to Iranian nuclear sites and other information.

A spokesman for Zarif explained that Iran is already abiding by the agreement under the 2015 nuclear deal, but it doesn't have the force of law because it's not supposed to be ratified by the Iranian parliament until 2023. Zarif told reporters that the ratification could come earlier if the US eased sanctions.

A senior administration official responded that Trump has repeatedly said he is willing to have a conversation with Iranian leaders. The official said that if Iran wants to make a "serious gesture," it should immediately stop enriching uranium and negotiate an agreement that includes a permanent end to Iran's nuclear ambitions, including development of nuclear-capable missiles. The official was not authorized to publicly discuss the issue and spoke only on condition of anonymity.

Zarif blamed Washington for the escalation of tensions.

Earlier Thursday, Iran said its Revolutionary Guard seized a foreign oil tanker and its crew of 12 for smuggling fuel out of the country, and hours later released video showing the vessel to be a United Arab Emirates-based ship that had vanished in Iranian waters over the weekend.

The announcement cleared up the fate of the missing ship but raised a host of other questions and heightened worries about the free flow of traffic in the Strait of Hormuz, one of the world's most critical petroleum shipping routes. One-fifth of global crude exports pass through the strait.