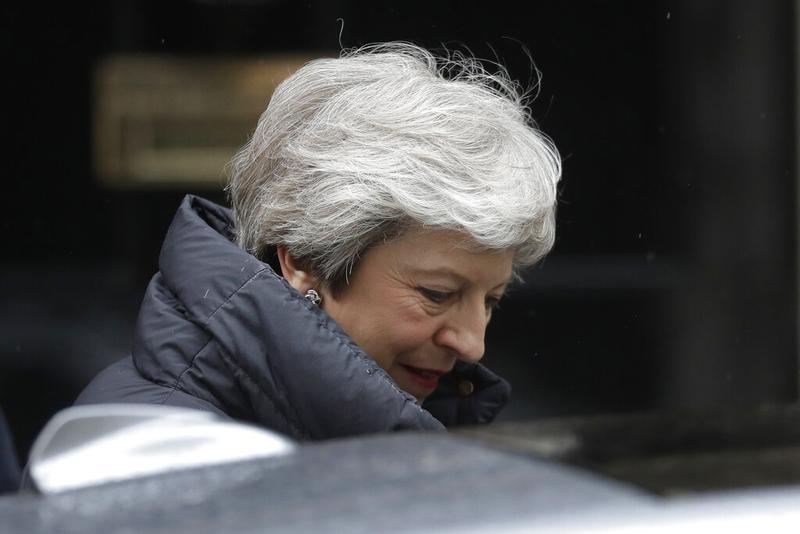 LONDON - British Prime Minister Theresa May's Conservatives have slumped to fifth place in an opinion poll ahead of the May 23 European parliamentary election as pressure grows on her to set a date for her departure.

Nigel Farage's Brexit Party was in the lead, up four percentage points, on 34% while May's Conservative Party had just 10%, the YouGov poll for the newspaper showed. The opposition Labour Party was down five points on 16%.

Nigel Farage's Brexit Party was leading with 34% while May's Conservative Party had just 10%, the YouGov poll for the Times newspaper showed. Opposition Labour was at 16%

Two parties which support staying in the EU, the Liberal Democrats and the Greens, were on 15% and 11% respectively.

Nearly three years since the United Kingdom voted 52% to 48% to leave the European Union, there is still no agreement among British politicians about when, how or even if the divorce should take place.

"There is a massive appetite for the Brexit Party right now because people want to live in a democratic country,” Farage said. "We have been betrayed, not just by the Conservatives,Labour have done the same thing too."

Britain was due to have left the European Union on March 29,though May has been unable to get her divorce deal approved by parliament so she has turned to the Labour Party, led by socialist Jeremy Corbyn, in a bid to court his support.

Asked if talks with Labour could lead to a possible Brexit consensus, Communities Secretary James Brokenshire said: "I think these talks are very serious, yes, we wouldn't have committed all of the time and effort on sides in relation to this.

"They have been constructive. I very much want to see them concluding positively because ultimately we need to carry a votein parliament to see that we leave," he told BBC radio.

The new deadline for leaving the EU is Oct. 31 though many Brexit supporters fear that the whole divorce could be derailed.

"We are at real risk of sleepwalking into remaining in the EU," Brexit Secretary wrote in the Sun newspaper.

"That is why I believe that it would be inexcusable for the Government to not use the coming months to continue to prepare for the real risk we leave the EU without a deal."

He later wrote in Twitter that in a choice between a no deal exit or staying in the EU, he would vote to leave without agreement.
Meanwhile, Brexit talks between Britain's Conservative government and the Labour Party are resuming with little sign of progress, as the two parties remain far apart on terms of the UK's departure from the European Union.

Senior Conservative and Labour officials have been meeting for weeks in an attempt to find a compromise Brexit deal that can win majority support in Parliament.

Labour Brexit spokesman Keir Starmer told Monday's Guardian newspaper his party would only support a deal if was put to a referendum vote.

Starmer said that as many as 150 of Labour's 246 lawmakers "would not back a deal if it hasn't got a confirmatory vote."

Theresa May has rejected a new referendum, saying voters made their decision in 2016 when they narrowly opted to leave the EU.

Foreign Secretary Jeremy Hunt said it was "a crunch week" for the talks.