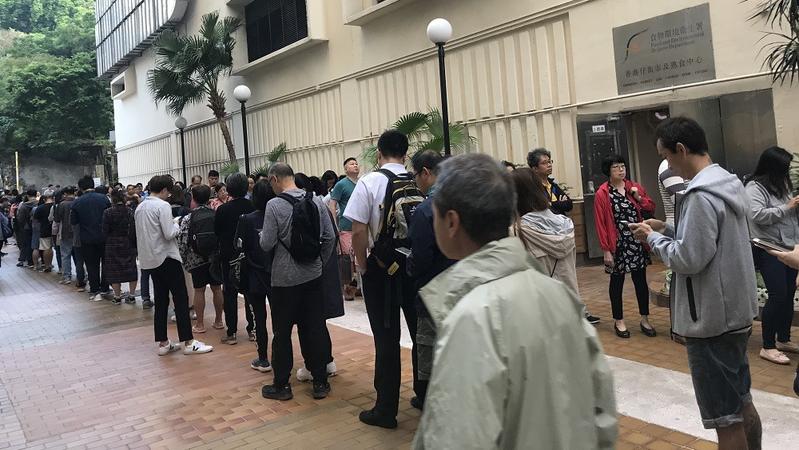 HONG KONG - Polling in Hong Kong district Council election closed at 10:30 pm with a record turnout of 71.2 percent, with around 2,940,000 of 4,132,977 registered voters having cast their ballots, according to provisional  figures.

Voting began peacefully at 7:30 am on Sunday morning and by 1:30 pm, 1,524,675 people had cast their votes, surpassing 1,467,229 who had voted in the previous edition of the district council election in 2015. Within the first four hours, nearly a quarter of the electorate had voted.

A record 1,090 candidates are running for 452 district seats and a record 4.1 million Hong Kong people have enrolled to vote for district councillors

IN PHOTOS: Long queues as voting begins in Hong Kong

Hong Kong's Chief Executive Carrie Lam Cheng Yuet-ngor cast her vote shortly before 9 am. Lam said a smooth election is expected to break the current impasse and restore peace in Hong Kong. She appealed to every registered elector to vote Sunday, stressing the government will respect their choices.

"The polling hours for ordinary polling stations are from 7:30 am to 10:30 pm today, 15 hours in total. Long queues have been formed in some polling stations this morning, because electors cast their votes at approximately the same time" a spokesman for the Electoral Affairs Commission (EAC) said. He urged voters to wait in an orderly manner till the time polling staff could serve them.

Barnabas Fung Wah, chairman of the Electoral Affairs Commission, appealed to eligible voters to be patient and respect others’right to vote. The call came after Fung saw long queues at multiple polling stations.

"There is no need to cast your vote in a rush," he said, adding that any voter who has queued up before the polling hours end at 10:30 pm will be able to vote.

A record 1,090 candidates are running for 452 district seats and a record 4.1 million Hong Kong people have enrolled to vote for district councillors, who control some local spending, and whose daily decision making spans a range of neighborhood issues including recycling, transport and public healthcare. 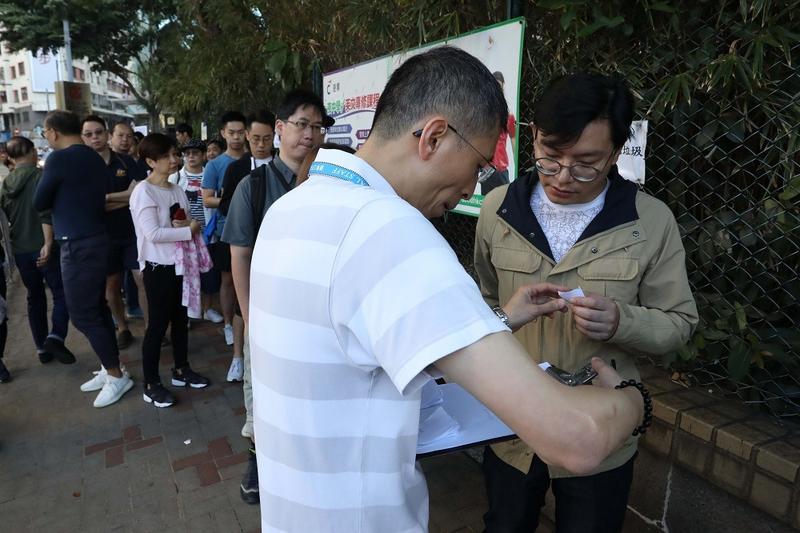 An electoral staff checks particulars of a voter outside the polling station at Queen's College in Causeway Bay, Hong Kong, in the morning of Nov 24, 2019. (PHOTO / CHINA DAILY)

Casting his vote in Sha Tin, Secretary for Constitutional and Mainland Affairs Patrick Nip Tak-kuen called on Hong Kong citizens to contribute to a peaceful and fair election.

Tung Chee-hwa, vice-chairman of the Chinese People’s Political Consultative Conference National Committee and former Hong Kong chief executive, said this was the best chance for Hong Kong people to ensure a better future for the city with their ballots.

Hong Kong lawmaker Junius Ho Kwan-yiu, stabbed during an election campaign two weeks ago, appealed to all Hong Kong people Sunday to cast their ballots. He said it was a shared duty of the community to quell violence and restore order.

Henry Tang Ying-nien, former chief secretary for administration, said the high turnout rate suggests that voters have taken their responsibility as Hong Kong citizens seriously. Tang said he hoped after the election, the government will step up its efforts to stop the violence, heal the social divide and restore peace and order in Hong Kong.

Hong Kong Chief Secretary Matthew Cheung said Saturday that the vote is a “real democratic exercise,” and that a strong police presence at polling stations will ensure that it proceeds smoothly.
Asked whether high profile patrol of police may spark tensions given the current relationship between the public and police, he said that it won’t deter any people.