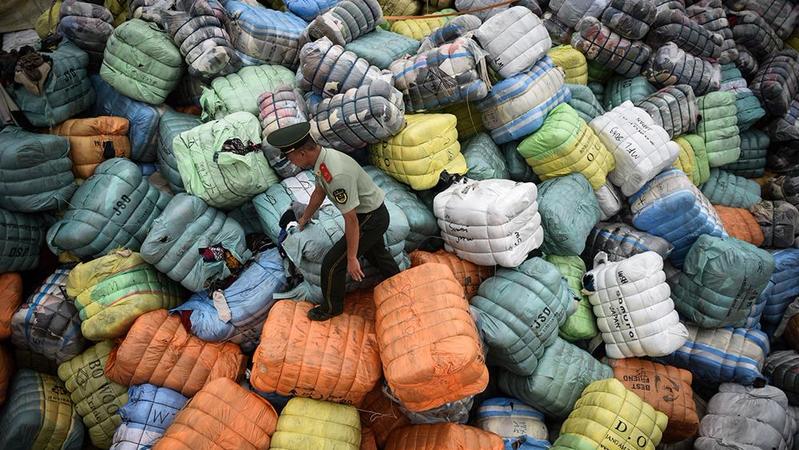 China's environmental watchdog has approved two action plans, vowing to further crack down on the smuggling of overseas garbage while maintaining a tough stance against pollution caused by processing of imported waste.

The 2018-20 action plan for implementation of the country's reform plan to ban waste imports and the 2018 action plan for inspections on pollution caused by processing imported waste were approved on Monday by the first executive meeting of the newly established Ministry of Ecology and Environment.

"The ban on foreign garbage imports is a landmark measure for the country's construction of an ecological civilization and should be implemented unswervingly and effectively," the ministry said in an online statement.

"The border controls on illegal foreign garbage will be intensified and the entire process in the industry will be inspected," it said.

The ministry also said it will ensure adequate resources and manpower for the inspection campaign on imported waste processing by coordinating local government bodies.

"A tough stance will be kept in the problem-oriented campaign to crack down on enterprises with environmental violations," the statement said.

Details of the action plans were not disclosed.

Jiang Jianguo, a professor at Tsinghua University's School of Environment, said imported waste had caused severe pollution in China. "Much of the waste is processed by small enterprises that failed to dispose the invaluable but polluting objects in the waste."

He said there has been an increasing amount of solid waste in China that also needs recycling.

Wen Zongguo, an expert on circular economy at Tsinghua, said the ban will help enhance pollution control work in the country while promoting the development of China's recycling industry.

"As waste importers turn to domestic sources, their requirement on waste quality will help collecting enterprises improve sorting and disposal, contributing a lot to pollution control," he said.

Foreign Ministry spokeswoman Hua Chunying also defended China's policy on banning solid waste imports after a US official expressed in a World Trade Organization meeting last Friday that the ban could cause a fundamental disruption in global supply chains for scrap materials.

According to the Basel Convention on the Control of Transboundary Movements of Hazardous Wastes and their Disposal, every country has the right to ban the entry of foreign hazardous waste and other sorts of waste.

"We hope that the US can reduce and manage hazardous waste and other waste of its own and take up more duties and obligations," said Hua.

According to a reform plan released in July 2017 by the State Council, China will phase out imports of solid waste that can be replaced by domestic resources by the end of 2019.

China started to import solid waste as raw materials to make up for the domestic shortage of resources in the 1980s, but some companies have illegally smuggled "foreign garbage" into the country for profit, damaging the environment and public health.