Life outside the lines

How does one capture the soul of a living creature? Now Zeng Xiaolian, in his 80s after a lifetime as a botanical artist on vital government projects, has set out full of optimism that he can do it. Chen Zimo writes. 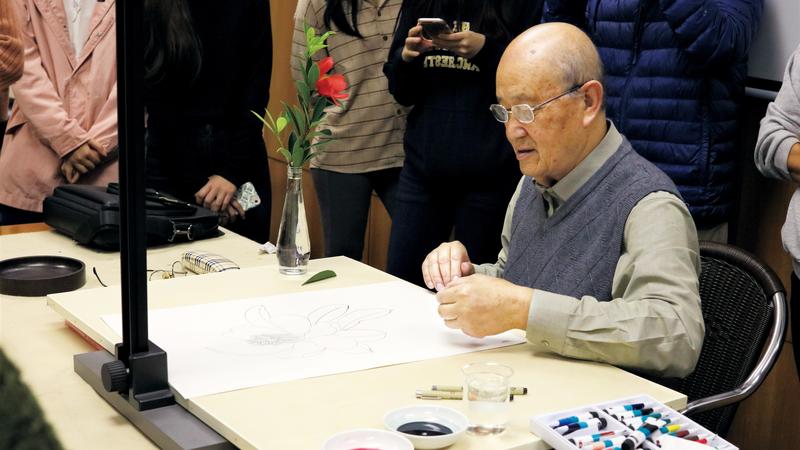 After 60 years of drawing scientific illustrations of plants, Zeng Xiaolian now wishes to reveal their “souls”.

Zeng, now in his 80s, started working as a biological artist in 1958. He was only 19. He spent the next 39 years — almost — drawing illustrations for scientific research. He drew more than 2,000 images for over 50 science projects. He continues his work today, unabated, though he’s long since retired.

“I have time now to draw the things that attract me,” Zeng said. Those precious things are plants, birds and animals, even common creatures like squirrels.

Every species has an internal drive to project its energy outwards. This kind of expressiveness cannot be realized by looking at photos or specimens alone

Right after graduation from high school Zeng was assigned to the Kunming Institute of Botany, in the capital of Yunnan province. It’s a first-class facility in the province with the richest biodiversity in China.

“It’s a national scientific project that every country must do,” Zeng said. Drawing plants was not just a career he loved. It became an important responsibility assigned to him by his motherland.

Zeng was one of the 164 illustrators who worked on the project, which also involved some 300 botanists from all over China. It was a long-term commitment. Forty-six years after the atlas was begun, the work was completed. Zeng had been retired for seven years by that time.

“My whole life was dedicated to Chinese flora,” said Zeng.

Zeng didn’t work on the atlas continuously. While working on that endeavor, Zeng was reassigned to the famous Project 523. It was a project named for May 23, 1967, the date the central government embarked on a mission to find a medicine to prevent and cure malaria, during the Vietnam War.

Zeng spent three years on the border between Yunnan province and Laos, Myanmar, and Vietnam working on the 523 project. He had been assigned to an area covered by thick virgin forests, to illustrate potential anti-malarial plants. He was instructed to submit his drawings to research institutions experimenting on the medicine.

“In those primeval forests, I saw real Nature, which is the most ingenious creation,” Zeng said.

The project was an amazing success. Leading scientist Tu Youyou won the 2015 Nobel Prize in Physiology or Medicine.

Zeng went back to work on the botanical atlas project, after an absence of three years. He had turned 30 by then. He’d already made up his mind that someday, when he had time, he was going to paint the landscapes and creatures that he met on his journey. 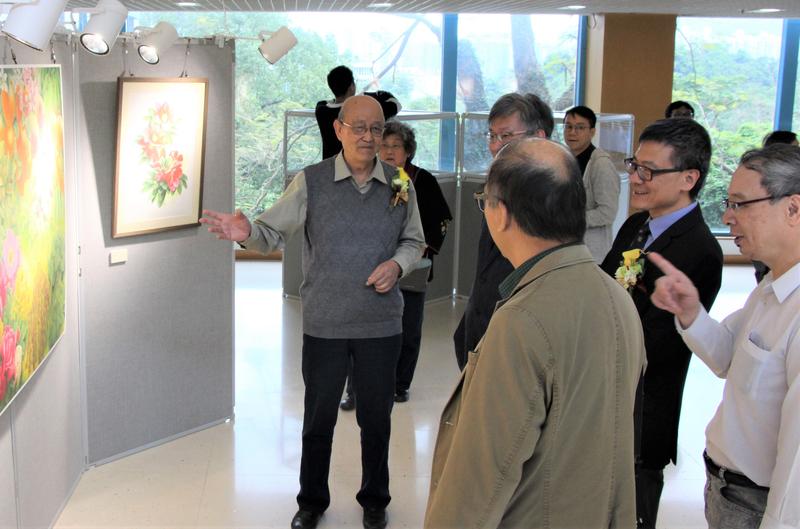 Zeng entered retirement with a long queue of intended projects.

In the 21 years since, he has never stopped working. He’s published nine books, including painting collections and painting textbooks. He has painted stamps for the State post office more than 10 times.

Lately, he just finished a giant painting, Chinese Plants That Changed the World. The painting was created for the 2019 International Horticultural Exposition to be held in Beijing.

This painting is 2.5 meters long and 1.17 meters wide. It depicts 37 plants which grew first in China then spread out in the world. Included among them are rice, mulberry, the Chinese rose, and bamboo.

Zeng’s plan for 2019 is to take another project, reproducing plants mentioned in the Classic of Poetry, the oldest poetry collection in China. The year after that he plans to take an around-the-world pilgrimage, painting ancient trees, as long as his health holds out.

When working on the flora of the country’s atlas, Zeng usually made reference to plant specimens collected by science institutes. Sometimes he found his subjects in a biological garden. But he always prefers taking a trip outside to the Nature, whenever he has the chance.

“Every species has an internal drive to project its energy outward. This kind of expressiveness cannot be realized by looking at photos or specimens alone,” Zeng said.

A plant, vigorous in its natural environment, gave him a feeling he was able to communicate with the plant, almost “face to face”, he explained. In extremely harsh environment unfavorable to humans, one cannot be more clear that a flower blossoms only for itself, regardless of whether it is recognized and appreciated or not.

“Without experiencing that directly, one cannot depict the vitality of plants,” Zeng said.

Observation is more vital when it comes to animals. When collecting materials for his bird atlas, Zeng went to the zoo every day and recorded more than 20 notebooks of sketches.

Zeng captured birds’ in the midst of flying, hopping and evening dancing. Then he painted his interpretation of the postures making reference to specimens to maintain accuracy.

The illustrations of Flora of the PRC are black and white, with only lines to show the structure and texture of individual plants. Now Zeng has added color and composition. He borrowed techniques from traditional Chinese painting.

When he drew a picture of a grove of majestic sequoias in California, he was impressed by the enormity and grandeur of the sequoias. He named the painting “The imposing bearing on foreign land”. His previous works, following every microscopic detail of the tiniest parts of a single plant, could never have expressed such spiritual and emotional feeling. 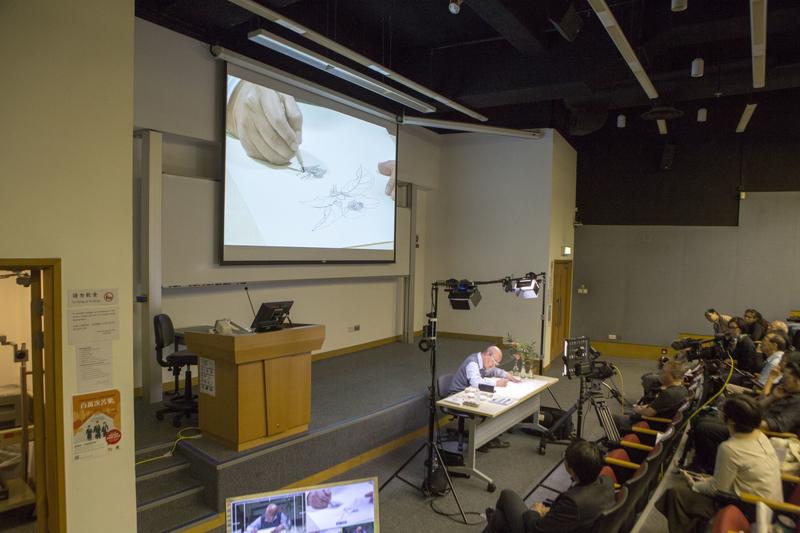 Zeng gives a lecture at Chung Chi College of the Chinese University of Hong Kong. (PHOTO PROVIDED TO CHINA DAILY)

In 1992, the School of Life Science at the Chinese University of Hong Kong invited Zeng to draw illustrations for a book on the ecology of plants in Hong Kong. The book, titled Flora of Hong Kong, records nearly 3,000 species of native and imported plants in the city.

Zeng was responsible for painting composite plant, the largest family of angiosperms. China has more than 2,000 species of the genre.

He worked with a group of the best botanists in Hong Kong, including the late professor Hu Shiu-ying, who had produced over 160 academic treatises and collected over 30,000 specimens until she died in 2012.

Zeng held an individual exhibition and a joint exhibition in Hong Kong in 1992 and 2002. His third exhibition was held in November 2018, comprised of over 40 drawings that depict flowers, trees and animals.

In recent years Zeng has been so busy working he rarely holds exhibitions and does not attend exchange programs any more. When he received the invitation from the CUHK, he immediately accepted and started to make preparations. Zeng credited his enthusiasm for the work to the wonderful memories he had of Hong Kong.

Zeng observes that scientific illustration is a mainstay of botany, traditionally. He says photography can’t serve as a replacement despite rapid progress of technology.

“The illustrator can choose to highlight the most important features of plants, making them more educational than (they are) identical to the object,” he said.

That is the point where the scientific illustrators carefully balance science with art. They commit to record the characteristics of creatures, based on the research of biologists. But illustrators cannot satisfy their artistic desire to make every image a work of art. There is one unbreakable principle — never distort the true appearance of the subject.

Strictly obeying the rule for his entire life, Zeng has never slackened on his determination to portray with accuracy, even as he has had the freedom to infuse more aesthetics in his work. During his career he set out to freeze life on paper. Now he tries to look deeper to see their beauty, vitality and even their souls.