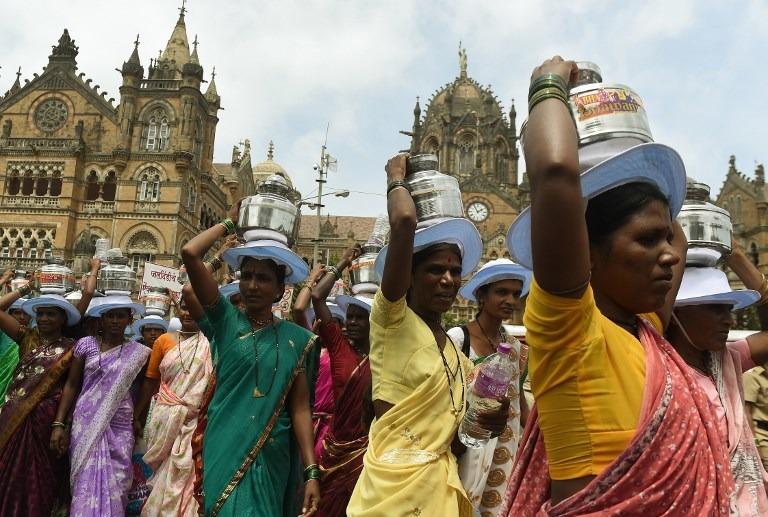 Indian villagers from drought affected areas carry pots as they take part in a rally to spread awareness on water usage in Mumbai on May 17, 2016. (PUNIT PARANJPE / AFP)

NEW DELHI - India is facing its worst-ever water crisis in its history, according to a report prepared by Indian government's ace think tank and policy adviser the National Institution for Transforming India (NITI Aayog) on Friday.

Currently 600 million Indians face "high to extreme" water shortage and about 200,000 people die every year due to inadequate access to potable water, according to the report.

The water crisis will get worse as India's water demand is projected to be twice the available supply by 2030, implying severe water scarcity for hundreds of millions of people and an eventual 6 percent loss in the country's GDP, according to the report.

The report, titled Composite Water Management Index, was prepared by the NITI Aayog in association with India's Ministry of Water Resources, the Ministry of Drinking Water and Sanitation, and the Ministry of Rural Development.

NITI Aayog is India's premier policy think tank providing both directional and policy inputs to the government. While designing strategic and long-term policies and government programs, it also provides relevant technical advice to the center and states.

In the report, further information was stated indicating that as many as 21 major Indian cities are most likely to run out of groundwater by 2020, thereby affecting nearly 100 million people.

The report also indicated data by independent agencies, pointing out that India's nearly 70 percent of water is contaminated, which puts the country at the 120th position among 122 countries in the water quality index.

The low performing states are mainly the populous ones like Uttar Pradesh, Bihar, Rajasthan, Haryana, among others. These states are home to over 600 million people, and account for 20-30 percent of the country's agricultural output.

"Thus, there is an imminent need to deepen our understanding of our water resources and usage and put in place interventions that make our water use efficient and sustainable," reads the report.