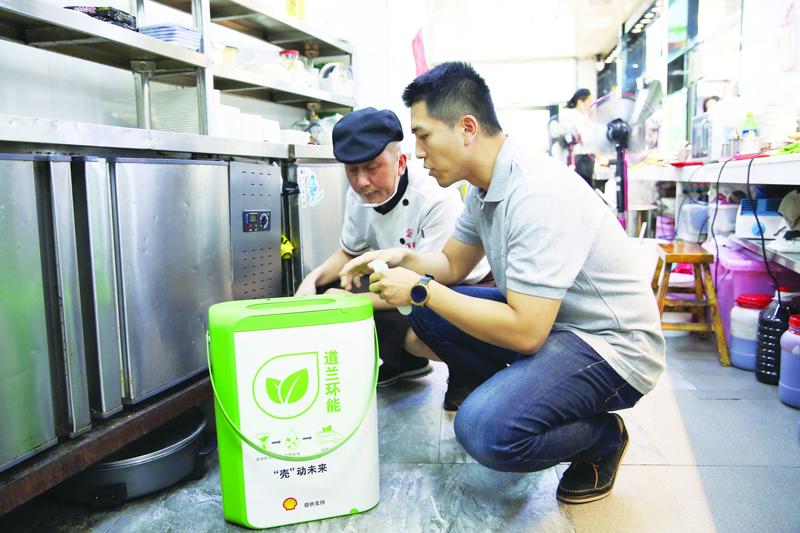 Startup company MotionEco on June 10 kicked off a China-first initiative in the city of Nanjing to collect waste cooking oil and gutter oil to be converted into sustainable, low-carbon green fuel for use in diesel vehicles.

The launch at Nanjing’s historic city center, in East China’s Jiangsu province, was held in the presence of local government officials, major supply-chain partners and a public audience, the company said on its website.

The launch marks China’s first commercial effort to collect and process used cooking oil and gutter oil using a completely open and transparent tracking system to ensure that used cooking oil is never processed back into food products for human use.

What we are trying to do is create a market for renewable diesel made from used cooking oil that can be used in transportation, public services and logistics — anywhere that conventional diesel is used

The problem of gutter oil has plagued China for as long as anyone can remember.

Although the practice is illegal, some unscrupulous people still filter waste oil from restaurant fryers, sewer drains, grease traps and other sources to sell it on to be reused.

The toxic oil has been blamed for making people sick and causing some forms of cancer. But people continue to use it because it is cheaper than buying real cooking oil.

China is the world’s biggest consumer of cooking oil. It also generates millions of tons of waste oil every year.

Founder Liu Shutong started MotionEco three years ago with the aim of solving the problem of gutter oil by turning the waste into clean-burning biofuel suitable for road, marine and air transport use.

In conjunction with oil company Shell’s “Make the future” brand campaign in China, MotionEco is working to create a distribution channel for the steady production and consumption of gutter-oil-sourced biofuels throughout the country. The distribution model is called the Sustainable Oil Alliance.

Green fuel, completely produced by waste products, not only eliminates waste cooking oil from the food chain, it also provides a high-energy, high-quality transportation fuel that, when burned, is responsible for 90 percent less carbon dioxide emissions than the same amount of traditional diesel fuel.

“We want to convert every city into a green oil field, to collect and convert the local waste oil into green fuel, supply to the local logistics fleet, to keep the food safe (and) at the same time contribute to the environment,” Liu said.

MotionEco aims to provide 50,000 liters of green fuel this year to Nanjing, according to the company.

Shell is collaborating with MotionEco to help explore how to simultaneously tackle the challenges of food safety, waste cooking oil and sustainable transport in a Chinese city.

MotionEco hopes that by linking waste cooking oil collectors with biodiesel producers it will encourage transportation companies to switch to the eco-friendly fuel.

“One of the aims of the company is to try and provide solutions … to try and solve the social and environmental issues caused by the reuse of waste oil,” Liu told China Daily.

“What we are trying to do is create a market for renewable diesel made from used cooking oil that can be used in transportation, public services and logistics — anywhere that conventional diesel is used.

“In that way we break the cycle of cooking oil reuse in kitchens to provide clean, sustainable, low-carbon fuels to power diesel engines.

“The project will be commercially viable once we establish a chain of collecting used oil, converting the oil, and then selling the oil to (transportation sector) customers.”

He said by starting in Nanjing the company aims to “step up from here to achieve a cleaner and more sustainable way of energy consumption in China by converting gutter oil that might go to restaurants’ kitchens into biofuel that can be used in the transportation sector”.

The company has said it is building “bridges between producers of green fuel and diesel users that wish to clean up their transportation services and supply chains, helping to provide energy and climate security for China and the world”.