Japan resists US pressure on FX ahead of Abe-Trump summit 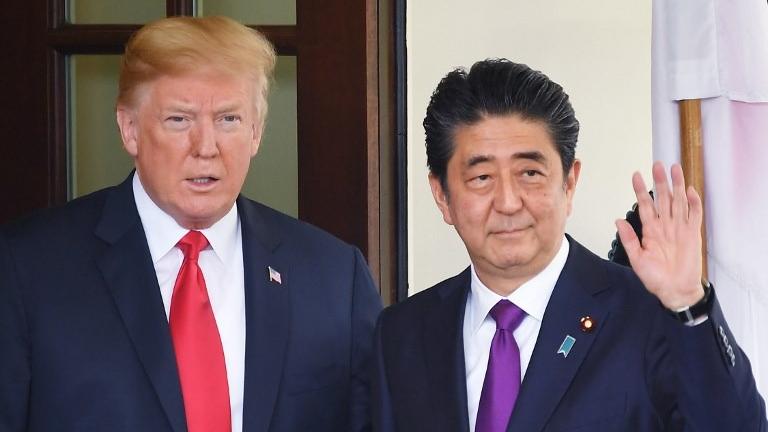 WASHINGTON/TOKYO — Japan is resisting increasing US pressure to link trade with currency issues as leaders of the two close allies are set to hold a summit in Washington on Friday, with trade and Democratic People’s Republic of Korea high on the agenda.

Japanese ministers discussed trade and currency issues with their US counterparts in Washington ahead of the summit between Prime Minister Shinzo Abe and US President Donald Trump, in a last-minute bid to keep Washington from linking the issues.

Trump has made clear he is unhappy with Japan’s trade surplus with the United States - much of it from auto exports - and wants a two-way deal to fix it.

Trump and Abe agreed last September to start trade talks in an arrangement that protects Japanese automakers from further tariffs while negotiations are going on.

US Treasury Secretary Steven Mnuchin had said that in future trade deals, including one with Japan, the United States would like to include a provision to deter forex manipulation.

Japan has resisted the idea, out of fear that it could tie its hands in monetary policy and any future attempts to keep an unwelcome yen spike in check.

“I told him that Japan cannot agree to any debate linking trade policy with monetary policy,” Aso told reporters after a bilateral meeting with Mnuchin.

Aso declined to comment when asked whether, in his meeting with Mnuchin, the US side had made demands to include a currency provision in trade deals between the two countries.

Currencies are a touchy issue for Japan because it has been criticized for keeping the yen low with massive monetary easing.

Bank of Japan’s Executive Director Eiji Maeda told parliament on Friday that its ultra-easy monetary policy was aimed at achieving its 2 percent inflation target, not at gaining export advantage by weakening its currency.

A really bad outcome on the trade side would be if the president not only doesn’t agree to opening auto parts, tariffs, but demands voluntary export restraints of autos from Japan

Motegi was quoted as telling reporters that he did not expect a big difference of opinions between Abe and Trump in their upcoming talks.

Japanese media cited Motegi as saying that immediate results were not in the offing, indicating difficulty in striking a deal on contentious issues such as US auto tariffs and Japan’s highly protected agriculture sector, including rice and beef.

Some analysts say trade looms large, especially as Abe’s ruling Liberal Democratic Party faces upper house elections this summer, in which the LDP needs to appeal to farmers, who form its a main support base.

While Abe wants to avoid any outward signs of discord, the trade talks offer some opportunity for tension, they say.

“A really bad outcome on the trade side would be if the president not only doesn’t agree to opening auto parts, tariffs, but demands voluntary export restraints of autos from Japan,” said Michael Green, a Japan expert and former White House official, now at Washington’s Center for Strategic and International Studies.

US ambassador to Japan William Hagerty, speaking at the Hudson Institute, voiced hope that the trade talks will be taken care of “quickly.”

“We have had a long and persistent trade deficit with Japan. The Japanese market is not as open as our market is. So that is what the president is hoping to accomplish,” he said.