HONG KONG - A kind of drug used for treating peptic ulcer was found effective in suppressing the activity of drug-resistant superbugs in a research done by the University of Hong Kong which made the results public on Thursday.

Antimicrobial resistance posed by superbugs has been a major public health issue of global concern. Drug-resistant infections kill around 700,000 people worldwide each year, and the figure could increase up to 10 million by 2050, according to figures of the World Health Organization.

The university's research team discovered that colloidal bismuth subcitrate (CBS), an antimicrobial drug against Helicobacter pylori-related ulcer, can effectively paralyze multidrug-resistant superbugs, including Carbapenem-resistant Enterobacteriaceae (CRE) and Carbapenem-resistant Klebsiella pneumoniae (CRKP), which can cause deadly infections such as bacteremia, pneumonia, and wound infections.

NDM-1 (New Delhi Metallo-Beta-lactamase 1) is one of the leading resistant determinants that demonize common bacteria into CRE superbugs. The NDM-1 carrying CREs is lethal and extremely difficult to treat, which poses a great threat to public health. Scientists report that NDM-1 superbugs have now been disseminated to over 70 countries or regions across the world. 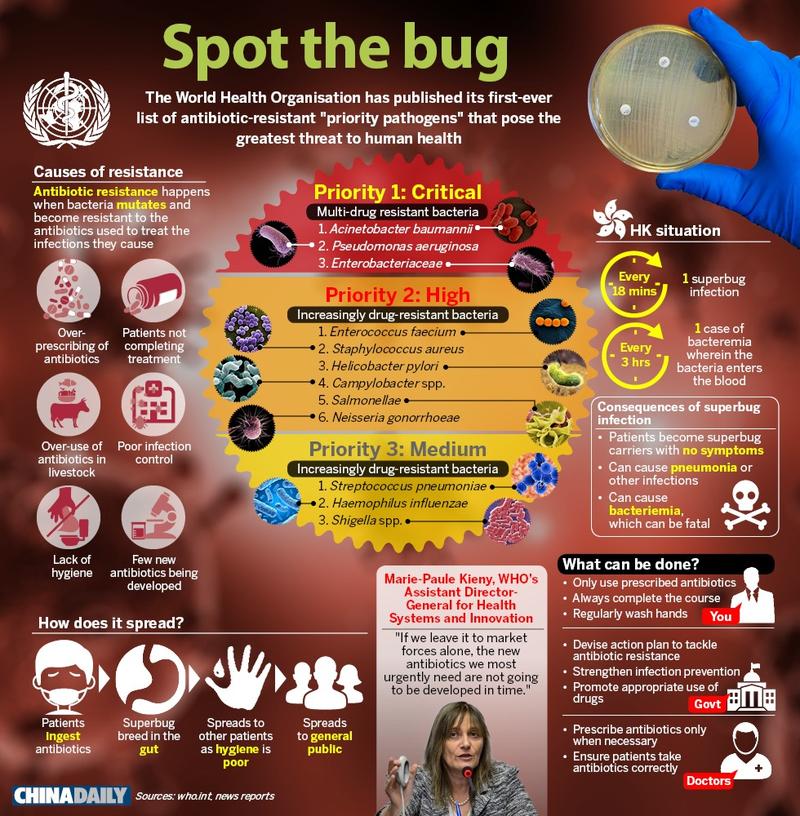 The research team revealed that CBS can "tame" the superbug by reducing it to almost sensitive strain which can be easily killed by commonly used Carbapenem antibiotics.

More importantly, the brand-new therapy allows the dose of antibiotics to be reduced by 90 percent to attain the same level of effectiveness, and the development of NDM-1 resistance to be significantly slowed down, which will largely extend the life cycle of currently used antibiotics.

READ MORE: WHO warns of spread of untreatable superbug gonorrhoea

"We hope CBS-based combination therapy will open up a new horizon for the treatment of infection caused by superbugs, serving as a new and more economical therapy to solve the problem of antimicrobial resistance," said Sun Hongzhe, professor of the university's chemistry department.

The findings were published in Nature Communications in January 2018 and a patent has been filed in the United States for the discovery.