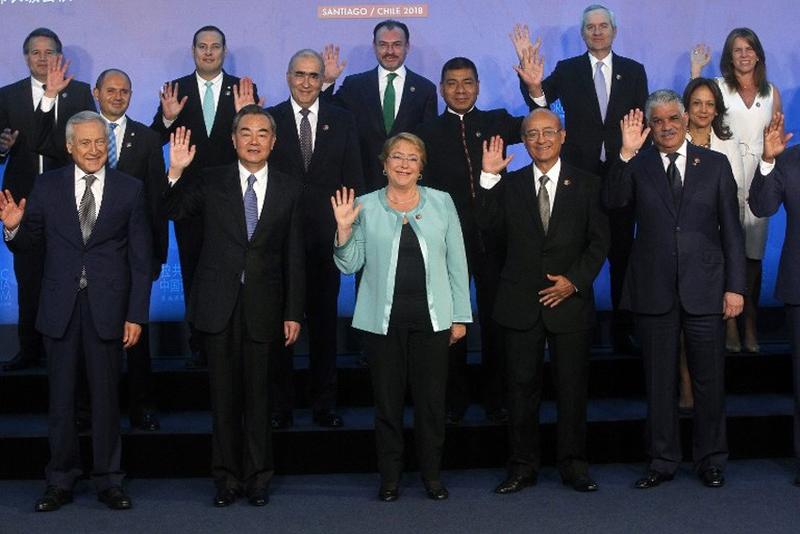 SANTIAGO – Chinese Foreign Minister Wang Yi on Monday hailed the achievements made by the cooperation between China and Latin American and the Caribbean (LAC) countries over the past three years and urged relevant countries to keep the momentum.

Wang made the call while attending the second ministerial meeting under the framework of China and the Community of Latin American and Caribbean States (CELAC) Forum. The inaugural meeting of the mechanism was held in Beijing in January 2015.

During his speech, Wang read from a congratulatory letter from Chinese President Xi Jinping, who spoke highly of the development of the China-CELAC Forum in the three years following its inception and proposed that the China-LAC partnership be led by joint efforts to implement the Belt and Road Initiative.

Cooperation under the China-CELAC Forum, Wang noted, has achieved fruitful results thanks to both sides sticking to the principles of mutual respect and equal treatment, as well as their consistent commitment to jointly seeking cooperation and development.

Wang said the mechanism achieved early harvests in 13 key projects in the past three years covering areas such as trade, finance and energy. China has been steadfastly implementing a package of financing arrangements for its partners, he added.

In addition, Wang said the social foundation for the China-LAC partnership has been further consolidated, with China delivering its promises by granting government-sponsored scholarships to students from LAC countries, organizing personnel training and promoting exchanges among political parties.

Exchange programs between the two sides have also benefited young scientists and people in the media industry, according to him. The ministerial-level dialogues, the national coordinators' meetings, as well as the 17 rounds of forums covering a broad spectrum of areas have built the mechanism into an institutionalized one, Wang pointed out.

As the partnership sails toward the next phase, the foreign minister suggested that China and the LAC countries seize the opportunity of jointly building the Belt and Road, promote cooperation under what is known as the "1+3+6" framework, and strive for an upgrading and innovative development of China-LAC cooperation.

In July 2014, Xi laid out the "1+3+6" cooperation framework in his keynote speech at a China-LAC summit held in Brasilia, Brazil.

The "1" refers to the China-LAC Countries Cooperation Plan 2015-2019 by which specific cooperation projects should be guided. The "3" identifies three driving forces for cooperation, namely trade, investment and finance. The "6" prioritizes six fields of cooperation, including energy and resources, infrastructure construction, agriculture, manufacturing, scientific and technological innovation, as well as information technology.

Wang made a four-point suggestion, saying China and the LAC countries should jointly build "grand connectivity" covering both sea and land, cultivate "grand markets" that are open and reciprocal, create "grand industries" featuring advanced and independent technologies, and launch "grand communication" based on equality and mutual trust.

Officials representing LAC countries at the meeting lauded the cooperation outcomes in the past three years and the active role the China-CELAC Forum played during the process. 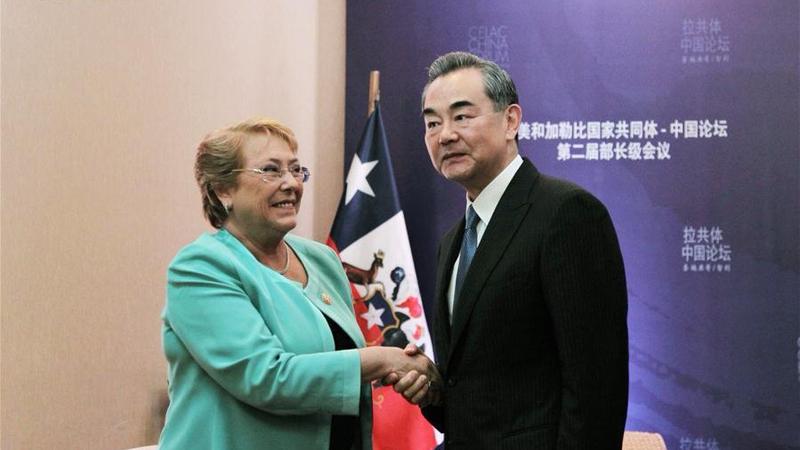 Comprehensively deepening the Chilean-Chinese cooperation has become the consensus of all Chilean parties, Bachelet said, adding that the Belt and Road Initiative provides a fresh opportunity for the development of Latin-America.

Wang said more achievements are expected under the framework of the comprehensive strategic partnership between China and Chile, and more Latin-American countries are welcome to the joint efforts in building the Belt and Road.

Appreciating Bolivia's support for the Belt and Road Initiative, Wang told his Bolivian counterpart Huanacuni that China would like to further deepen bilateral cooperation with the country in various fields.

Huanacuni said the Belt and Road Initiative would help boost the common development of all countries and jointly tackle global challenges.

China has always supported Venezuela's legitimate efforts to safeguard sovereignty, and solve domestic issues through dialogue and consultation in line with its constitution, he said, adding that China is willing to further deepen the comprehensive strategic partnership with the country.