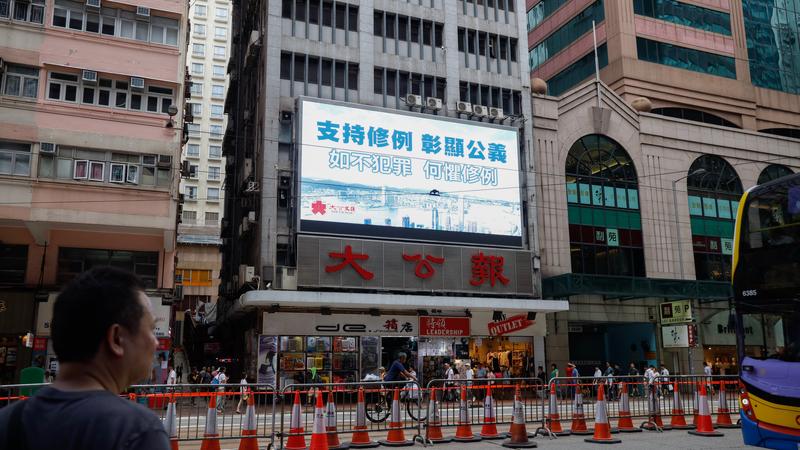 HONG KONG - Over 800,000 people in Hong Kong have pledged support for the SAR government’s plan to amend the city’s extradition laws, according to a citywide signature campaign on Sunday.

Stanley Ng Chau-pei, who’s also president of the Hong Kong Federation of Trade Unions, the city’s largest labor group, urged the SAR government to stay firm in pushing ahead with the bill in the face of mass public support

The result came on the same day as police estimated about 240,000 people joined a public procession in the city to oppose the proposed bill.

The ongoing signature campaign, conducted online and at street stands, was launched on April 16 by an alliance of more than 30 local political, business and legal dignitaries in support of the proposed amendments.

According to the alliance, 822,960 people had signed up by midnight to back the government’s move to revise the Fugitive Offenders and the Mutual Legal Assistance in Criminal Matters ordinances in Hong Kong.

The special administrative region has agreements on reciprocal transfers of fugitives with 20 other jurisdictions, excluding Taiwan, Macao and the Chinese mainland.

The revision would allow Hong Kong to surrender fugitives on a case-by-case basis to jurisdictions that do not have long-term rendition agreements with the city.

Stanley Ng Chau-pei — a member of the alliance and a Hong Kong deputy to the National People’s Congress, the country’s top legislature — said the number of signatures collected so far shows that mainstream public opinion is behind the government in revising the extradition laws to plug relevant legal loopholes and safeguard public security.

Ng, who’s also president of the Hong Kong Federation of Trade Unions, the city’s largest labor group, urged the SAR government to stay firm in pushing ahead with the bill in the face of mass public support.

He urged opposition lawmakers to stop exaggerating and demonizing the bill, stressing that the law is only aimed at dealing with suspects of serious crimes, and will not affect law-abiding Hong Kong residents.

Ng said it’s intolerable for the opposition to invite other countries and foreign organizations to interfere in the internal affairs of both the nation and the HKSAR.

The alliance has submitted the latest results of the signature campaign to Under-Secretary for Security Sonny Au Chik-wong.

The Hong Kong Fishermen Consortium also threw its weight behind the government on Sunday by organizing a flotilla of 26 fishing boats that sailed through Victoria Harbour, carrying banners in support of the extradition bill.

At the same time, more than 20 large screens on commercial buildings across Hong Kong also displayed videos and slogans backing the amendments.

Lawmakers are set to resume the second reading of the amendment bill in the Legislative Council on Wednesday.

Solicitor Kennedy Wong Ying-ho — the convener and spokesman of the signature campaign alliance said members of the alliance will be at LegCo on Wednesday to support the amendments.

Wong hoped the legislature could pass the bill in order to improve Hong Kong’s extradition arrangements.

Wong, who’s also a member of the National Committee of the Chinese People’s Political Consultative Conference — the nation’s top political advisory body — noted that the alliance has distributed hundreds of thousands of flyers to help strengthen the public’s understanding of the amendments.

During the rally against the amendments on Sunday, at least seven people were arrested by police for various offenses, including damaging property and assaulting police officers.

In response to the public procession, the New People’s Party reiterated its support for the government’s proposal to improve Hong Kong’s extradition arrangements.

However, the party pledged that if the bill is passed, it would ask the government to submit regular reports to the Legislative Council on the latest implementation of relevant laws, and regarding whether each case is handled with adequate protection for human rights and freedoms as stipulated in the Basic Law.