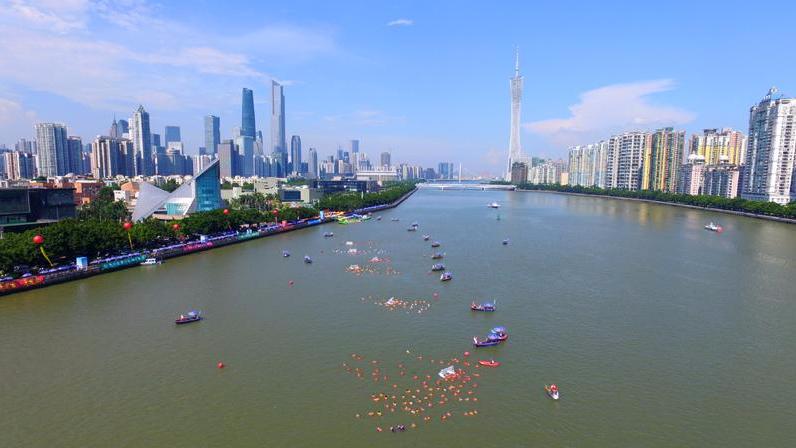 This file photo dated July 21, 2016 shows the Pearl River Delta in Guangzhou, where an event was held there catering to swimming enthusiasts. (Liang Xu / Xinhua)

The two decades that have passed since Hong Kong’s return to China have been marked by unprecedented closer economic integration and collaboration between Hong Kong and the Chinese mainland — cooperation that has accelerated under the framework of the Closer Economic Partnership Arrangement (CEPA) inked in mid-2003 following the deadly SARS outbreak.

As Hong Kong commemorates the 20th anniversary of its return to China, cross-boundary partnerships are set to scale new heights as two of the nation’s most ambitious economic projects take off — the intercontinental Belt and Road Initiative and the Guangdong-Hong Kong-Macao Greater Bay Area, which is geared to replicate the success stories of the world’s three leading bay areas — in New York, San Francisco and Tokyo.

Since Premier Li Keqiang outlined the bay area plan in his government work report to the Fifth Session of the 12th National People’s Congress in March this year, the 11 cities involved — Hong Kong, Macao and the Guangdong cities of Shenzhen, Guangzhou, Zhuhai, Dongguan, Huizhou, Foshan, Zhongshan, Jiangmen and Zhaoqing — have been working actively on how to blend themselves into the national strategy.

A formal blueprint is expected to be finalized by the National Development and Reform Commission by October this year.

Some of the mainland cities lie on the west bank of the Pearl River, where the transportation network is less developed than that of the east. Partly for that reason, their development has lagged behind with limited economic cooperation between those cities and Hong Kong.

The gross domestic product (GDP) of Zhaoqing, in western Guangdong, for instance, was only US$30.3 billion in 2015, according to official data, while Shenzhen’s GDP was almost nine times higher at US$269.5 billion.

For Jiangmen, which is also in the western region, its exports-and-imports trade with Hong Kong stood at 17.23 billion yuan (US$2.53 billion) in the first 10 months of last year, compared with Shenzhen’s 320.96 billion yuan reached in the first half of 2016 alone.

The bay area’s development is expected to mark a turning point as the cities will be better connected with improved infrastructure. 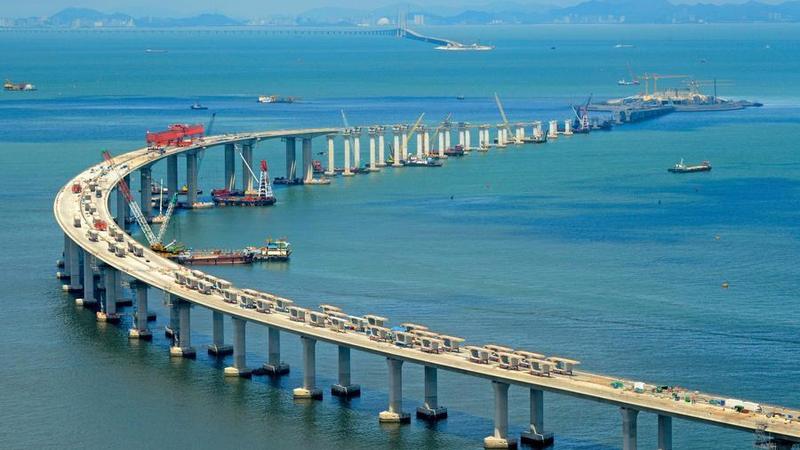 In this May 31, 2017 photo, the Hong Kong-Zhuhai-Macao Bridge is seen under construction. (Photo/Xinhua)

Another mega transport project — the 142-kilometer Guangzhou-Shenzhen-Hong Kong Express Rail Link — is scheduled to come into operation next year, enabling Hong Kong people to travel to Guangzhou in 48 minutes and to Foshan in 70 minutes.

Even for the farthest city of Zhaoqing, Hong Kong residents will be able to reach there in 1.5 hours via the high-speed railway network.

Up to 80 percent of the total number of Hong Kong people currently living and working in Guangdong, estimated at around 300,000, are in Guangzhou and Shenzhen. Improved infrastructure is expected to open up more opportunities and make it more convenient for them to work and live in other cities in the bay area, which have their own advantages and characteristics.

Foshan, which is near Guangzhou and has a permanent resident population of 7.5 million, was ranked third in GDP terms in Guangdong, and 15th nationwide last year, generating 860 billion yuan. The city is renowned for its manufacturing industry, such as home appliances, ceramics and textiles, and is striving to transform and upgrade itself into a high-tech city.

Zhongshan, with a GDP of 321.3 billion yuan last year, has an advanced textile and garment industry. The hometown of Sun Yat-sen, Zhongshan is also a popular tourist destination with a number of cultural attractions.

“The cities in the Greater Bay Area complement each other in various industries. That will bring more work opportunities for Hong Kong people. For instance, Foshan, Zhongshan and Dongguan are developed in manufacturing, but are relatively weak in the services industry, which Hong Kong excels in. In this respect, Hong Kong can play an active role,” said Guo Wanda, executive vice-president with Shenzhen-based think tank China Development Institute.

“Property prices in those cities are much lower than those of Guangzhou and Shenzhen, and Hong Kong people can build factories or buy properties there at lower costs.”

Guo added that, with intensified economic cooperation arising from the development of the bay area, Hong Kong people will also get more equal treatment in education, medical care and other aspects on the mainland. 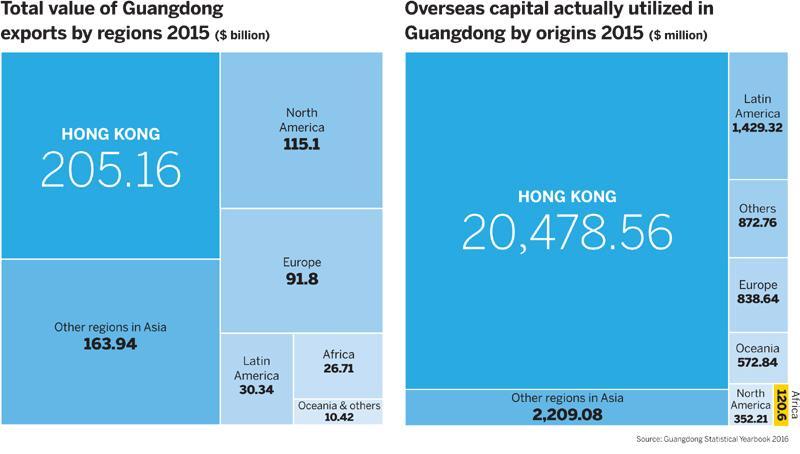 Mao Yanhua, deputy director of Sun Yat-sen University’s Institute for Free Trade Zone Research in Guangzhou, said the bay area enables Hong Kong to give full play to its advantages in the region.

However, Mao noted that the most important issue is to solve the problems arising from different systems between Hong Kong and the mainland, such as in taxation and legal matters.

The combined GDP of the 11 cities in the bay area reportedly amounted to US$1.3 trillion in 2015, which would make it the 11th-largest economy in the world if it were a country, according to a report by Cushman & Wakefield.

Compared with the other famous bay areas in the world, the Guangdong-Hong Kong-Macao Greater Bay Area’s total GDP is reportedly about two-thirds that of the Tokyo Bay Area, on par with that of the New York Bay Area and twice that of the San Francisco Bay Area, according to the report.

Dong Kai contributed to the story.