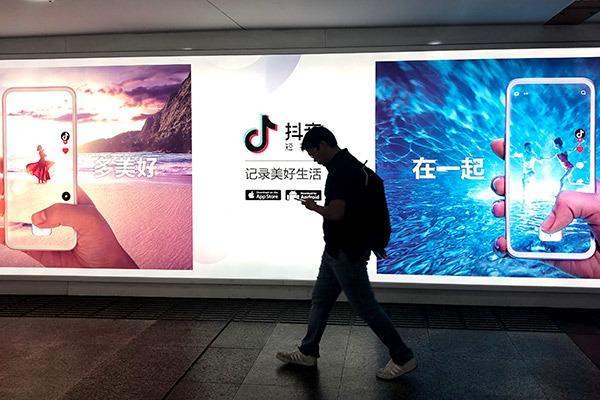 A man passes an advertisement for Douyin in Shanghai. (PHOTO PROVIDED TO CHINA DAILY)

China is stepping up regulations over the country’s popular short-video apps as it seeks to cap the amount of time children spend on their screens.

From June, all such apps will have to install a “youth mode” feature for parents that can limit what children watch and for how long, according to a note published on the website of the Cyberspace Administration of China. While the regulator didn’t specify a time limit, Douyin , which is known as TikTok internationally, and Kuaishou both said screen time could be as little as 40 minutes a day.

Short video apps have been a phenomenon in China as about 650 million people in the country watch them for everything from lip-syncing teenagers and silly stunts to crop reports. Tightening user activity could crimp advertising that has helped make Bytedance Ltd, the owner of TikTok, the world’s most valuable startup.

The special mode will include limits on contacts and services that kids can access, the regulator said, without giving details.

Once in “youth mode,” kids won’t be able to access the app between 10 pm to 6 am, Douyin said in its WeChat post. Other restrictions include not being able to live-stream to their followers, deposit money on the platform, or tip other users

Once in “youth mode,” kids won’t be able to access the app between 10 pm to 6 am, Douyin said in its WeChat post. Other restrictions include not being able to live-stream to their followers, deposit money on the platform, or tip other users.

A Bytedance spokeswoman referred to its WeChat post. Kuaishou, which was named by the regulators as participating in the program, did not immediately respond to a request for comment but posted a similar explanation on its WeChat account.

In its post, Kuaishou said “youth mode’ would be switched on automatically for users that its system determines are below a certain age. Bytedance said Douyin will also make the change automatically.

The success of the apps has invited increased government scrutiny. Last year, Bytedance founder Zhang Yiming issued a public apology after being reprimanded by the Chinese government for hosting vulgar content. He shut down a popular jokes app and vowed to add thousands of employees to an army of content moderators.

In January, the government cracked down on content posted on the apps with new regulations holding the companies responsible for all harmful content posted by users. “With the rapid growth of online short videos, conducting the anti-addiction work for teenagers has become a social responsibility that short video platforms must fulfill,” the regulator said.

Douyin, Kuaishou and another app called Huoshan participated in a trial started on Thursday.

In the US, Bytedance agreed in February to pay a record US$5.7 million fine to settle claims that one of its apps illegally collected personal information from children. As a result, it said TikTok would direct children under 13 to a similar “youth mode” that restricts content and user interaction.

Bytedance has shot up the rankings of the world’s startups thanks to the success of TikTok and its news aggregation app Toutiao. Last year, Bloomberg News reported the company was in the process of raising new funding from investors including SoftBank Group Corp at a valuation of US$75 billion, eclipsing Uber Technologies Inc as the world’s largest startup.