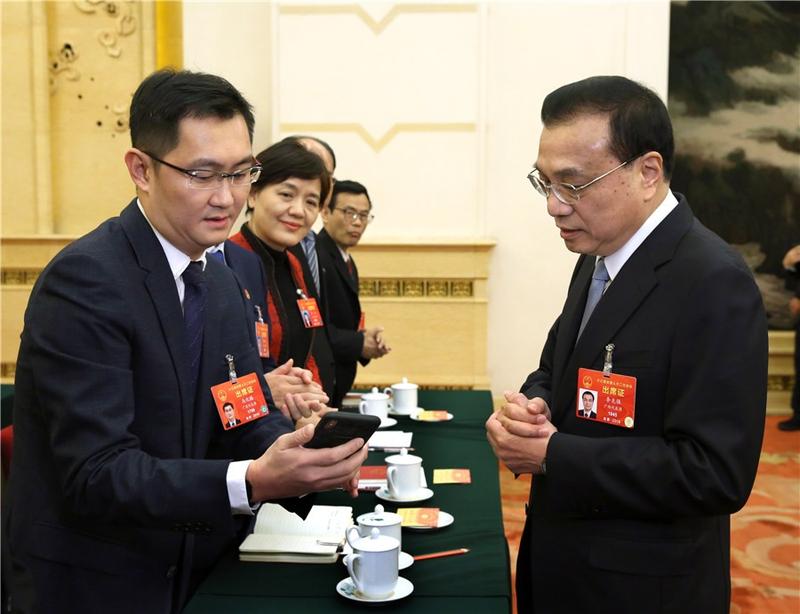 Premier Li Keqiang (right) learns about the latest development in online services from Pony Ma (first from left), chairman and CEO of Tencent and an NPC deputy, during a panel discussion at the ongoing NPC session, March 7, 2019. (WU ZHIYI / CHINA DAILY)

He joined a panel discussion in the morning with national lawmakers from Guangdong, which contributes about one-tenth of China's GDP.

Guangdong should also accelerate the transformation of old drivers into new ones to boost high-quality development and improve people's livelihoods, Li said

Praising the province's achievements last year, he said it should now work with the Hong Kong and Macao special administrative regions to develop the Guangdong-Hong Kong-Macao Greater Bay Area.

Guangdong should also accelerate the transformation of old drivers into new ones to boost high-quality development and improve people's livelihoods, Li said.

Last year, Guangdong signed an agreement with the German chemical giant BASF to establish a new chemical base in the coastal city of Zhanjiang. It also inked a deal with ExxonMobil of the United States to build a chemical plant. Both projects are expected to cost US$10 billion.

Zhang Shuofu, Party secretary of Guangzhou, said his city aims to build a modernized and internationalized business environment and is striving to become an innovation center for science and technology. The city will focus on new energy vehicles and biomedicines going forward, he said.

In the afternoon, Li joined a panel discussion with deputies from Qinghai province, known as China's "water tower". Qinghai made notable progress last year and should coordinate economic development with ecological protection, Li said. He called on the province to develop a green economy and firmly protect the country's water resources.

Local advantages should be used to develop industries that fit its conditions, the premier said. He urged officials to make further efforts in poverty alleviation, since Qinghai still has 77,000 people with incomes below the poverty line.

Last year, 176,000 people were lifted from poverty in Qinghai. The province aims to get the remainder out of poverty by the end of this year.

The premier also called for further integration of the internet with education and healthcare to improve locals' well-being.