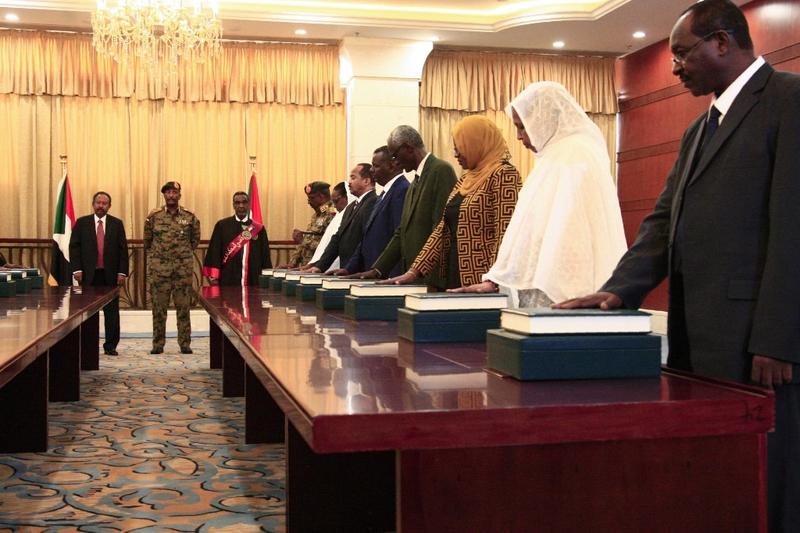 Members of the Sudanese cabinet take oath in the presence of the new Prime Minister Abdalla Hamdok (back- left) and General Abdel Fattah al-Burhan, the head of Sudan's ruling sovereign council (back-center) and acting chief of judiciary Babikir Abbas (back- right) at the presidential palace in the capital Khartoum, on Sept 8, 2019. (EBRAHIM HAMID / AFP)

Eighteen Cabinet ministers were sworn in before Sudan's top judge, Babaker Abbas, as well as PM Abdalla Hamdok and Gen Abdel-Fattah Burhan, the head of the sovereign council

The Cabinet is part of a power-sharing agreement between the military and pro-democracy demonstrators. The agreement was signed following pressure from the United States and its Arab allies, amid growing concerns the political crisis could ignite a civil war.

The new prime minister, Abdallah Hamdok, is still negotiating with the pro-democracy movement over the last two Cabinet posts.

The swearing-in took place Sunday before to country's top judge, as well as Hamdok and Gen Abdel-Fattah Burhan, the head of the sovereign council.

The new members include Sudan's first woman foreign minister, Asmaa Abdalla, along with three other women, in an apparent acknowledgement of Sudanese women's participation in the uprising.

The Cabinet is part of a power-sharing agreement between the military and pro-democracy demonstrators, which also includes a joint military-civilian sovereign council and a legislative body that is supposed to be formed within three months. The three bodies are to govern Sudan for little more than three years until elections can be held.

The agreement capped months of negotiations that were accompanied by a deadly crackdown by security forces.

Eighteen Cabinet ministers were sworn in before the country's top judge, Babaker Abbas, as well as Prime MInister Abdalla Hamdok and Gen Abdel-Fattah Burhan, the head of the sovereign council. Hamdok is still negotiating with the pro-democracy movement over the last two ministerial posts to complete his 20-member Cabinet.

Burhan headed a joint ceremonial meeting of the Cabinet and the sovereign council.

The culture and information minister, Faisal Saleh, said at a televised news conference after the meeting that both bodies "share responsibility for achieving the targets ... and the whole world is watching" their performance.

Finance Minister Ibrahim Elbadawi, who is a former World Bank economist, said the governing bodies would carry out "urgent measures" in the first 200 days to "restructure the budget, control prices and tackle youth unemployment."

The transitional administration faces towering challenges, including the dire economic conditions behind the start the protests late last year that eventually led the military to remove al-Bashir.

Al-Bashir, who rose to power in an Islamist-backed military coup in 1989, failed to keep the peace in religiously and ethnically diverse Sudan, losing three quarters of the country's oil wealth when the mainly animist and Christian south seceded in 2011 following a referendum. The loss of oil revenue plunged the economy into a protracted crisis that continues.

Sudan is nearly US$60 billion in debt. Hamdok said last month that Sudan needs up to US$8 billion in foreign aid in the next two years and an additional US$2 billion deposited as reserves to shore up the plunging local currency.

Achieving peace with armed groups is crucial for the government as it would allow a reduction in military spending, which takes up to 80% of the budget, the prime minister has said.

Sudan has been convulsed by rebellions in its far-flung provinces for decades, and while a rebel alliance has joined the pro-democracy coalition, it said last month that it should be represented in the transitional government.

The power-sharing deal calls for the government to reach a peace agreement with the rebels within six months.