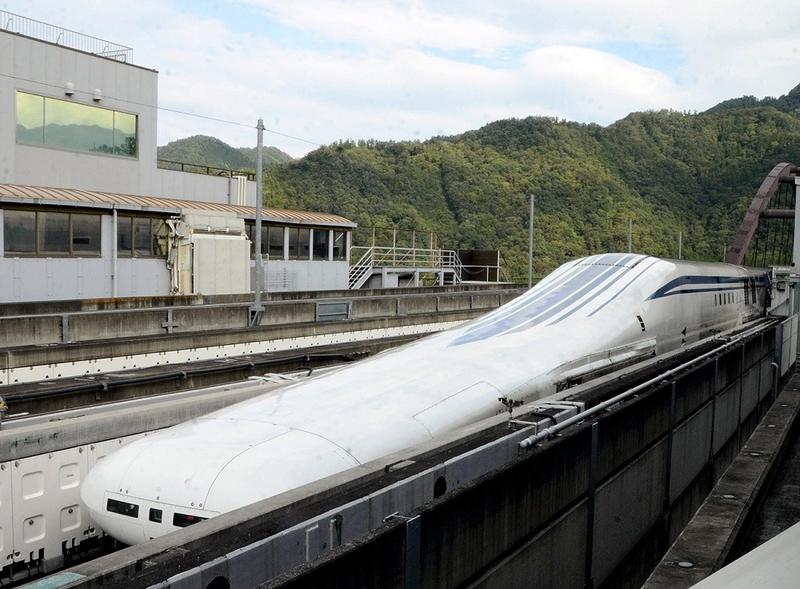 A test train on the linear Chuo Shinkansen line is seen in Yamanashi Prefecture, Japan, on Oct 3, 2019. (FILE PHOTO / THE JAPAN NEWS)

TOKYO – As the maglev Shinkansen train increased speed, the passengers started to feel slightly lifted up and pushed backward. The speed indicator on the train showed the rapidly increasing velocity, and it became hard to follow the streetscape outside the window with one’s eyes. Before long, the indicator reached “500 km/h.”

The gross domestic product of the commercial zones along the line is estimated at about ¥330 trillion (around US$3 trillion), or more than 60 percent of the nation’s total. Introducing the linear line will create a megalopolis of unprecedented scale anywhere in the world, where about 66 million people in Japan’s three largest conurbations would be connected within about one hour of travel time.

If a new way of life becomes established among young people, such as working at a regional home surrounded by nature and occasionally going to an urban office, it will contribute to creative work. We might see the birth of a ‘Linear Valley,’ resembling Silicon Valley. The linear Chuo Shinkansen line could trigger a new phenomenon like that.

The Tokaido Shinkansen line started its operation in October 1964, when the first Tokyo Olympic Games were held, and helped sustain the high economic growth of the time. It has been 55 years since then, and changes are again taking place in people’s mind-sets and in community development, envisioning the advancements that will result from the high-speed train services.

Early signs of the changes have been emerging in both urban and local areas.

“A one-hour cut in travel time will give us opportunities to think about new businesses and have more time for discussions. It will make a significant difference,” said Wataru Koga, 47, representative of Katsugekiza Inc. The company relocated its headquarters from Yokohama to Nagoya in August 2018.

The company’s main business is providing motion-capture acting, in which performers’ movements are recorded for digitization for video-game characters. Koga and other actors, wearing bodysuits with markers or sensors, perform fights and other scenes to provide data for creating game characters.

Their meetings with video game companies routinely involve thorough discussions to determine the details of game characters, such as the angles of body movements and facial expressions. To communicate subtle differences, Koga always prefers face-to-face discussions to teleconferences. Many of his clients, however, have their offices in and around Osaka, which requires him to travel more than two hours from Yokohama by Shinkansen to meet them.

He has been intrigued by the linear Chuo Shinkansen line, which is scheduled to begin operations in 2027. It will take only 40 minutes from Nagoya to Tokyo, and travel time to Osaka — the site of the terminal station when the line is extended — will also be dramatically shortened. With that in mind, Koga decided to move the company’s base to Nagoya, using a subsidy provided by the Nagoya city government for companies relocating to the city.

“The question of where the center of Japan is will likely not be asked in the future,” Koga said.

Shinagawa to be ‘gateway’ again

About a kilometer north from Tokyo’s Shinagawa Station, designated as the linear line’s railhead, a memorial tower for cows stands quietly on the premises of a temple. It’s there because the area used to bustle with deliverymen who used oxcarts to carry building materials used in the development of Edo, now Tokyo.

In the Edo period (1603-1867), Shinagawa became the first post town on the Tokaido route. The area had long prospered as a transport hub, also serving as a passageway for feudal lords’ processions.

“Shinagawa must have been Edo’s ‘gateway,’” said the deputy chief priest of the Ganshoji temple, which preserves the memorial tower. 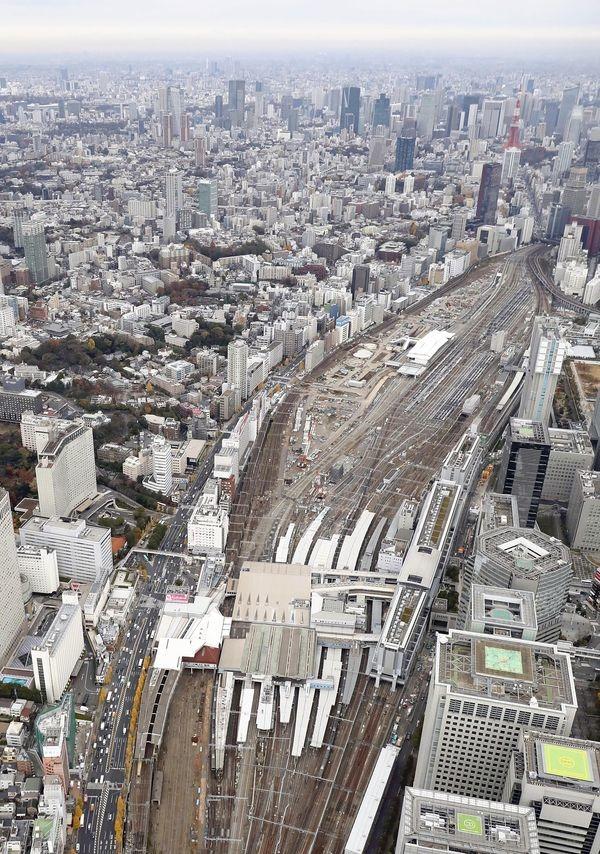 This aerial photo shows the area around JR Shinagawa Station, where large-scale development is underway, in Japan on Dec 13, 2019. (PHOTO / THE JAPAN NEWS)

More than 400 years later, Shinagawa is experiencing large-scale development projects with an eye on the linear line’s operation. This time, the area is expected to become a new gateway attracting people from both within and outside Japan.

On March 14, 2020, Takanawa Gateway Station will open on a former rail yard site near Shinagawa Station. By about 2024, four high-rise buildings will be built on a 7.2-hectare site of the yard, accommodating such facilities as a hotel, office spaces and an international conference hall.

“Shinagawa has not been as prominent as Tokyo Station, which is connected to the rest of the country by Shinkansen lines,” said a person in charge of the development at East Japan Railway Co. (JR East). However, “Shinagawa can grab the spotlight by taking advantage of serving as the starting station for the linear line and its proximity to Haneda Airport,” they said.

One of the stations on the linear line will be built in Iida, southern Nagano Prefecture. To reach Tokyo from there, it takes at least four hours by an express bus. The linear Chuo Shinkansen line will connect the city and Tokyo in 45 minutes, on par with the travel time to cities in the suburbs of the Tokyo metropolitan area.

In 2019, the Iida city government launched a project to provide up to ¥1 million to people relocating to the city from such places as the metropolitan area and the prefectures of Osaka and Aichi. The city government has dispatched officials to community events near the Shinagawa area, urging high-rise condominium residents and others to relocate.

The city government has already received inquires about the availability of good houses to move into.

“It’s a once-in-a-lifetime opportunity to revitalize the city,” a city official said. Similar efforts are also being made by the city of Nakatsugawa in Gifu Prefecture, where another station will be constructed.

Professor Hitoshi Ieda of the National Graduate Institute for Policy Studies, who chaired a government panel on regional development via the linear line, expects a new lifestyle will emerge.

“If a new way of life becomes established among young people, such as working at a regional home surrounded by nature and occasionally going to an urban office, it will contribute to creative work,” Ieda said. “We might see the birth of a ‘Linear Valley,’ resembling Silicon Valley. The linear Chuo Shinkansen line could trigger a new phenomenon like that.”