Syria says it agrees to cease-fire in rebel stronghold 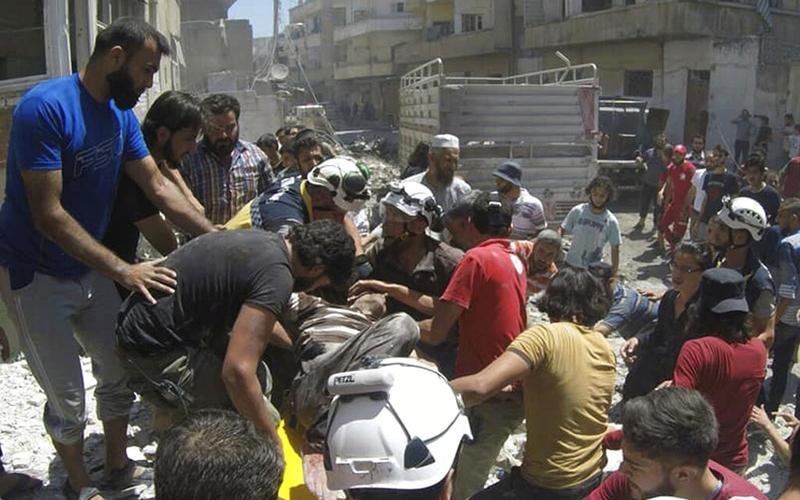 DAMASCUS — Syria's government said it has agreed to a conditional cease-fire starting late Thursday in northwestern Syria, according to state media. Government troops and allied Russia warplanes have been carrying out a three-month offensive against the rebel's last stronghold, which has displaced hundreds of thousands and has targeted health facilities and other infrastructure.

The decision came hours after UN Secretary-General Antonio Guterres authorized an investigation into attacks on health facilities and schools in the rebel-held enclave, following a petition from 10 members of the UN Security Council.

The offensive in Idlib and surrounding areas has unfolded since April 30, displacing more than 400,000 people and killing hundreds

The offensive in Idlib and surrounding areas has unfolded since April 30, displacing more than 400,000 people and killing hundreds. Images of attacks on health facilities and residential homes were reminiscent of the peak of the violence in the eight-year conflict. International rights groups, western countries and the UN had appealed for a cease-fire. Around 3 million people are living inside the rebel-held area.

A war monitoring group, the Syrian Observatory for Human Rights, said there was no sign of a cease-fire. It said intense clashes continued on the southern edge of the rebel stronghold.

The Syrian decision, announced in state media through an unnamed military official, said the cease-fire is conditional on the rebel's retreat 20 kilometers deep and away from demilitarized areas that ring the stronghold, which were agreed to in a cease-fire deal reached last September.

Idlib was supposed to be a de-escalation zone under the agreement signed between Russia, a key Syrian government ally, and Turkey, which backs the opposition. The rebel stronghold is dominated by al-Qaida-linked militants and other jihadi groups.

The Syrian military official didn't offer a timeline for applying the condition. Failure to implement the retreat and disarmament of militants was one of the reasons why the September cease-fire collapsed. At the time, the retreat was for up to 25 kilometers in some areas.

The government declaration comes as a new round of talks sponsored by Russia began Thursday in the Kazakh capital, attended by Iran and Turkey. The Syrian government and the opposition are also in attendance. The two-day talks were expected to focus on Idlib and plans to form a new constitutional committee.

On Thursday, UN spokesman Stephane Dujarric said Guterres was using his authority under the UN Charter to establish an internal board of inquiry to ascertain facts on the destruction and damage to civilian facilities in Idlib province on the so-called "de-confliction" list given to the warring parties to prevent attacks.

He said the probe will also include UN-supported facilities in the area.

UN humanitarian chief Mark Lowcock urged an end to the bombing and shelling in Idlib by Syrian and Russian warplanes, warning the Security Council Tuesday that continued violence could create the worst humanitarian disaster of the 21st century.

The decision came hours after UN Secretary-General Guterres authorized an investigation into attacks on health facilities and schools in the rebel-held enclave, following a petition from 10 members of the UN Security Council

The petition from 10 Security Council members was delivered to Guterres on Tuesday asking for an investigation into attacks on medical facilities and other sites on the "de-confliction" list.

Russia's deputy UN ambassador Dmitry Polyansky, whose country backs the Syrian government, told reporters Thursday that Moscow was "amazed" at Guterres' decision to establish an investigation, calling it "a mistake" and questioning whether the UN chief had the authority to take such action.

"We regret that there was pressure on the secretary-general from parts of the countries that really don't want to bring peace to Syria," Polyansky said. "It's a very decisive moment now in Syria. We are on the eve of the launch of constitutional committee, and of course there are a lot of forces that ... want to undermine any efforts for settlement. So we are afraid that this might be one of such attempts."Guterres stood by his decision, speaking to reporters shortly afterward.

"I fully respect the rights of the Russian Federation to disagree with me, as I also respect the position of 10 other members of the Security Council that have the opposite opinion," he said. "I believe that this inquiry can produce an important result, and I can guarantee that everything will be done to make sure that this board of inquiry acts with full objectivity, not to prove anything but to simply say what the truth is."Susannah Sirkin, policy director at Physicians for Human Rights, told the council during a meeting Tuesday on the humanitarian situation in Syria that, since President Bashar Assad launched the recent offensive, the organization had received reports of 46 attacks on health care facilities. So far, she said, it has verified 16 of them.

Humanitarian chief Lowcock said it was an "extremely important question" whether information provided through the de-confliction system was being used to protect civilian facilities — or to target them.

He told the council Tuesday that parties to the conflict have been notified of six different attacks in northwest Syria this year, and that "in the current environment de-confliction is not proving effective in helping to protect those who utilize the system."Lowcock said his team will meet with humanitarian organizations "to update them on the current situation and determine again whether we should continue to provide information to the parties on new sites or humanitarian movements."Opposition-based Syrian first responders known as White Helmets said Thursday that during the three-month offensive on Idlib, government forces and their allies had targeted 15 of the group's rescue centers and killed seven volunteers.

Raed Al-Saleh, the head of the White Helmets, said nowhere is safe inside the rebel-held area and that residents are experiencing "all types of death." Al-Saleh spoke via a social media broadcast from Idlib.

The White Helmets are the main group providing rescue services in the enclave. The Syrian government labels them terrorists.