High-tech devices domestically produced would save on costs 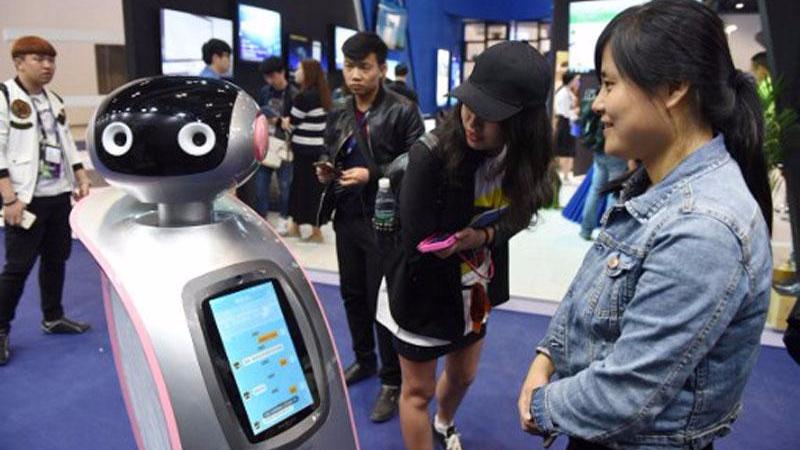 Visitors interact with a robot at the Global Mobile Internet Conference (GMIC) exhibition in Beijing on April 27, 2017. (Greg Baker / AFP)

China aims to break foreign dominance in the manufacture of core robot components in one to two years as the world's largest industrial robot market makes progress in producing reliable speed reducers, servomotors and control panels, one of the experts involved in drafting the Made in China 2025 strategy said.

The parts are the three basic building blocks of sophisticated automated machines and, if all are imported, they account for about 70 percent of a domestic robot's production cost.

"We aim to increase the market share of homegrown servomotors, speed reducers and control panels in China to over 30 percent by 2018 or 2019," said Qu Xianming, an expert with the National Manufacturing Strategy Advisory Committee, which advises the government on plans to upgrade the manufacturing sector.

By then, these indigenous components could be of high enough quality to be exported to foreign countries, Qu said in an exclusive interview with China Daily. He said once the target is met, it will lay down a strong foundation for Chinese parts makers to expand their presence.

Currently, most of these parts are imported from Japan, Europe and the United States, which has markedly increased domestic robot makers' production costs and weighed down their competition with foreign rivals.

"Domestic players have to spend four times as much as their foreign counterparts to buy speed reducers and twice as much for a servomotor," according to a white paper released in 2016 by China Center for Information Industry Development, a research agency affiliated with the Ministry of Industry and Information Technology.

China overtook Japan as the world's largest market for industrial robots in 2013. Last year, it installed 90,000 new industrial robots. That's one-third of the world total and 30 percent more than the year before, data from the International Federation of Robotics show.

The country plans to boost its annual production capacity of industrial robots to 100,000 in 2020 from 72,400 in 2016, signaling the growing demand for essential components.

"To mass-produce core robot parts is a flagship project of the Made in China 2025 strategy. Domestic players are making leaps forward," Qu said.

Shaanxi Qinchuan Machinery Development Co Ltd, for instance, can produce 10,000 units of cycloidal pinwheel speed reducers a year. Cycloidal speed reducers allow robots to move with greater accuracy. The company is building a factory that will have an annual output capacity of 60,000 units when completed by the end of 2018 at the earliest.

Nantong Zhenkang Machinery Co Ltd, another cycloidal speed reducer maker, is working on production lines that can make 50,000 units a year. "Once the two projects are completed, they can meet 30 to 40 percent of the domestic demand," Qu said.

Some Chinese players, including Siasun Robot and Automation, have independently developed control panels, which demand many tailor-made features, Qu said.

Wang Jiegao, chief engineer of Estun Automation and general manager of subsidiary Estun Robotics Co Ltd, said the company can produce over 100,000 servomotors a year, most of which go to high-end numerical control machines, so the supply to robots is still limited.

"It is highly likely for China to meet the 30 percent market share target, which can greatly lower the production costs," he said.

Rodney Brooks, founder and chairman of Rethink Robotics, said in an earlier interview with China Daily that the Chinese robot market is booming. The rising labor cost and shrinking labor pool will further drive the demand for industrial robots in the country.