Many older people who live with their children in unfamiliar places miss their hometowns and friends, as Wang Keju reports. 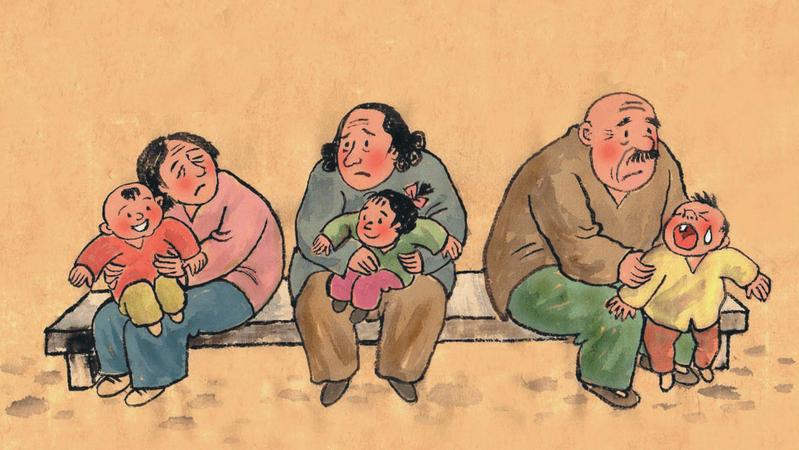 A growing number of elderly people are moving to China's larger cities to be with their married children and help look after grandchildren, but rather than finding a source of solace, many of these seniors, far from friends and familiar surroundings, feel lost, abandoned and isolated.

At 1:10 pm one Wednesday, 61-year-old Chen Lizhen waited for a free shuttle bus to arrive and take her to a supermarket about 15 minutes away. It was the third time that week she had visited the store and her fifteenth trip that month.

Two hours later, with just a bag of apples and some cucumbers in a shopping cart, Chen was still strolling around the store, unaware of how many times she had circled the fruit and vegetable section. With still an hour to go before it would be time for her grandson to leave kindergarten, she decided to stick around for a while longer.

I miss my old pals. I really hope I can go back and sing Huangmei Opera with them

Chen Lizhen, a senior in Beijing

At one time, she wasn't part of the furniture at a supermarket. Instead Chen, a huge fan of Huangmei Opera, was an amateur but active performer with a group of theatergoers. She was nicknamed "Little Ma Lan", after a famous female Huangmei Opera artist in her neighborhood in Huaining, a county in the eastern province of Anhui.

She hasn't sung for four years. Since coming to Beijing in 2013 when her daughter-in-law gave birth to a baby boy, Chen has become a 24-hour housekeeper, babysitting her grandson and taking care of her son and his family.

It's not a rewarding existence. "The idea of sneaking back to Huaining has occurred to me many times," she said.

Senior "migrants" such as Chen in cities such as Beijing and Shanghai can easily be spotted in their residential communities, at school gates or in supermarkets.

They left their hometowns to live with their grown-up children who work in the cities. Instead, in many cases, they simply have become childminders for the family's third generation, and even though they come from different parts of the country and speak different dialects, they share the same name: "senior drifters".

According to The Development of the Migrant Population, a report published by the National Health and Family Planning Commission last year, people aged 60 and older account for 7.2 percent of China's floating population of 247 million. That's about 18 million people, roughly twice the population of New York, and about 68 percent of these elderly migrants relocated voluntarily to live with their children or care for grandchildren.

Last year, there were 222 million people age 60 and older in China, according to the National Bureau of Statistics.

"The phenomenon of 'senior drifters' is closely related to the ever-growing number of migrants and ongoing urbanization. Just as young migrants struggle to get by in cities, seniors who move to the metropolises will encounter even more trouble," said Zhou Xiaozheng, a sociology professor at Renmin University of China in Beijing.

In Chen's case that "trouble" is the dilemma in which she has been caught since her 3-year-old grandson began kindergarten last year.

Now suddenly without company, she has no way of killing time. With few friends to chat with, let alone to sing Huangmei Opera, she is swamped by memories of the old days back home, combined with loneliness and depression.

"People back in Huaining envy me for living in Beijing, but I'm jealous that they can stay at home with old friends and relatives," she said.

Many seniors who have moved to large cities to live with their adult children say they are losing touch with old friends at home and being treated as unpaid babysitters or housekeepers. (PHOTO / XINHUA)

Moreover, caring for her grandson full time was like walking a tightrope every day. "I could not allow accidents to happen to him. My life was basically centered on him," she said, adding that cooking, feeding the baby, playing with him and lulling him to sleep left her little time for herself.

Jiang Xiangqun, deputy director of the Gerontics Research Center at Renmin University, said senior people have a strong attachment to their native places and long-term relationships.

"Being cut off from their familiar environment leads to a range of psychological problems, which many sons and daughters neglect," he said.

According to the Statistical Science Research Center of the National Bureau of Statistics in August, a lack of social activity results in about 25 percent of seniors feeling isolated, anxious and depressed.

Five years ago, Zhang Shuqin, left her home in the northeastern province of Heilongjiang and moved to Beijing to live with her daughter.

Unlike many of her senior drifter peers, Zhang came to the capital following retirement, and believing that the end of her working life signaled a new beginning. However, it still took time and effort to fit in.

When she first arrived in Beijing, she went to a restaurant for breakfast. She noticed that an elderly couple had ordered bowls of douzhir, or fermented mung bean milk. Assuming that douzhir was Beijing dialect for soybean milk, she ordered a bowl, too, but "the sour taste almost made me vomit". She quarreled with the owner and accused him of selling spoiled food. Later, she discovered that the drink is a Beijing specialty.

To avoid further embarrassment and blend in, the then-50-year-old began reading about the capital's customs and history, and visiting famous tourist spots.

Now, she talks about Beijing as though she has lived in the city for decades. "Even my neighbor, who is a real Beijinger, calls me a half-Beijinger," she said.

Despite her greater familiarity with the capital, Zhang still encounters obstacles every day, such as a lack of medical insurance.

The issue is not just a pressing problem at her age, but also a constant reminder of the gulf between her and native Beijingers.

To claim reimbursement of medical costs, senior drifters like Zhang have to travel hundreds or even thousands of kilometers to their hometowns and go through complicated procedures.

The reason is that the system is based on a person's hukou, or household registration, which means medical costs incurred away from home can only be reimbursed in the place where a patient's hukou is registered, usually their hometown.

In addition, treatment costs are higher in large cities, according to Zhang, who noted that the cost of treatment for a cold in Beijing is about 300 yuan (US$45), but less than 30 yuan in her hometown.

Although she can absorb costs of that nature, whenever she has had a more serious illness, Zhang has been forced to return to Heilongjiang to be reimbursed.

Every time she went home, she returned to Beijing with many local products, and a large bag of medication.

"People on the subway looked at me as though I was an illegal 'medicine dealer'," she said.

After a couple of periods in the hospital, she is for the first time considering going home for good. "I'm at an age when illnesses get in line to find me. I cannot place such a heavy burden on my daughter," she said.

Chen Biao, professor of geriatric science at Capital Medical University in Beijing, said time is catching up with many senior drifters.

"People aged 65 to 69 are at the lowest level of health. Therefore, once their health insurance is exhausted, the cost of treatment becomes an unbearable burden for their families," he said.

The medical needs of senior drifters directly influence their sense of belonging, and the government has long been pushing for cross-provincial medical fee settlements to provide greater convenience and help.

Last month, the Ministry of Human Resources and Social Security confirmed that the groundwork has been completed to build an "expressway" for the direct settlement of cross-provincial hospital expenses. That will allow senior drifters to apply for reimbursement of medical expenses without going home.

Confronted with these physical and psychological problems, many senior drifters are still wandering around large cities in desperation.

Chen's son and his wife have been discussing having a second baby. She was not happy when she heard the news.

"I miss my old pals. I really hope I can go back and sing Huangmei Opera with them," she said.