A breeding center in East China is helping to save the species from extinction, as Zhu Lixin reports from Xuancheng, Anhui. 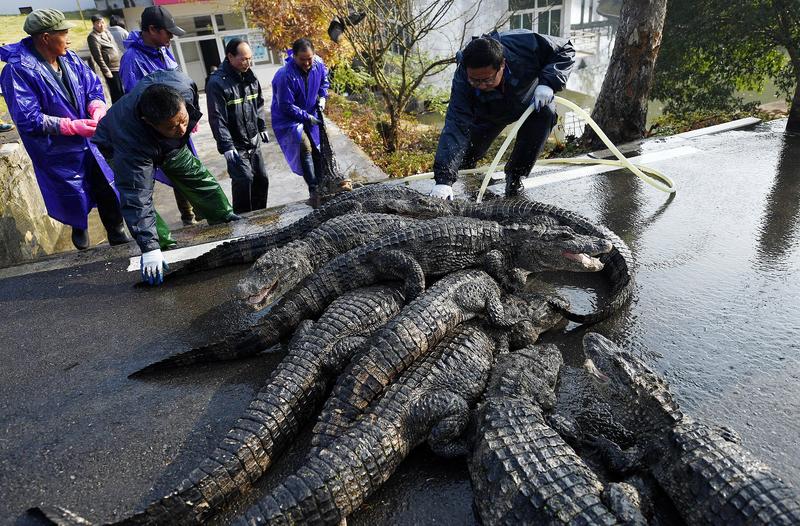 On November 27, about 10,000 Chinese alligators were moved from outdoor feeding pools to their winter home at the National Chinese Alligator Natural Reserve in Xuancheng, a city in the eastern province of Anhui.

The reptiles, a Class I protected species that is endemic to East China, are coldblooded, so their metabolism and activity slow during winter, making them easier to handle. The animals, which are also known as Yangtze alligators, will eventually hibernate until spring, when they will be taken back to the outdoor pools.

The reserve, which has been based in the suburbs of Xuancheng since the 1980s, is home to more than 15,000 Chinese alligators, including newly hatched reptiles. It is the world's largest breeding center for the species.

If the reserve didn’t exist, the alligators could have already disappeared from the face of the Earth

"There are many human-bred Chinese alligators, but in the wild they are on the verge of extinction. There are barely 300 individuals, including some that were born in captivity, but later released into natural surroundings," said Wang Renping, head of the center's information department.

Though the center has made a great contribution to preserving the species from extinction, challenges remain, and the International Union for Conservation of Nature has classified Chinese alligators as "critically endangered".

In November, four alligators bred at the center in Xuancheng were taken to Shizuoka, a city on Japan's Pacific coast.

They were the first to be sent overseas since 2006, when the practice was suspended because the center was in the process of changing its name and was therefore unable to obtain export certificates.

"To the best of our knowledge, the first Chinese alligators to be exported were sent to the United States in the 1950s," Wang said, adding that the reptiles were sent by the former Soviet Union because China and the US had not yet established diplomatic relations.

Sun Siqing, director of the industrialization office at the breeding research center, which is based in the national reserve, said: "Many zoos around the world are waiting for alligators bred at the center. Though the export of wild Chinese alligators is absolutely prohibited, exports of human-bred ones have been allowed since the 1980s."

Sun's department is responsible for large-scale breeding programs, the administration of tourism at the center, and exports, which are considered vital to helping the outside world learn more about the species.

In 1973, the International Union for Conservation of Nature added Chinese alligators to its Red List of Threatened Species. The animal's status as "critically endangered" means it faces an extremely high risk of extinction in the wild. 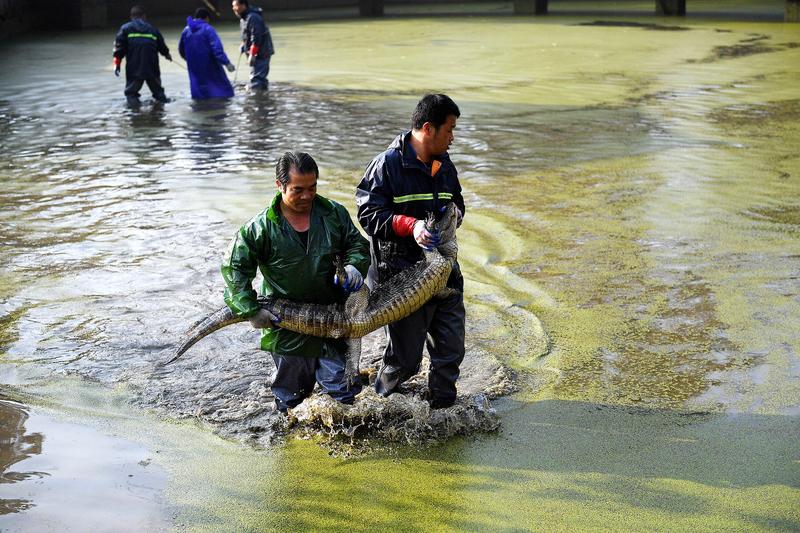 As the most comprehensive inventory of conservation status, the list provides scientific information about species and subspecies at a global level. It is also aimed at drawing attention to the magnitude and importance of threatened biodiversity, influencing national and international policies and decision-making, and providing information to guide actions to conserve biological diversity, according to the organization's website.

The breeding program in Anhui began in 1979, when the province's wildlife protection authorities captured 212 wild alligators and placed them under human supervision.

"The work was anything but easy; we had to learn how to feed them, to incubate the eggs, to feed the fragile newborn reptiles, help them live through the winter and assist them to produce offspring", said Wang, listing the difficulties the center had to overcome in the first 10 years.

The team's efforts didn't bear fruit until 1988, when human-bred alligators laid the first hatchable eggs, according to the 55-year-old, who has worked at the reserve since 1986 and was an alligator breeder until 2007.

In 2001, when an international seminar on alligator protection was held in Hefei, the capital of Anhui, it was decided that the reserve should release a number of alligators that had been bred in captivity to raise the number in the wild and provide better protection for the species.

So, in 2003, three alligators were released into the wild, quickly producing offspring.

"Although the trial was successful, the practice was opposed by some rural residents, who believed the animals would threaten their safety and that of their livestock," Wang said.

Usually, Chinese alligators, which are mild-mannered and rarely attack humans, attain an adult length of just 1.5 meters and weigh 30 to 40 kilograms. They are fully armored, even across the belly which has more bones and is harder than other crocodile species, making the animal less valuable to poachers.

In 1981, the forestry authorities in Anhui established a team of experts from China and the US to conduct a three-month investigation into the alligators' living conditions.

After the survey, the team estimated there could be as many as 300 to 500 alligators in the wild, and though they were mainly found in Anhui, small numbers were also located in the provinces of Jiangsu and Zhejiang.

"Nowadays, more than half of the human-bred alligators in China are in the reserve in Anhui, and most of the wild ones also live in the province. Only a few are found in neighboring Zhejiang," Wang said. In 1982, a 43,300-hectare provincial-level reserve was established to better protect the species, and was upgraded to national level the following year. A second study, conducted in 1985, showed that more than 400 wild reptiles lived in the reserve.

However, an inquiry launched by the reserve and the Wildlife Conservation Society in 1999 found that there were fewer than 145 alligators in the wild. In 2004, an investigation concluded that there were about 120 adult wild alligators in Anhui, Zhejiang and Jiangsu - although it proved impossible to determine the number of newly hatched reptiles - with the majority located in Anhui. Meanwhile, a 2005 investigation in Anhui estimated there were 92 to 114 adult wild alligators in the province, along with 66 immature individuals.

"We estimate that there are now about 300 in the wild, including some that were bred in captivity and later released," Wang said, adding that the reserve has freed more than 100 reptiles since 2003.

In some years, the reserve released about 10 alligators, but this year the number is just six. "It depends on our ability to adapt certain areas and make them suitable so the alligators can live free from human disruption," Wang said.

"If we free more than the areas can sustain, given factors including sources of food, such as fish in natural water, the alligators' situation could get worse."

In 2009, Anhui's economic development resulted in the reserve being reduced to 18,565 hectares, and it now mainly covers Xuancheng and the neighboring city of Wuhu. 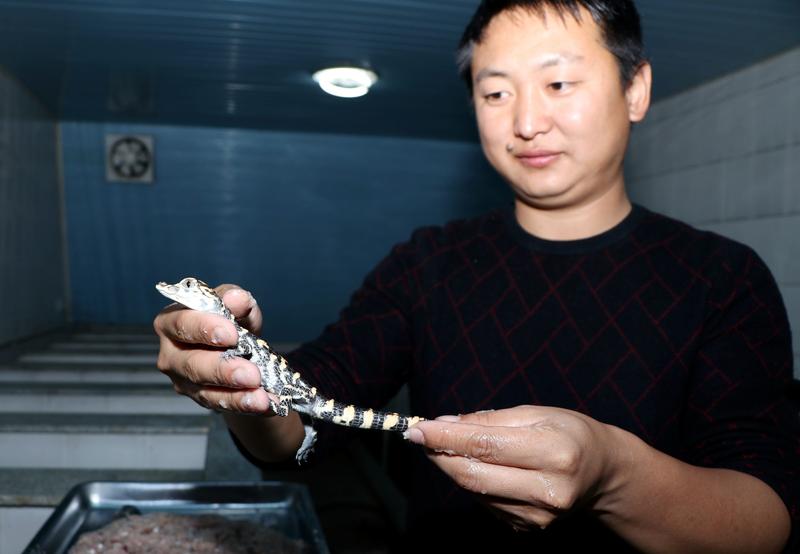 "Theoretically, a larger area would mean more alligators could find space in the wild, but on a practical level, it's very difficult. With a human population of 2.8 million in Xuancheng, it would be difficult to remove the residents and give the area over to the alligators," Wang said.

"There are still areas in the reserve that can be transformed to make room for wild alligators, but we need more time to make the adjustments."

According to the standard set by the International Union for Conservation of Nature, the Chinese alligator will be classified as a critically endangered species until the number in the wild reaches 2,500.

"That means we still have a long way to go. However, if the reserve didn't exist, the alligators could have already disappeared from the face of the Earth," Wang said.

Last year, three men in Wuhu, a city in the eastern province of Anhui, were given suspended prison sentences for killing a Chinese alligator.

The reptile was one of 92 farm-raised alligators which escaped when heavy floods hit the area in July 2016.

While officials and farm workers were attempting to capture the escaped reptiles, which are classified as an endangered species, the three men, surnamed Wei, Liu and Wang, discovered one on land near the farm.

Instead of reporting their find to the police, as required by an emergency notice released after the escape, the men bludgeoned the alligator to death and took the body to a restaurant.

Later, a friend filmed them butchering the animal and broadcast their actions live on social media.

Using video evidence, the police launched an investigation and the men were subsequently detained.

The reptiles are smaller and less aggressive than other species of alligator.

"There is a misunderstanding that all alligators are very dangerous", said Wang Renping, an official at the National Chinese Alligator Natural Reserve in Xuancheng, Anhui.

Though some Chinese alligators are raised on small farms, the owners are required to obtain the approval of the wildlife protection authorities - usually the forestry administration department of the local government - before they can start breeding the reptiles.

Killing the reptiles for food requires the approval of the local authorities, which permit a small number of them to be slain every year, according to Sun Siqing, an official with the industrialization office at the reserve, which is home to more than 15,000 Chinese alligators that were bred in captivity.