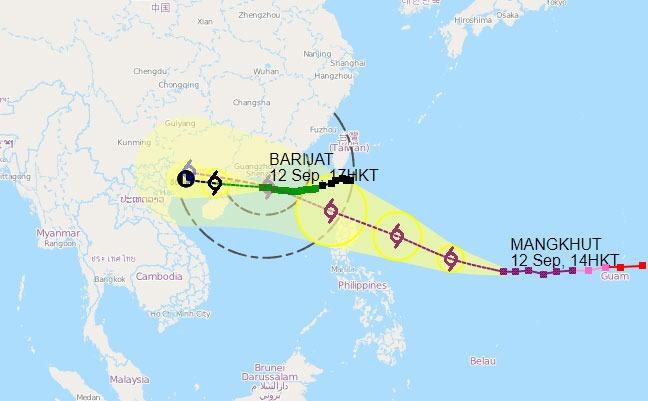 This screenshot taken from the official website of the Hong Kong Observatory shows the forecast tracks of Mangkhut and Barijat as of 5 pm, Sept 12, 2018 (HKT).

A super typhoon in the Pacific is gaining even more strength and is forecast to barrel through the Philippines and Taiwan this week before heading to the Hong Kong Special Administrative Region and south China.

The Philippines is anticipating that Mangkhut will be as strong as Haiyan, prompting the preparation of food, supplies and rescue as well as US$31.5 million in stand-by funds

The typhoon, expected to be closer to south China by the weekend, will bring heavy rains and storm surges on its trail. It can affect as many as 43.4 million people, according to the United Nation’s Global Disaster Alert and Coordination System.

Barijat to make landfall on mainland

Another tropical cyclone Barijat is also edging closer to Hong Kong, prompting the SAR's observatory to issue typhoon signal No. 3 around Wednesday noon.

Barijat, classified only as a tropical storm, was about 150 kilometers south of Hong Kong as of 5 pm Wednesday. It is forecasted to pack maximum winds of 65 kilometers per hour.

Barijat is forecasted to make landfall in an area between western Guangdong and eastern Hainan during the day on Thursday.

Passenger ship and train services between Guangdong and Hainan provinces in southern China will be halted.

Passenger ships across the Qiongzhou Strait, between Hainan and Guangdong, have been ordered to stop services as of 2 pm Wednesday due to safety concerns, said the local maritime safety administration.

Railway services circling the island of Hainan and across the Qiongzhou Strait are also to be suspended.

Over 70,000 fishermen and more than 23,000 boats have been called back to harbor as of Tuesday evening. 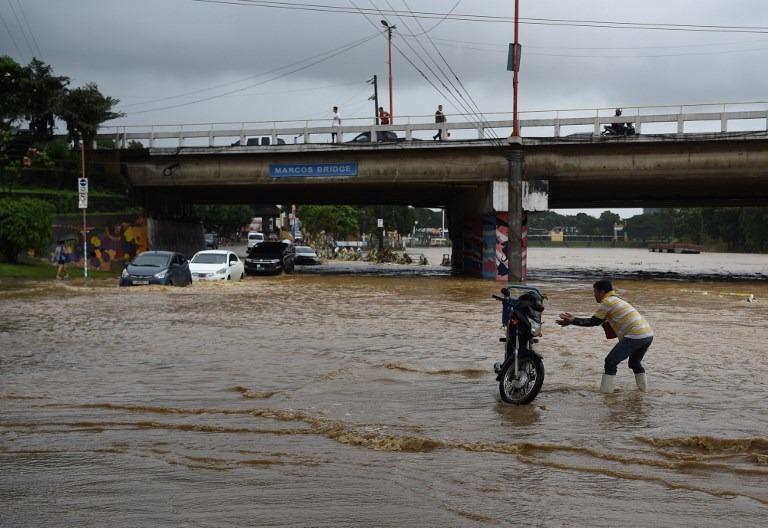 A motorist cleans his motorbike while vehicles maneuver a flooded street next to a swoolen river, causing flooding brought about by heavy downpour due to exiting tropical storm Yagi, submerged homes in Marikina city, suburban Manila on Aug 12, 2018. (TED ALJIBE / AFP)

Mangkhut is forecast to enter the Philippines on Wednesday just after another storm left. About 20 cyclones pass through the disaster-prone country each year. In 2013, Super Typhoon Haiyan killed more than 6,300 people in the Philippines.

The Philippines is anticipating that Mangkhut will be as strong as Haiyan, prompting the preparation of food, supplies and rescue as well as 1.7 billion pesos (US$31.5 million) in stand-by funds, according to the disaster agency.

The strongest typhoon to hit the Philippines this year is also threatening farmlands in Northern Luzon just before the rice and corn harvest. The staple grain is the second-biggest item in the Philippine consumer basket, and record prices boosted inflation to 6.4 percent in August, the fastest pace since 2009.

The storm may cause as much as 13.5 billion pesos in damage to crops, Agriculture Secretary Emmanuel Pinol wrote on his Facebook account Tuesday.

Mangkhut, to be named Ompong once it enters the Philippines, is now forecast by the US military’s Joint Typhoon Warning Center to bring top winds of 277 kilometers per hour with maximum gusts of 180 knots.

It’s expected to be 331.5 kilometers off Kaohsiung in southern Taiwan on Sept 15 before heading to Hong Kong, according to the US agency.