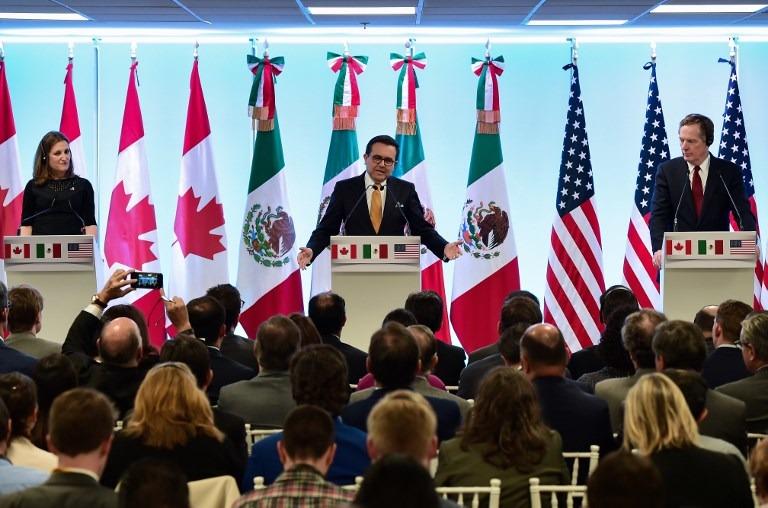 WASHINGTON - Talks to update the NAFTA trade deal enter a make-or-break week on Monday, as ministers from Canada, the United States and Mexico seek to resolve an impasse in key areas before elections in Mexico and the United States complicate the process.

Discussions in Washington will center on rules of origin that govern what percentage of a car needs to be built in the North American Free Trade Agreement region to avoid tariffs, the dispute-resolution mechanism and US demands for a sunset clause that could automatically kill the trade deal after five years.

US Trade Representative Robert Lighthizer warned last week that if the talks took too long, approval by the Republican-controlled Congress may be on "thin ice." The aim is to complete a vote during the "lame-duck" period before a new Congress is seated after November's congressional elections.

Mexico holds its presidential election on July 1 and the frontrunner, leftist Andres Manuel Lopez Obrador, says he wants a hand in redrafting NAFTA if he wins.

"We have a window of opportunity in the next two or three weeks ... considering two things: where the talks are now and the political calendars" in Mexico and the United States, said Moises Kalach, head of the international negotiating arm of Mexico's CCE business lobby, which is leading the private sector's involvement in the talks.

Sources close to the talks have suggested there is a creeping feeling of uncertainty and pessimism going into the new round because of gridlock on the most critical issues.

At the heart of the NAFTA revamp is US President Donald Trump's desire to retool rules for the automotive sector in order to try to bring jobs and investment back north from lower-cost Mexico. Despite months of talks on the issue, the sides remain far apart.

A round of talks among Canadian Foreign Minister Chrystia Freeland, Mexican Economy Minister Ildefonso Guajardo and Lighthizer scheduled for last week was canceled to allow consultations with the Mexican car industry and for the American to go on a trade mission to China.

Mexico's main auto sector lobby has described the latest US demands, which include raising the North American content to 75 percent from the current 62.5 percent over a period of four years for light vehicles, as "not acceptable."

"The positive momentum on the rules of origin appears to be counterbalanced by the opposite movement on labor wage treatment proposals," said Flavio Volpe, president of Canada's Automotive Parts Manufacturers Association.

The US proposal also would require that 40 percent of the value of light-duty passenger vehicles and 45 percent for pickup trucks be built in areas with wages of US$16 per hour or higher.

That is seen as a hard pill to swallow for Mexico, where the Ann Arbor, Michigan-based Center for Automotive Research has estimated auto assembly workers average under US$6 an hour, and auto parts plants workers average less than US$3 an hour.

Another contentious US proposal is to repatriate dispute resolution to the domestic legal system from international tribunals, which both Canada and Mexico oppose to, and so does US businesses

Critics also say it would create a bureaucratic nightmare of paperwork.

Talks to renegotiate NAFTA started last August to fulfill a campaign pledge by Trump to bring manufacturing jobs back to the United States.

Nine months later, the most contentious issues remain open. The United States has stuck with a proposed sunset clause for the new deal, which would mean the agreement would need to be renewed every five years, a move that critics say would create huge uncertainty for businesses.

Another contentious US proposal is to repatriate dispute resolution to the domestic legal system from international tribunals.

Both Canada and Mexico oppose that measure, and so does US businesses.

In a May 2 letter, the US Chamber of Commerce, American Petroleum Institute Business Roundtable and National Association of Manufacturers urged Trump and Lighthizer "to retain strong investment protections and investor-state dispute settlement in NAFTA."

Asked if an agreement was possible this week, a Mexican source close to the talks said: "The possibility is there, but it will depend on whether the United States is flexible."

Trump has frequently said he would pull out of NAFTA if a better deal was not possible, although he has sounded more positive about the deal in recent weeks.

It is unclear where the United States will give ground to win a quick deal. The Trump administration has embraced confrontational policies in its dealings on trade.