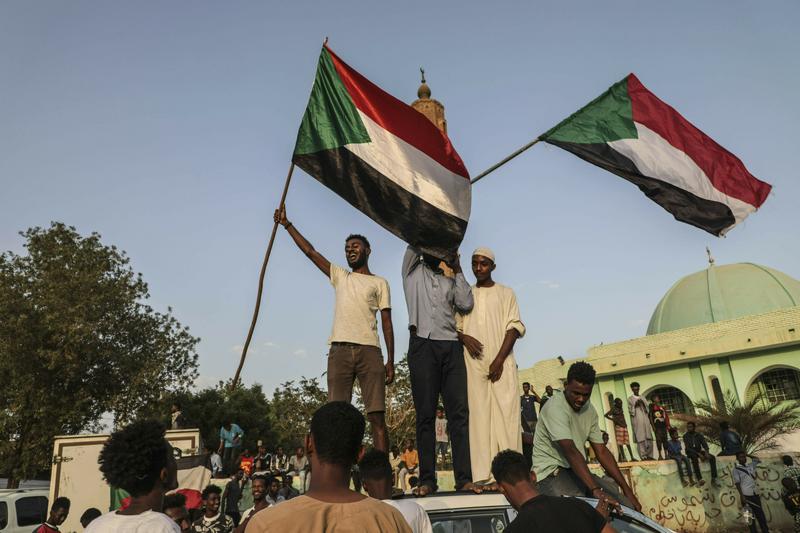 In this July 5, 2019 photo, Sudanese people celebrate in the streets of Khartoum after ruling generals and protest leaders announced they have reached an agreement on the disputed issue of a new governing body. (PHOTO / AP)

CAIRO — Sudan's ruling military and the pro-democracy movement on Wednesday signed a political document that's part of a power-sharing deal meant to end the country's deadlock after weeks of stalled talks.

Gen Mohammed Hamdan Dagalo, deputy head of the military council, hailed the signing as a "historic moment in Sudan" as representatives of both sides shook hands

The two sides — representatives from the military council and the Forces for Declaration of Freedom and Change — signed a so-called political declaration, one of two documents that are part of the deal, at a ceremony in Khartoum.

The other document, a constitutional declaration, is likely to be signed within days, perhaps as early as Friday.

The signing is a key step in Sudan's transition after months of street protests that prompted the military to oust autocratic ruler Omar al-Bashir and take over the country in April. But the protesters, though initially cheering al-Bashir's ouster, remained on the streets for several weeks, demanding the military hand over power to a civilian authority.

The military and the pro-democracy movement, which represents the protesters, had agreed earlier this month on a joint sovereign council that will rule Sudan for a little over three years while elections are organized.

The power-sharing deal, which also includes a Cabinet appointed by the pro-democracy movement, was meant to end weeks of deadlock between the two sides since a Khartoum protest sit-in was razed by security forces last month.

Protest organizers say security forces killed at least 128 people during that dispersal and subsequent crackdown. Authorities, however, put the death toll at 61, including three members of the security forces.

And on June 30, tens of thousands of demonstrators flooded the streets of Khartoum in the biggest show of numbers in the uprising. At least 11 people were killed in clashes with security forces, according to protest organizers.

The two sides subsequently resumed talks and also agreed on an independent Sudanese investigation into the deadly crackdown, though it is unclear if anyone will be held accountable.

"We are ushering in a new era," Ibrahim al-Amin, a negotiator for the protesters said at Wednesday's signing ceremony. "The upcoming government will be a government of all Sudanese, for all citizens ... we have suffered enough from the totalitarian dictatorial regime."

Gen Mohammed Hamdan Dagalo, deputy head of the military council, hailed the signing as a "historic moment in Sudan" as representatives of both sides shook hands.

Wednesday's development came after intensive efforts and pressure form regional and international powers. The African Union and Ethiopia led the diplomatic mediation, following the deadly break-up of the Khartoum protest camp in June.

Ethiopian mediator, Mohamoud Dirir, called it a "great moment for the people of Sudan" and lauded the "united front that represents the gallant army of the Sudan, the transitional military council, and of course the revolutionary youth, the intellectuals who have taken to the streets to stand for democracy."

AU envoy Mohammed el-Hassan Labat said the signing was "a decisive moment." Both Labat and Dirir, who attended the Khartoum ceremony, also shook hands and embraced.

The deposed strongman al-Bashir, who ruled Sudan for 30 years, has been under arrest in Khartoum since his ouster. He appeared in public in June for the first time since the military toppled him on April 11, as he was led to a prosecutor's office in a corruption investigation.

In May, al-Bashir was charged with involvement in killing protesters and incitement to kill protesters during the popular uprising that started in December, initially over price increases of basic goods and a failing economy, but which later turned into calls for his ouster.

He is also wanted by the International Criminal Court over charges of war crimes and genocide linked to the Darfur conflict in the 2000s, but the Sudanese military has said it would not extradite him to The Hague. He was the only sitting head of state for whom an international arrest warrant had been issued.