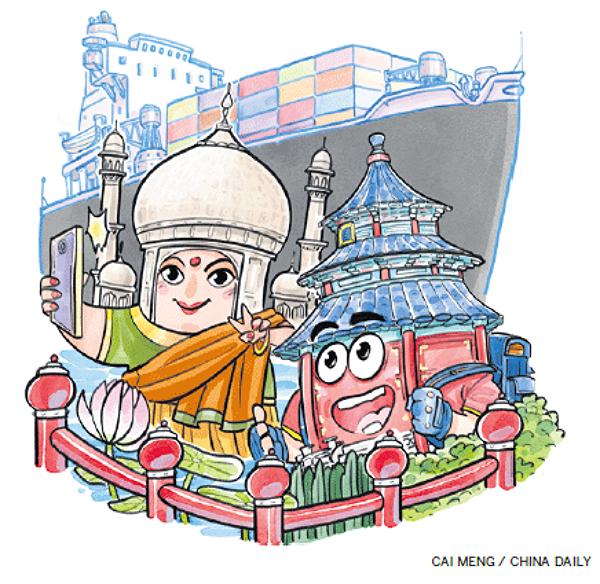 That China is a leading country in the world should not surprise anyone because since 1680, it had been the No 1 economy, till imperialism attacked it.

When Indians visit China, they say after their return: "Why can't India be like China?"

Before that, India was in the lead. India, too, suffered very severely from foreign invasions and imperialism. Such factors affected both China and India.

In the first few years after 1980, when modernization, reform and opening-up were introduced, the Gini Coefficient had gone up because higher incomes rose much faster than the middle incomes. (Gini Coefficient is defined as a measure of statistical dispersion intended to represent the income or wealth distribution of a nation's residents, and is the most commonly used measurement of inequality.) But by 2010, even it had come to decline.

China had accumulated huge foreign exchange reserves in US dollars, achieved a massive level of exports and a magnificent infrastructure. When Indians visit China, they say after their return: "Why can't India be like China?"

ALSO READ: China and India can fight poverty together

China's economic growth since the 1980s, which is visible in every corner of the country, is an amazing achievement indeed, and deserves an 'A+' for development, at least up to 2010. After 2010, the story changed a bit.

According to data from the International Monetary Fund, of which China is a member, GDP growth rate in 2010 was 10.63 percent. Then, it started declining. In 2018, it was 6.6 percent. In the first half of this year, it was at 6.3 percent.

The latest IMF forecast suggests China's GDP growth rate in 2024 will be 5.5 percent. Now, is this projection a cause for alarm? The answer is, it depends, because the old strategy of increasing growth has now outlived its purpose. China needs a new strategy now.

What is interesting is the incremental factor of the ratio. It was 4.62 in 2010, which climbed to 6.5 this year, suggesting the new policy lays emphasis on high efficiency in the use of capital.

A Renmin University of China study shows that the total factor productivity in growth of China's GDP was 4.3 in 2010, and then it declined to 3.6, which squares with the past inefficiency in the use of capital. Unemployment has also been declining - the rate was 4.5 in 2010, now it is 4.4. The Gini Coefficient was down to less than 38 in 2015.

The Chinese growth from 1980 onwards, especially after 1996, has been largely a story of more capital, more labor, suggesting longer-term focus, which is bound to bring diminishing returns. That's why, the GDP growth rate has been going down.

It is a correct strategy that China should now focus on innovation, which will take China from one curve to another, upward. That means, China can have higher growth rates for a longer time.

My new book Reset: Regaining India's Economic Legacy charts India's annual economic growth, which was 3.5 percent to 4 percent between 1950 and 1980, more or less the same as China's. But, after China introduced reform and opening-up, India's economic growth started accelerating.

But, in the past, adoption of a certain economic model did not yield the expected results. Comparisons clearly show a command economy, or a government-directed economy, does not run successfully to deliver high growth.

India suffered till 1991 when the Congress party-led coalition government headed by Narasimha Rao initiated major economic reforms, which increased growth from 3.5 percent to around 7 to 8 percent over the next five years.

Such high growth rates were sustained over the next several years. But after 2016, growth has decelerated. Now, it's down to around 5.5 percent. This had nothing to do with economic strategy but bad economic policies and questionable experiments that backfired badly. But India recovered, and high growth rate has returned.

Until recent decades, China's strategy has been what economists refer to as "switch trade". China imported semi-processed goods from East Asia, added value to them, and then exported them to Europe and the United States.

Data shows China had a negative balance of trade, or deficit, with East Asia. But it almost reached a surplus in trade with Europe and the US. That's how China made its progress and accumulated foreign exchange reserves.

The labor in East Asia had become quite expensive. So, it became cheaper for East Asia to send semi-processed goods to China. Now, countries like India and Bangladesh are competitors for China. So, China needs to rebalance its trade and change its foreign trade strategy.

China's labor is becoming expensive too, and more skilled. So, China needs to move away from setting up industries that basically service imports from East Asia. Instead, China should set up industries that are indigenous and can use innovation to produce new products. The country is already doing this quite well. China has beaten the US in 5G, and leads in artificial intelligence.

In the past, China went in for liberal financing. Infrastructure received money from banks that were supported by the government. But the private sector was not a big beneficiary. This needs to change now, and more financing should flow toward the private sector as well, to give impetus to innovation.

Lessons need to be learned from countries like Brazil and Argentina that were seen in the 1960s as economies that could become developed like the US and Europe, but were plagued by one crisis or another, and have not been able to realize their potential till now.

The experience of East Asia, which includes Japan, is also relevant. In 1995-96, the World Bank published a report called The Economic Miracle of East Asia, advising countries like India that were seeking growth to follow the basic principles of economic growth as pursued by East Asia.

But, in 1997, there was the Asian financial crisis. It was found later that the East Asian economic tigers were going to the market and giving short-term loans and investing in, or building up, long-term assets. The World Bank produced a sequel that reconsidered the "miracle". That should not happen to China.

The significance of the financial system cannot be overemphasized. One key aspect to note is that unlike the US and Europe, East Asian economies' financial system was not ready for the kind of high economic growth they witnessed.

Besides rising labor costs and outdated switch trade, China has to contend with high tariff walls that are being built around it, particularly by the US. China's infrastructure is nearing saturation point, and it's no more going to be the way to generate employment and higher skills. Even housing seems to be a bit saturated.

So, rebalancing of trade, combined with the Belt and Road Initiative, is going to be the key to future growth. China may want to consider giving higher rates of interest on savings and continue underlining innovation.

It is possible for China and India to learn lessons from their past that witnessed colonialism, imperialism, reparations for combat, monarchy. It is possible for the two nations to discover mutual areas of cooperation, particularly in research and development that can produce great value in the form of more innovation. One more area of cooperation could be mutual exchange of intellectuals.

This process has accelerated over the last four to five years. History is in cyclical mode. Two nations that were the world's economic leaders will regain lost glory. It's just a matter of time.

The writer is India's former commerce, industry and law minister; member of the ruling Bharatiya Janata Party; and member of the upper house of parliament. The article is adapted from his address to the international conference on China's 70 years as a republic, organized by Tsinghua University on Sept 22 in Beijing.