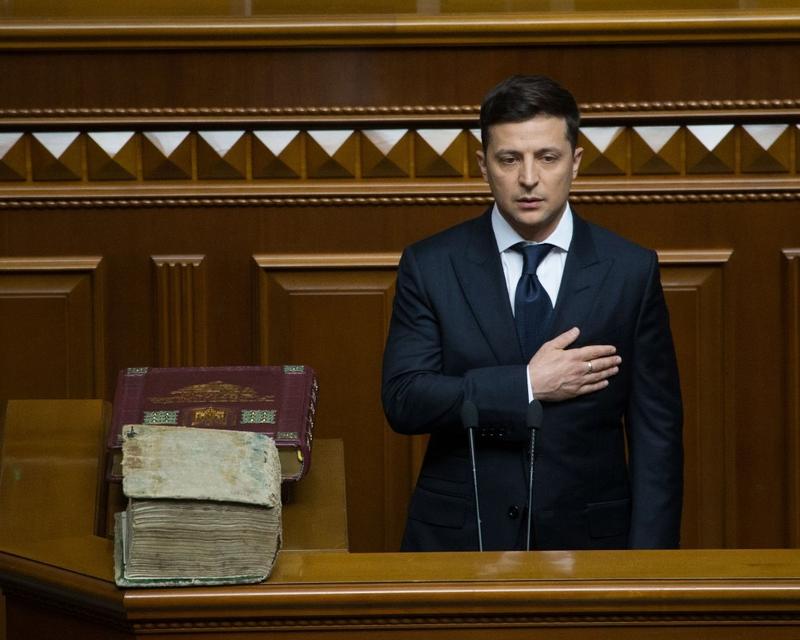 This photo taken and released by the presidential press-service on May 20, 2019 shows Ukraine's President Volodymyr Zelensky taking oaths during his inauguration ceremony at the parliament in Kiev. (MARKIV MYKHAILO / UKRAINIAN PRESIDENTIAL PRESS SERVICE / AFP)

KIEV — Ukrainian actor-turned-politician Volodymyr Zelensky on Monday took office as the sixth president of Ukraine, promising to bring peace to the country.

During the event, Zelensky, putting his right hand on the Ukrainian Constitution, vowed to defend the sovereignty and independence of his country and take care of Ukrainian people's welfare.

In his inaugural speech, Zelensky urged the current Ukrainian government to resign and announced that he is dissolving the parliament

After the solemn pledges, head of Ukraine's Central Electoral Commission Tetiana Slipachuk presented Zelensky with a certificate of his assumption of the presidential office.

Head of the Constitutional Court Natalia Shaptala handed over the symbols of presidential authority to Zelensky: the seal, the badge and the mace of the Ukrainian president.

In his inaugural speech, Zelensky said that his priority task on the presidential post is to put an end to the hostilities in the eastern region of Donbas.

Zelensky also urged the current Ukrainian government to resign and announced that he is dissolving the parliament.

The official inauguration ceremony took place in the Ukrainian parliament, attended by dozens of foreign dignitaries. Chinese Ambassador to Ukraine Du Wei headed the Chinese delegation to the event.

The 41-year-old Zelensky who gained more than 73 percent of the vote was elected as the president of Ukraine on April 21 for a five-year term.