An airport staff checks the travel documents of passengers before they are allowed to enter the passenger terminal building of Hong Kong International Airport, Aug 14, 2019. The airport has obtained an interim injunction to stop people from obstructing operations at the airport. (PHOTO / CHINA DAILY)

HONG KONG - Calm returned to the Hong Kong International Airport on Wednesday after the Airport Authority enforced an interim injunction from the High Court to stop people from obstructing operations at the airport. It is expected to take some time to clear all the traffic backlogs accumulated in the past two days

The airport resumed operations on Wednesday, rescheduling hundreds of flights that had been disrupted over the past two days as protesters clashed with riot police.

Starting 2 pm Wednesday, HKIA required all passengers to show their identity documents and flight information before entering the airport. Copies of the interim injunction order with official seal affixed were put up near the entrance to the airport around 2:30 pm.

The order to ban unlawful obstruction of airport operations was granted by the High Court on Wednesday morning upon a plea filed by the Airport Authority and will remain in force up to and including Aug 23, 2019.

Starting 2 pm Wednesday, HKIA required all passengers to show their identity documents and flight information before entering the airport. The injunction will remain in force up to Aug 23, 2019

The injunction order prohibits any person from unlawfully and willfully obstructing and interfering with proper use of the airport.

As a short-term measure, the Hong Kong International Airport would ban any demonstration in its terminal buildings after the facility was paralyzed by mass anti-government protests for two days.

Fred Lam Tin-fuk, chief executive officer of the Airport Authority, made the remarks at the government’s inter-departmental press conference on Tuesday, hours after an injunction order issued by the court took effect at the airport from 2pm.

“The priority of the Airport Authority is to ensure a smooth operation of the airport and security of passengers and staff members,” Lam said.

In past two days, a total of 979 flights were canceled, Lam said, adding the entire aviation industry would be seriously brought down if the situation was allowed to continue.

Both Lam and the Secretary for Transport and Housing Frank Chan Fan condemned the protesters’ violent acts at the airport.

Chan stressed the violent acts have already gone beyond the bottom line of a peaceful assembly, adding that violence posed security threats on the public, including passengers and protesters.

The society must say no to violence, Chan said.

According to the SAR’s law, any acts of any person which constitute an obstruction of a bailiff's enforcement of an injunction order may be liable to the offense of criminal contempt of court, and that the police have been authorized by the court, where necessary, to arrest those who obstruct the bailiffs in their execution of duties.

A few dozen protesters were still camped out in the terminals’ public areas Wednesday morning, with most having cleared out before the trains back to the city centers stopped running. Most banners were gone. Workers scrubbed it clean of blood and debris from overnight.

Check-in counters reopened shortly after 6 am to queues of hundreds of weary travellers who had waited overnight for their flights.

The Hong Kong Special Administrative Region (HKSAR) government severely condemned violence at HKIA on Tuesday night, saying such acts were“outrageous and had overstepped the bottom line of a civilized society”. In a statement issued around 3 am Wednesday, the government vowed to take relentless enforcement action to bring the perpetrators to justice.

In a statement released around an hour later, police condemned violent acts by protesters overnight and said on Wednesday a large group had "harassed and assaulted a visitor and a journalist".

Five men aged between 17 and 28 were detained, police said, bringing the number of people arrested since the protests began in June to more than 600.

Swire Pacific said that rule of law is the cornerstone of Hong Kong's flourishing economy and people's peaceful life, so "We must act now to stop the violence and preserve stability, peace and prosperity of Hong Kong."

ALSO READ: Violence is pushing HK into 'abyss of destruction'

Also on Wednesday, a spokesperson for the Hong Kong and Macao Affairs Office of the State Council voiced strong indignation and condemned over the assault of a mainland reporter and a mainland traveler by a mob at the airport Tuesday night.

Protesters accused one man of being an undercover police officer from the mainland. But the editor-in-chief of the Chinese and English editions of the Global Times said he’s a reporter for the paper. “He has no other task except for reporting,” Hu Xijin said in a tweet.

The reporter, named Fu Guohao, was tied up and beaten by protesters and was evacuated by paramedics around 12.30 am. He appeared conscious as he was carried away on a stretcher.

He was later discharged from the hospital on Wednesday. 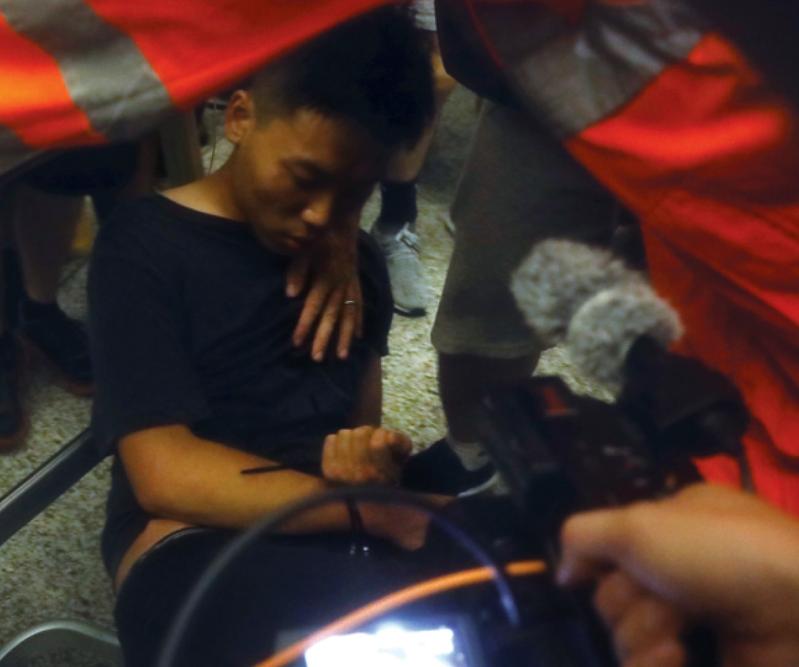 A man accused by rioters of being an undercover police officer appears to be unconscious after being beaten up and denied access to medical attention at Hong Kong International Airport in the night on Aug 13, 2019. (PHOTO / CHINA DAILY)

A couple of hours earlier before Fu was assaulted, protesters beat and tied up a man they said was a mainland police officer who was pretending to be one of them. They prevented paramedics for hours from evacuating the man while shouting “You’ll bear the consequences for your own actions.”

As medics carrying the man on a stretcher pushed their way through crowds to an ambulance waiting outside, scuffles broke out between remaining police and protesters. Most of the protesters left after officers armed with pepper spray and swinging batons tried to enter the terminal, fighting with demonstrators who barricaded entrances with luggage carts. Riot police clashed briefly with the demonstrators.
A police officer was assaulted and his baton was snatched. In order to protect himself from threats to life or serious injury, the officer withdrew a pistol and stayed on guard.

A woman surname Chan, who said she was a retail store assistant at the airport, told China Daily that her business had not recovered because there were fewer tourists in the airport than before despite the appearance of a relatively normal day for the airport.

The shop barely had any income yesterday and the day before, because it was closed most of the day, she added.

Most of the shops in the airport closed at around 3 pm Tuesday when protesters marched to the restricted area and prevented passengers from boarding.

In spite of substantial losses, Chan said she understood that the police didn’t show up at the airport last two days because the demonstrators were likely to turn aggressive, and sure enough they did.

A tour guide from South Korea, who requested anonymity, said 12 tourists in his tour group had been stranded in Hong Kong for a day. The guide, who has been working in Hong Kong for more than 20 years, said to his knowledge that this is the first time the airport was shut down due to factors other than natural disasters.

A copy of the interim injunction obtained from the High Court by the Hong Kong Airport Authority to stop people from obstructing operations of the Hong Kong International Airport is posted near the airport entrance, Aug 14, 2019.  (PHOTO / CHINA DAILY)

He said his income was affected because a large number of tour groups had been canceled in recent months. He was worried that the incident would harm Hong Kong's image as a tourist destination. But he believed that Hong Kong remained a safe city and that the unrest was only temporary.

Li Lei, a 30-year-old traveler from Chengdu who was taking a transfer flight in Hong Kong to Maldives, said he slept at the airport last night as his flight was canceled. "I was angry and worried," he said. "But Hong Kong belongs to China. Chinese people shall not be afraid standing on Chinese soil."

Pieta Sparrow, an 18-year-old Australian student in her gap year, said she was stuck at the airport overnight. She felt sorry for those who were also affected, especially those who are traveling alone or with children. She hoped the disturbance would come to an end soon.