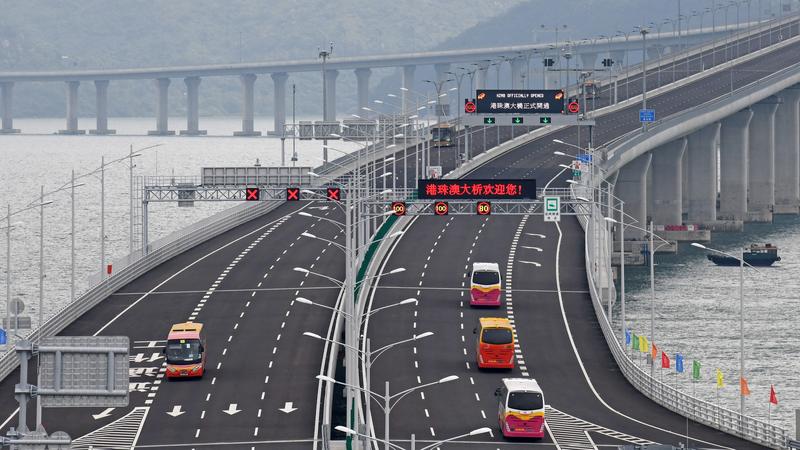 Hong Kong — At 6:50 am on each school day, a bus full of children in various school uniforms enters the departure lane of a gigantic bridge rising sheer out of the water in Zhuhai, south China's Guangdong Province. In about 45 minutes, it covers a distance of dozens of kilometers, carrying the students to their schools on the other side of the sea.

The girl lives with her parents in Xiangzhou District, Zhuhai and studies at HKFEW Wong Cho Bau School in Hong Kong. Before 8:00 am, she already sits in the classroom with her friends.

The Y-shaped gigantic project, spanning over the Lingding Channel in south China for 55 km, connects the mainland province of Guangdong with the country's two special administrative regions, Hong Kong and Macao. The construction consisting of a series of bridges, artificial islands and a tunnel facilitates travel that used to be separated by channels.

Thanks to the bridge, drivers traveling among the three places need no more detours. The trip from Hong Kong to the other two was cut from 200 km to 65km and from three and a half hours to merely 45 minutes

Thanks to the bridge, drivers traveling among the three places need no more detours. The trip from Hong Kong to the other two was cut from 200km to 65km and from three and a half hours to merely 45 minutes.

"It is like an extension of our home and I even feel that we live in the same city," Ella's father said.

Just like Ella's family, numerous people living in the region have enjoyed the convenience. The bulk of travelers using the bridge are tourists, with the rest commuting for work and school.

Michael Yau, a public affairs commentator in Hong Kong, was a frequent traveler.

Having traveled to Zhuhai and Macao by bus for multiple times during the past year, Yau said trips became convenient due to the bridge. "People can easily pass through port of entry and enjoy sufficient bus services between the port and downtown."

The bridge celebrated its first anniversary on Thursday.

Trips made by travelers entering and leaving Hong Kong through the bridge have surpassed 20 million for the past 12 months. Daily trips currently average 50,000 on common days, and once topped 160,000 during the Spring Festival travel peak.

The traffic movements of vehicles have neared 1.54 million. About 1,000 cargo trucks and 4,000 passenger vehicles run across the bridge every day. Cross-border shuttle bus served every 5 minutes in rush hours.

"I did not anticipate the traffic could increase in such a rapid pace during the past year, and that is the biggest surprise for me," Zhang Xu, an engineer of Highways Department of the Hong Kong Special Administrative Region (HKSAR) said.

With the swifter journeys enabled by it, cities that formed the economic belt of the Guangdong-Hong Kong-Macao Greater Bay Area are more closely connected. 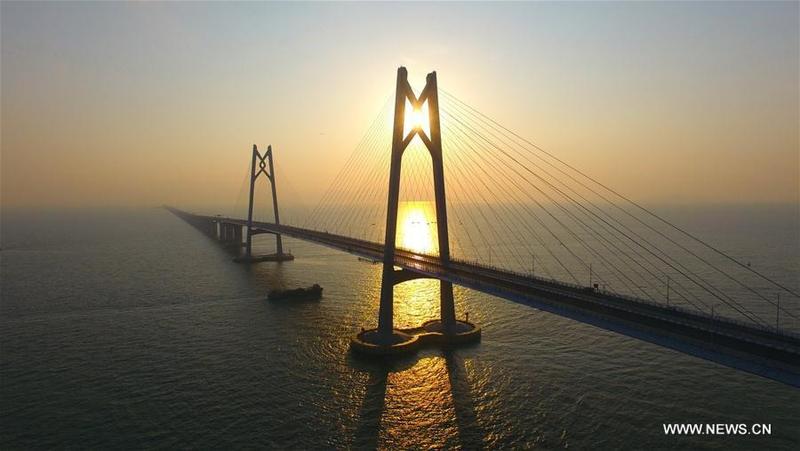 This file photo taken on Dec 27, 2017 shows the bridge towers of the Hong Kong-Zhuhai-Macao Bridge at dawn. (PHOTO / XINHUA)

Analysts said the Greater Bay Area with a population of 66 million people, 56,000 square km of coverage and a total GDP equivalent of US$1.3 trillion is getting a boost.

Antonio Hunter Chan, vice president of Hong Kong China Chamber of Commerce described the bridge as a "golden channel" as it further improved the infrastructure of the Greater Bay Area.

"Since the opening of the bridge a year ago, the Greater Bay Area has become more integrated and showed stronger synergistic effect, with smooth logistics networks and free flow of high-level talents," Chan said.

Echoing Chan's remarks, Hong Kong-based economist Liang Haiming also pointed out that the bridge not only facilitates people-to-people exchanges in the three places but will bring social and economic benefits.

The regions linked by the bridge boast world-class universities, leading research institutes and international talent in trade and finance, and can strengthen cooperation to foster and attract more talent and build the area into a technology and innovation center, Liang said

As the landmark project in one of the most dynamic economic areas in China, the bridge is expected to play an even bigger role in deepening ties between Hong Kong and the mainland and create mutual benefits.

"So far we have not used the bridge to its fullest potential," said Leung Chun-Ying, vice chairman of the National Committee of the Chinese People's Political Consultative Conference and former chief executive of the HKSAR.

Leung said the quota for Hong Kong private vehicles to use the bridge was not enough and called for more, so that "young Hong Kong people and others would roam free behind wheels to see Guangdong for themselves."

"The first year for the bridge was a year of adaptation and integration, and in the future the transport hub will become a magnet to attract more resources in the Greater Bay Area and become a stronger growth driver for the region," said Fang Zhou, research director of the One Country Two Systems Research Institute.