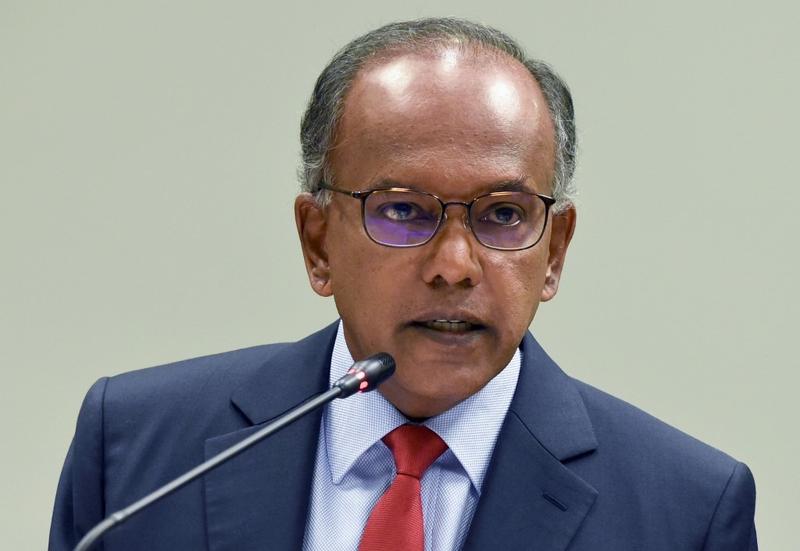 Singapore's Minister of Law K Shanmugam speaks during a press conference along with deputy speaker of the parliament and chairman of the Select Committee on Deliberate Online Falsehoods, in Singapore on Sept 20, 2018. (ROSLAN RAHMAN / AFP)

Singapore’s Minister of Law and Home Affairs doesn’t believe the island city-state stands to benefit from any instability in Hong Kong, as protests stretch into a third month.

We are different from Hong Kong because we don’t have the same advantages that Hong Kong has. Hong Kong can weather it. Singapore may not be able to weather it.

The rival financial centers are widely seen as investor-friendly havens from which to tap into fast-growing Asian markets.

Singapore benefits from stability across the Asia-Pacific region, including in Hong Kong and the mainland, he said. “There’s no profit in seeing instability,” K Shanmugam said in an interview with the South China Morning Post, according to a transcript published on the Ministry of Law’s website.

Long competitors for foreign investment, the economic outlooks for both Hong Kong and Singapore have dimmed in tandem amid an ongoing trade war between the US and China, with Hong Kong additionally buffered by the continued unrest. Hong Kong Financial Secretary Paul Chan warned the Asian financial hub is entering “a very difficult economic environment” as trade declines and growth slows.

Meanwhile in Singapore, Prime Minister Lee Hsien Loong in his National Day address August 8 said the government would be willing to stimulate the economy if necessary amid a trade-induced slowdown.

Shanmugam said it would take a lot more than the current protests to make serious investors leave Hong Kong.

“Unless people become pessimistic about China, I don’t see immediate calculations being made by serious investors,” he said. “People with easy ability to transfer money, may do different things. But I think other serious investors understand Hong Kong’s position.”

Beijing's ultimate support of Hong Kong will help the city weather the situation, Shanmugam said, an advantage that Singapore doesn’t have.