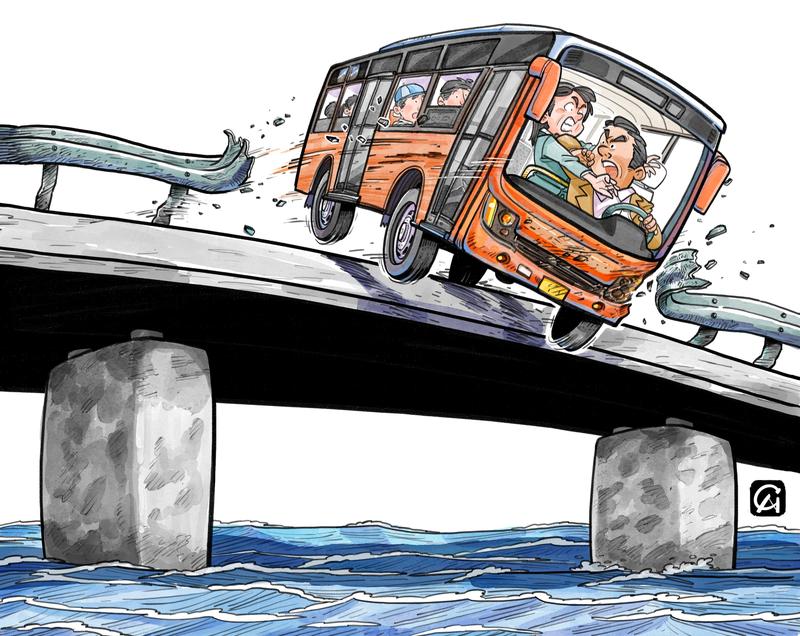 Experts and industry insiders are working on ways to better protect transit workers after 13 people died when a bus driver was attacked by a passenger and his vehicle plunged from a bridge into the Yangtze River in Chongqing last month.

Two people are still missing after the bus smashed through a guard rail on the bridge.

Footage from the vehicle shows the driver being hit on the head by a female passenger who had missed her stop and was refused permission to get off. The driver retaliated with one hand, but lost control of the bus.

Chen Yuefeng, an associate professor of transportation law at East China University of Political Science and Law in Shanghai, said such accidents could be avoided by using simple but effective measures such as installing a partition to separate drivers from passengers.

"Both airplanes and trains have cabins, but I rarely see cabins on buses. It is now time for the government and companies to consider providing them, along with protective doors, for drivers," he said.

Since 2013, the Judgments Online website of the Supreme People's Court has recorded more than 67 criminal cases in which passengers were accused of endangering public safety by attacking bus drivers. Most of the defendants were sent to prison for more than three years.

These incidents all involved fighting between passengers and bus drivers and led to traffic accidents.

In 2015, in Longnan, Gansu province, a bus driver was attacked by a passenger, and lost control of the vehicle, which mounted a sidewalk. One pedestrian was killed and two others were injured.

Beijing is playing a leading role in upgrading its buses.

Li Qingyuan, deputy head of the security department at Beijing Public Transport Group, said drivers' partitions had been phased in since 2011, and installation work had been completed on 70 percent of the 26,363 buses in the city. The remainder will be upgraded in the next few years.

"Beijing is the country's political center. Terrorists and other extremists have posed threats on buses, so bus drivers in the city are vulnerable and need more protection.

"The municipal government has invested a lot of money on buying new buses fitted with safety partitions, which ensure that passengers are unable to commit any acts of violence, Li said.

In June, the Bus Operator and Pedestrian Protection Act was introduced in the United States. The act requires transportation agencies to install barriers for drivers and to report the number of incidents targeting them to the Department of Transportation.

However, Li has concerns that while a partition can protect drivers it could also lead to passengers feeling that they have been isolated, perhaps triggering conflict.

Of all the cases on the China Judgments Online website, 46 percent involved fighting caused by passengers who had been refused permission to get off at places where there were no bus stops. Twenty percent were caused by disputes over fares.

In 30 percent of the cases, passengers not only hit the driver but also tried to grab the steering wheel.

"Bus security guards can prevent fighting by communicating with passengers and tackling a problem promptly. If a problem occurs, the guard can stop it immediately," Li said.

Beijing now has at least one security guard on each bus. Li considers installing partitions to be a "trend" but said security systems are more effective than partitions in deterring violence.

Yang Bin, head of the service department at Beijing Public Transport Group, said, "Physically separating drivers and passengers is not the best solution. What if a passenger insults the driver outside the partition? That is also disturbing and dangerous. It's more effective to solve the problem through communication," he said.

Li said security guards hired by the group must have a license issued by the public security department and also a certificate from the group after they pass an exam. The group employs 43,842 guards, and each earns 4,300 yuan (US$618) a month, involving an outlay of about 2.2 billion yuan annually for the municipal government.

However, this is a significant amount to invest on safety. Large cities such as Beijing and Shanghai have strong demand for security guards and vast financial resources, but others are unable to afford to introduce safety measures immediately.

Unlike Beijing's State-owned transport group, such companies in many other cities are privately run. Bus routes are contracted to different individuals.

Zhang Yong, who owns the franchise for 25 of the 3,284 buses running in Changchun, said he is unable to make any large investments now.

"The ticket price has remained at 1 yuan (US15 cents) for 10 years, as it is set by the city transportation authority, but other costs have risen three or even 10 times in this period, such as repairs and drivers' salaries.

"If an accident happens, I will have to spend money dealing with it. I am now trying not to incur any losses, let alone upgrade buses or even hire security guards. This is impossible for me now," Zhang said.

"To avoid accidents, we have rules for bus drivers, the most important being 'Never fight back, never shout back'. But our drivers are sometimes too tired to be polite to troublemakers.

"I have encountered about 10 accidents caused by conflict between passengers and drivers since 2008. We called the police, but each time the incidents only resulted in fines being imposed. No one was detained or imprisoned. I think stricter laws or enforcement are needed to educate and warn passengers, therefore keeping drivers and buses safe," Zhang added.

In Canada, people who assault public transit operators can find themselves facing harsher penalties under a new amendment to the Criminal Code made in 2015.

However, Chen, the law professor, said there are no such laws to categorize assaults on bus drivers in China because only a small number of accidents are caused by violence.

"The current law is governed by the results of accidents, not preventing them. Detailed laws against disturbing bus drivers who are working should be introduced in the future. In this way, sentencing will be easier and people will be more aware of what constitutes illegal behavior," he said.