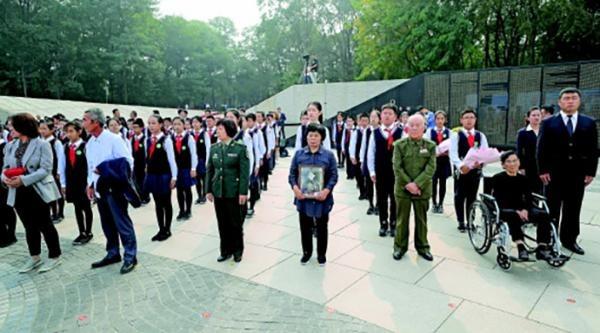 A ceremony is held in a Shenyang cemetery on Sept 29 to identify six soldiers who died in the 1950-53 War to Resist US Aggression and Aid Korea. (PHOTO / XINHUA)

Using advanced sequencing technologies, China has established its first DNA database to identify unknown Chinese People's Volunteers martyred in the 1950-53 Korean War. This allowed the remains of six Chinese volunteer soldiers to be reunited with their families after more than 65 years.

During a ceremony last month at a martyr's cemetery in Shenyang, Liaoning province, the remains of the six martyrs were identified by family members and returned after a four-year investigation by researchers from the Institute of Military Medicine under the People's Liberation Army Academy of Military Science.

It was the first time that the identities of unknown martyrs of the Chinese volunteers were confirmed through DNA testing.

The six martyrs－Chen Zengji, Fang Hongyou, Hou Yongxin, Ran Xubi, Xu Yuzhong and Zhou Shaowu－were aged between 19 and 31 when they were killed in battle, according to Xinhua News Agency.

"We lost all connection with my brother in 1949 until we got word of his death in 1953," Chen Hushan, an 82-year-old Korean War veteran and younger brother of Chen Zengji, told China Central Television.

The family's only reminder of the elder brother was a photograph taken when he was 19. Chen said that he never expected his brother would come back home because so little was known about him.

"We are brothers and brothers-in-arms," Chen said. "It is a great honor to see him. After nearly 70 years, we are finally together."

The Chinese People's Volunteers fought side-by-side with the Democratic People's Republic of Korea army against the Republic of Korea and US-led UN forces between 1950 and 1953. Around 197,650 Chinese soldiers died on the Korean Peninsula during the war, which ended in a truce in 1953.

The ROK has repatriated 599 Chinese remains, most of which have not been identified by family members

In the traditions of many Asian countries, the spirits of the dead cannot rest without a proper burial in a place appropriate to the family. Decades after the war, the absence of physical traces of the dead has driven many war-torn families to desperation, and some even sought help from ghost mediums to communicate with the underworld.

The ROK has repatriated 599 Chinese remains, most of which have not been identified by family members. Wang Shengqi, the researcher from the Institute of Military Medicine responsible for the DNA database, said his team has completed DNA analysis for 494 remains since 2015.

Identifying the dead through DNA sequencing is a challenge due to the remains being severely degraded and weathered, and yielding little to no useful bio-samples, he said.

However, Wang and his team eventually found a way to effectively extract tiny amounts of DNA from the remains and have stored the information in a database where it could be accessed easily by family members.

Still, verification by family members has proved to be another difficult task, since most of the martyrs died young and had no children, and the number of living relatives are dwindling by the day.

"It is a race against time," he said.