Reporters urged to respect each other after row at briefing 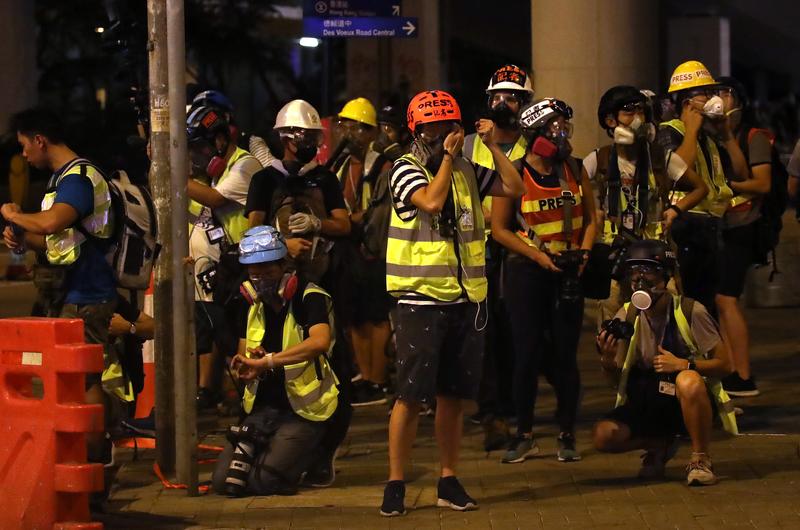 Journalists wearing helmets, goggles and face masks to protect themselves work at the epicenter of the clashes on July 29. (PHOTO / CHINA DAILY)Hong Kong police on Wednesday called on journalists to respect each other’s freedom to report news — a day after a confrontation between mainland and local reporters at a daily police briefing.

On Tuesday afternoon, Chen Xiaoqian, a reporter from Guangdong Radio and Television (GRT) — a broadcasting company — was besieged and had her credentials challenged by her local media peers after she filmed other reporters’ faces.

They demanded Chen show her press accreditation to prove her identity.

At Wednesday’s news conference, John Tse Chun-chung, chief superintendent of the Police Public Relations Branch, said police had effective procedures to verify reporters’ identities before they attend conferences, “as all of you have just gone through”.

The police news conference received considerable attention, including overseas and mainland media, he added. Therefore, police expect the journalists to respect each other, Tse said.

In a statement issued after the incident, GRT confirmed that Chen currently serves as the chief Hong Kong-based reporter for the company.

“We strongly condemn the impolite treatment of Ms Chen after the press conference,” the statement said.

It also urged Hong Kong authorities to take measures to protect the rights of journalists and create a fair, safe and stable environment for news reporting.

Hong Kong Federation of Journalists, one of the city’s largest associations for media professionals, issued a condemnation on Wednesday, saying that the incident was an “act of prejudice and discrimination”. Mainland journalists should be respected and their rights protected when reporting.

The federation called on Hong Kong and mainland journalists to learn from each other and cover news in an objective and impartial manner.

Kwok Yat-ming, vice-chairman of the federation, said that journalists are supposed to interview and film openly and freely at public occasions such as news conferences.

He suggested Hong Kong journalists respect each other’s rights. No one would accept a Hong Kong reporter being treated like this on the mainland, added Kwok.

It was the second high-profile incident in a week against mainland journalists covering Hong Kong events. Fu Guohao, a journalist with Global Times, was detained and attacked at Hong Kong International Airport on the night of Aug 13.

A woman accused of assaulting Fu was denied bail on Tuesday. Amy Pat Wai-fun, 23, was charged with false imprisonment, wounding, and participating in an unlawful assembly.