NEW YORK/CARACAS - The United States imposed new sanctions on Venezuelan President Nicolas Maduro's wife and several of his top allies on Tuesday as US President Donald Trump urged members of the United Nations to support a "restoration of democracy" in the once-booming OPEC nation.

Today, socialism has bankrupted the oil-rich nation and driven its people into abject poverty

The measure sanctioned six officials in Maduro's "inner circle," including Vice President Delcy Rodriguez and Defense Minister Vladimir Padrino, and "blocked" a US$20 million private jet identified as belonging to a front-man of a top official.

The move adds pressure to a government already widely criticized for economic collapse and undermining democracy. But it does not materially change Washington's efforts to pressure Socialist Party stalwarts who have shown no willingness to hand over power or negotiate a transition.

"Today, socialism has bankrupted the oil-rich nation and driven its people into abject poverty," Trump said in remarks to the United Nations General Assembly.

"We ask the nations gathered here to join us in calling for the restoration of democracy in Venezuela," he said.

Separately, a group of Latin American nations will present a complaint in New York on Wednesday against the Maduro administration for alleged human rights abuses to be investigated by the International Criminal Court, officials said.

Peru, Colombia, Paraguay, Chile and Argentina will be joined by Canada in submitting the initiative against Venezuela's government, according to two officials familiar with the plans.

Under Maduro, Venezuela has limited the powers of the opposition-run legislature, jailed opposition politicians and created a parallel congress with unlimited powers.

Inflation is running at 200,000 percent and basic foods and medicines, like rice and antibiotics, are increasingly difficult to obtain. That has fueled an exodus of Venezuelans to nearby Latin American countries, where borders are now overwhelmed by Venezuelan migrants.

Inflation is running at 200,000 percent and basic foods and medicines, like rice and antibiotics, are increasingly difficult to obtain

Maduro says he is the victim of an "economic war" led by US-backed adversaries. He denies limiting political freedoms, insisting opposition leaders have plotted assassination attempts and sought to overthrow him through violent street protests.

On Tuesday, he said Trump's comments were an apology for America's history of colonialism in the region and offered words of support for the sanctioned officials who joined him during an event broadcast over state television.

"I'm surrounded by sanctioned (officials)," he said. "Thank you, Donald Trump, for surrounding me with dignity."

He nonetheless said he hoped to arrange a face-to-face meeting with Trump. The White House responded to a similar request last year by saying such a meeting would happen when the country returned to democracy. 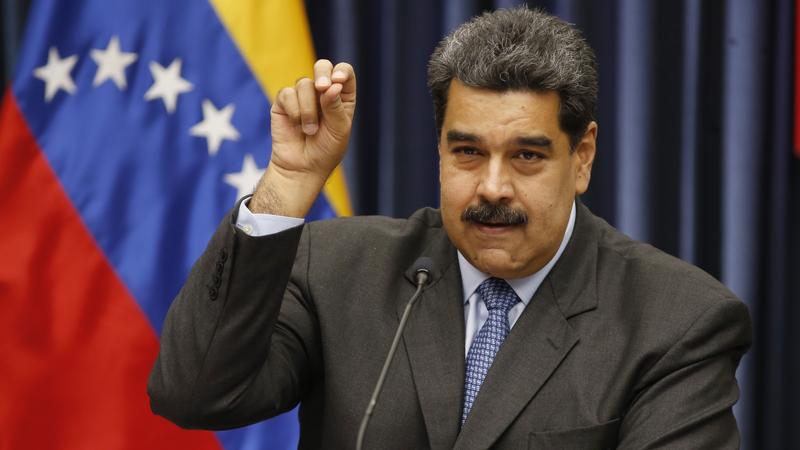 The Trump administration has levied several rounds of sanctions against Maduro's government since 2017.

Sanctions such as those published on Tuesday bar American citizens and companies from any dealings with the individuals in question, which blocks them from holding bank accounts or contracting services from US firms.

A group of US senators said on Tuesday they had introduced legislation seeking to address the crisis in Venezuela by, among other things, tightening sanctions and providing US$40 million in humanitarian aid.

US Vice President Mike Pence separately said on Tuesday the United States would provide an additional US$48 million to "partners in the region" to confront the "humanitarian crisis" caused by the growing migration of Venezuelans.

A man shows new Venezuelan bank notes he withdrew from a cash machine to others waiting in line, in Caracas, Venezuela, Aug 21, 2018. The new currency has five fewer zeros in a bid to tame soaring inflation. (ARIANA CUBILLOS / AP)

The UN migration and refugees organizations said in a joint statement in August that 2.3 million Venezuelans are currently living abroad and more than 1.6 million have left since 2015. Venezuela does not release migration figures.

Maduro says he is the victim of an "economic war" led by US-backed adversaries. He denies limiting political freedoms

But Maduro said in September no more than 600,000 Venezuelans had migrated in the past two years, and that 90 percent of them want to return.

Maduro has hung on to power in part because of continued support of members of the armed forces such as Padrino, 55, who was appointed defense minister in 2014.

The Treasury said Padrino helped ensure the military's loyalty to Maduro. In the past, it has accused high-ranking officers of corruption and undermining human rights.

Treasury also said a Gulfstream 200 private jet located in Florida had been identified as belonging to a front man of Socialist Party Vice President Diosdado Cabello, who the United States accuses of being involved in drug trafficking.

Reuters was unable to immediately obtain comment from Cabello, who denies the accusations.