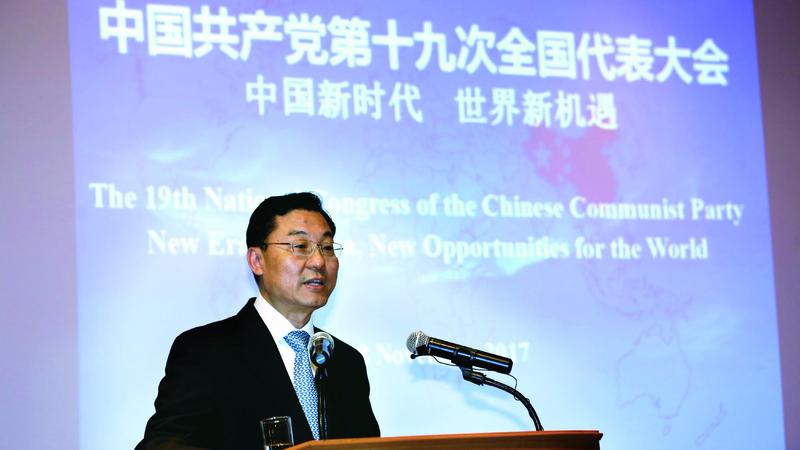 Xie Feng, commissioner of the Ministry of Foreign Affairs in the Hong Kong Special Administrative Region, briefs foreign business chambers and multinational corporations in Hong Kong on Nov 8, 2017 about the outlook the Communist Party of China presented at its 19th National Congress. (PARKER ZHENG / CHINA DAILY)

Xie Feng, commissioner of the Ministry of Foreign Affairs in the Hong Kong Special Administrative Region, elaborated on these proposals in Hong Kong on Wednesday.

Xie, briefing foreign business chambers and multinational corporations in Hong Kong, is upbeat about the new outlook presented by the Communist Party of China at its 19th National Congress in Beijing last month.

The congress noted that the nation’s development had entered “a new era of socialism with Chinese characteristics”.

To intensify the Guangdong-Hong Kong-Macao Greater Bay Area development, Xie said his office is considering building platforms for regular information exchanges between foreign commerce chambers in Hong Kong and government officials from Hong Kong and Guangdong, as well as central government authorities such as the top economic policy planning body – the National Development and Reform Commission.

READ MORE: A wealth of opportunities

The office also plans to organize visits to cities and regions involved in the Belt and Road Initiative. These aim to help chambers and foreign enterprises obtain a full picture of local policy and business environments, and seek potential cooperation projects, Xie added.

The commissioner said his office will also play a role as a bridge between the mainland and foreign commerce chambers and enterprises, conveying concerns and suggestions from them to related mainland authorities.

Xie therefore urged the foreign chambers and multinational companies to swiftly seize the many development opportunities that lie ahead. He believes the country will be more open in welcoming foreign corporations to set up regional offices on the mainland.

The briefing drew 115 representatives from 27 Hong Kong-based foreign commerce chambers and multinational companies, including those from Britain, the United States, Singapore and Japan.

Andrew Seaton, executive director of the British Chamber of Commerce in Hong Kong, said the number of representatives from business chambers and international companies was a sign of a high level of interest in strategies set out in the 19th Party Congress.

This interest also means the business sector wants to know more about the implementation of strategies as well as business opportunities awaiting Hong Kong-based business.

Seaton was also impressed by the number of Greater Bay Area-related questions participants raised at the briefing. This showed many Hong Kong-based multinational companies paid great attention to this strategy and wanted to integrate their development into it.

Tara Joseph, president of the American Chamber of Commerce in Hong Kong, said the briefing gave US businesses insights on exploring tangible opportunities under new economic policies rolled out during the congress.

She said the US side was actively exploring potential cooperation within the bay area, especially in the logistics, education and technology sectors.