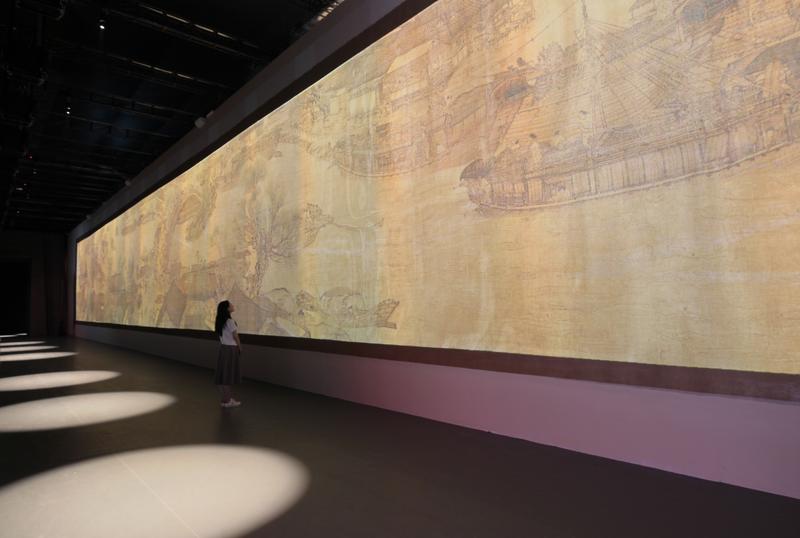 A visitor is watching the digital and animated version of Along the River during the Qingming Festival. PROVIDED TO CHINA DAILY

The famed classic Chinese scroll painting, Along the River during the Qingming Festival, will have its digital translation showcased in Hong Kong this summer  –  providing audiences with a vivid animated version of the 5.28-meter scroll  –  currently housed in the Palace Museum in Beijing.

From July 26 to Aug 25, the painting will be on display in an exhibition entitled "A Journey Through Springtime Along the River" at the AsiaWorld-Expo. The original scroll will be presented on 5-meter-high and 30-meter-long screen, where audiences can watch figures in the painting move like an animation.

This exhibition is not limited to the digital presentation of the painting but extends to the social and cultural background of the commercial prosperity in the Northern Song Dynasty reflected in the painting, which will provide a broader perspective for audience to understands the development of Chinese civilization

The animation was hand-drawn by over 20 painting masters over 400-day period. Hence this digital format is close to the original one, said Lee Li, general manager of Phoenix Digital Technology under Phoenix TV. Her company is one of the exhibition organizers.

Painted by 12th-century painter Zhang Zeduan, Along the River during the Qingming Festival depicts daily street life along the Bian River in Bianjing – now Kaifeng in Henan province. The digital format was showcased at the Palace Museum before coming to Hong Kong.

The exhibition, which is also hosted by the Palace Museum, with Bank of China Hong Kong as the chief charity partner, consists of six features besides the digital painting.

One feature, Inside the Open City, will have eight settings that reproduce some scenes from the original painting. Meanwhile, there will be 10 interactive art installations – inspired by classic elements of the painting. These will be seen in the eight settings to help visitors appreciate life during the Song Dynasty.

Another feature, Song Dynasty Park, is an interactive zone for both children and adults. Through this, they can learn about Song Dynasty culture through hand fan drawings, lantern riddles and other aspects of traditional culture.

There is also a feature named Bian River Harbour. It’s a 180° spherical theater which displays the Bian river from dawn until dusk. Visitors will feel like they are sailing on the river and experiencing the Song Dynasty life while watching a movie inside.

“This exhibition is not limited to the digital presentation of the painting itself as before, but extends to the social and cultural background of the commercial prosperity in the Northern Song Dynasty reflected in the painting. This will provide a broader perspective for audience to understands the development of Chinese civilization,” said Guan Qi, the Vice President of the Palace Museum Culture&Media Co., Ltd.