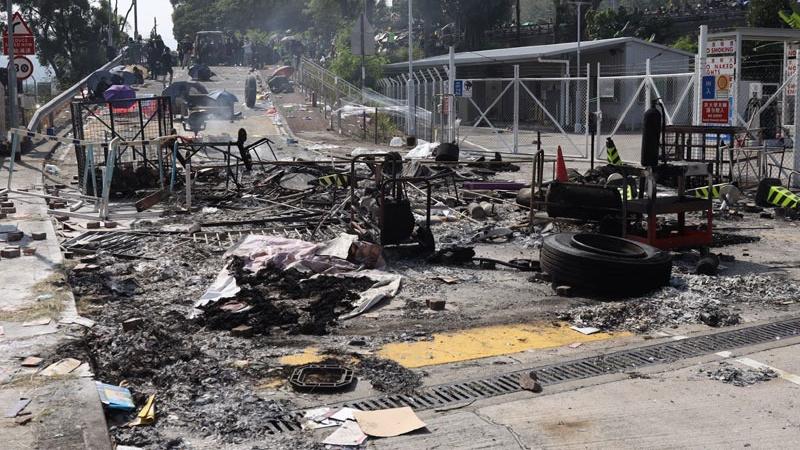 Burned debris are scattered at an entrance to the Chinese University of Hong Kong campus, Nov 13, 2019. (PHOTO / CHINA DAILY)

HONG KONG - More than 150 faculty members and staff of the Chinese University of Hong Kong (CUHK) called on the CUHK to condemn the use of violence by protesters, which has brought the university to a complete standstill for days.

"We now call on the university to make an official announcement to condemn the destruction the protesters have done to our cherished campus, and the fear and disruption they have brought to the community," they said in a joint statement published on Friday.

The statement said the university has become a true battlefield with fear and anxiety spreading among students and faculty members.

"However, to our greatest disappointment, the university administration leaders have not taken timely and adequate measures to protect our non-local students or even condemn the violence or threat against them in the previous public announcements," according to the statement.

The CUHK has been plunged into chaos as rioters committed vandalism on the campus, occupied the entrance, blocked a highway nearby, and forced the university to cancel all classes.

The Hong Kong police said on Wednesday that they have strong suspicions that the campus was being used by rioters as a "weapons factory" producing several hundred gasoline bombs which have been thrown in the ruckus.

CUHK president Rocky Tuan admitted on Friday that the situation was completely out of control and condemned road-blocking behaviors, citing illegal and violent acts at the campus from producing gasoline bombs to vandalizing canteens.

In an open letter, Tuan urged masked protesters coming from the outside to leave the campus and said the university will resort to related government departments if it cannot fulfill its responsibility.

On Friday, Hong Kong police said rioters were occupying several universities and escalating violence on and around the campuses, warning against turning the universities into "riot bridgehead".