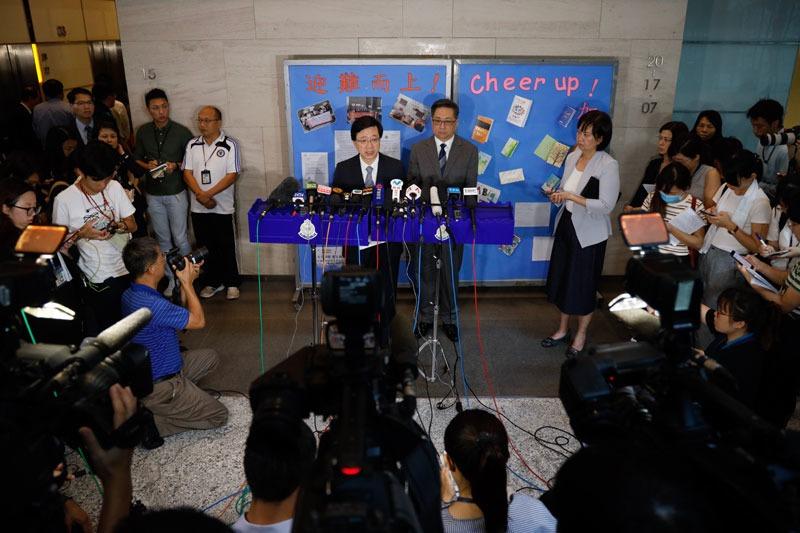 Hong Kong’s top security officials rallied on Thursday to denounce the provocative acts of protesters who besieged police headquarters in Wan Chai for the second time in less than a week, promising to launch a thorough investigation.

Urging the public to express their views peacefully and rationally, Secretary for Security John Lee Ka-chiu warned that police will take whatever action necessary against any behavior that endangers public order & security

They also expressed gratitude to the frontline officers for their restraint in the face of the demonstrators’ provocative behavior.

Speaking to the media, Secretary for Security John Lee Ka-chiu condemned the “fragrant acts of provocation, insults and attacks” against the police by some protesters during Wednesday’s six-hour siege, saying their conduct had “gone beyond the boundary” of freedom of speech and assembly.

He praised the officers’ “most restrained attitude” and professionalism shown during the siege, saying he’s grateful for their hard work during such a difficult time.

Late on Wednesday night, hundreds of demonstrators blocked all entrances to the headquarters complex with metal barriers, preventing staff from entering or leaving.

Some of them hurled eggs and bottles at the complex, plastered the walls with graffiti, destroyed closed-circuit television cameras outside the building, and used laser pens to flash at officers.

Chow Pak-chin, former president of the College of Ophthalmologists of Hong Kong, warned that laser pointers might cause permanent damage to eyes which cannot be cured by surgery or medication.

Services in the Wan Chai Division’s report room, which is located within the headquarters complex, had to be suspended, and 18 calls to the 999 emergency hotline could not be attended to.

Urging the public to express their views peacefully and rationally, Lee warned that police will take whatever action necessary against any behavior that endangers public order and security.

“Please don’t vent your anger at the police, no matter how dissatisfied you are with the government,” he said, reiterating that the special administrative region government will be more attentive to public opinion.

Commissioner of Police Stephen Lo Wai-chung, also speaking to the media, strongly deplored the unlawful behavior, stressing that police will conduct a stringent probe into such acts.

He stressed that restraint by police does not mean there would be no consequences for the violent and unlawful acts by protesters.

The police chief appealed to the public to stop targeting officers over political issues.

The police said one man was arrested for assaulting an officer during Wednesday’s siege, which ended after the protesters were eventually dispersed.

However, the protests continued on Thursday when more than 100 people gathered in front of the Department of Justice in Justice Place, Central, to reiterate their opposition the suspended extradition bill.

Kathy Zhang contributed to the story.