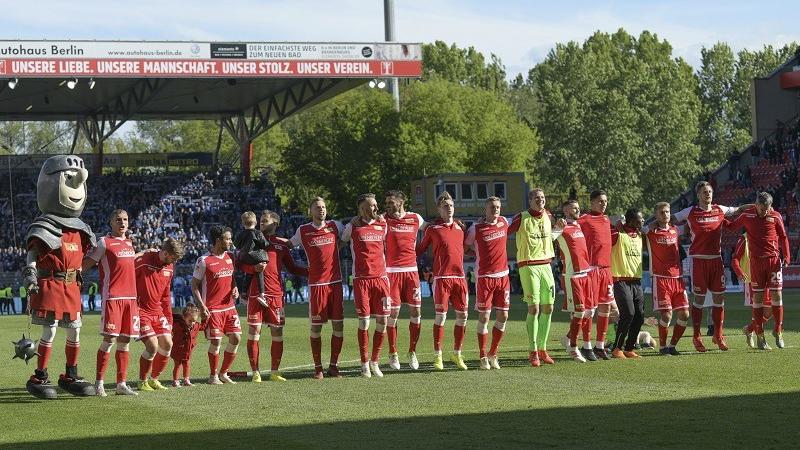 Players of the 1. FC Union Berlin from Germany's second Bundesliga celebrate after they win 3-0 against 1. FC Magdeburg in Berlin, May 12, 2019. (JOERG CARSTENSEN / DPA VIA AP)

They lingered long after their team's 3-0 win over Magdeburg on Sunday, sitting at picnic tables among the trees, raising their plastic glasses and singing songs in anticipation of joining German soccer's top clubs for the first time.

With one game remaining, Union is virtually assured of at least reaching a playoff for the Bundesliga, while the team can secure automatic promotion with a win at Bochum next Sunday if Paderborn loses at Dynamo Dresden at the same time.

Paderborn is currently one point ahead of Union in second place and in the better position to join champion Cologne in the top division. Union, three points ahead of Hamburger SV and with a far superior goal difference, will finish third at least, meaning a two-leg playoff against Stuttgart, which finished in 16th place this year.

Union can become the first club from East Germany's Oberliga to play in the Bundesliga since Energie Cottbus was relegated in 2009.

"The whole club, the fans, everyone around here deserves it," said Union forward Sebastian Polter, who scored two goals against Magdeburg.

Union's best campaign in the second division has been helped by the toughest defense in the league and the best record at home - now 11 wins, five draws and only one loss.

Fans were already in party mood before kickoff at Union's Stadion An der Alten Försterei (Stadium at the Old Forester's House) in the eastern borough of Köpenick. Full with 22,000 fans, it had been sold out for weeks.

Magdeburg needed a win to avoid relegation to the third division and the game, an old East German derby, was given added spice because of animosity between both sets of fans. There was increased security because of the presence of ultras from Dynamo Berlin, Union's hated city rival, in the visiting fans' block.

Union, which traces its beginnings back to 1906 as Olympia Oberschöneweide, received its current name in 1966 and it prides itself on its resistance to the East German regime - in contrast to Dynamo, which was Stasi chief Erich Mielke's club. Amid allegations of match-fixing and politically influenced favors, Dynamo went on to win 10 straight East German titles between 1979-88, but reunification wasn't kind to the club and now it languishes in the fourth division.

Union also had a spell in the fourth tier, but it has weathered financial difficulties to become Berlin's second-best supported side after Hertha Berlin.

Sunday's game was interrupted for several minutes toward the end because of trouble in the Magdeburg block, where some fans attempted to force their way through a security fence. The home supporters reacted with whistles and insults.

Earlier, the visiting fans marked kickoff by setting off pyrotechnics - banned to little avail by the authorities - before waving blue and white balloons.

But the visitors were drowned out by the home fans, who sang about "our love, our team, our pride, our club, our Union Berlin," and raised their hands to clap the team on.

Union has fostered a close relationship with its fans. They came to the financially strapped club's rescue in 2008 when it needed to modernize its stadium. About 1,600 volunteers contributed an estimated 90,000 hours of work to save on construction costs. Four years before, fans gave blood to raise money under the slogan "Bleed for Union."

Promotion would help repay the effort. Union midfielder Grischa Prömel scored in the eighth minute against Magdeburg, Polter made it 2-0 and then got his second in the lengthy injury time caused by the crowd disturbances.

Union fans taunted the visitors and were slow to leave the stadium, pausing for beers, buying souvenirs at the club shop and enjoying the good vibes helped by the sunshine.

"There's still a lot at stake, but we're relying on help from Dresden," Fischer said. "It will be a tough job. We haven't won anything yet."