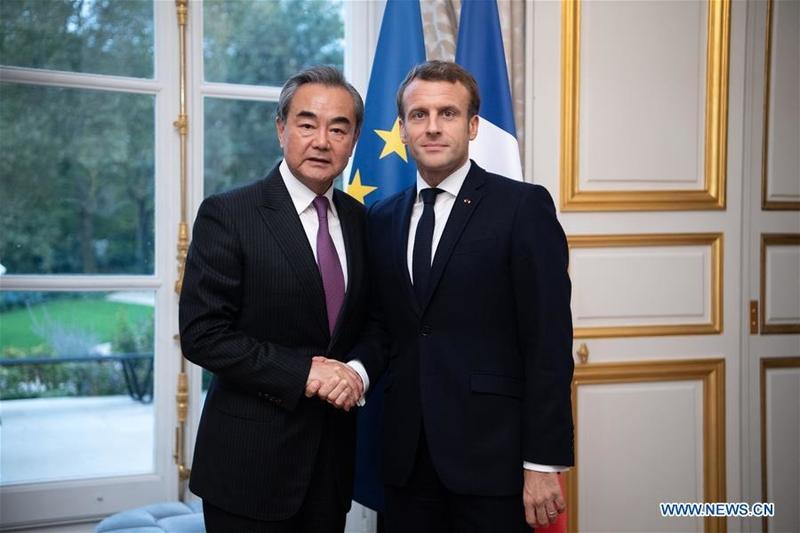 Macron said Xi paid a successful state visit to France in March and reached important consensus with him on further developing France-China relations.

Macron said he is looking forward to his upcoming state visit to China, during which he will attend the second CIIE in a bid to lift France-China comprehensive strategic partnership to a new stage and make new strides in cooperation in areas including trade, agriculture, finance, civil nuclear power, and people-to-people exchanges

The French president said he made a phone call with Xi last week and exchanged views in a comprehensive and in-depth manner on bilateral ties and practical cooperation.

Macron said he is looking forward to his upcoming state visit to China, during which he will attend the second China International Import Expo (CIIE), in a bid to lift France-China comprehensive strategic partnership to a new stage and make new strides in cooperation in areas including trade, agriculture, finance, civil nuclear power, and people-to-people exchanges.

France is actively committed to promoting the development of Europe-China relations and is willing to enhance coordination and cooperation with China in multilateral and global affairs to jointly address such global challenges as the fight against climate change and the protection of biological diversity, he said.

For his part, Wang conveyed President Xi's cordial greetings to the French president.

Noting that China warmly welcome Macron for his upcoming visit, Wang said the visit will be another important strategic communication between the two world's major countries as well as two permanent members of the UN Security Council and two civilizations representing the East and the West.

At present, unilateralism and protectionism are prevailing, and it is necessary for China and France to join hands in maintaining multilateralism and upholding the authority of the United Nations and basic norms governing international relations, said Wang, adding that these are the global responsibilities that both countries should shoulder.

Wang noted that China is working with France to make careful preparations for Macron's visit and accumulate more achievements to ensure the success of the visit and to send out a positive signal of enhancing China-France cooperation to the international community.

He said that China will further open up to countries including France, and China welcomes President Macron to attend the second CIIE to bring more quality French-style products. 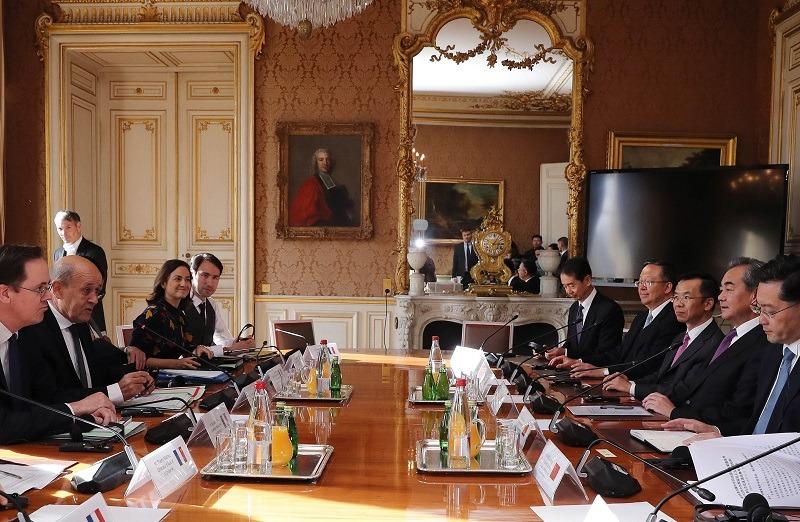 Earlier in the day, Wang met with French Foreign Minister Jean-Yves Le Drian and co-chaired the fifth meeting of the China-France High-level Mechanism for Dialogue on People-to-People Exchanges.

Xi and Macron, from a strategic height and with a long-term vision, attach great importance to and push forward people-to-people exchanges, and they both noted that the China-France High-level Mechanism for Dialogue on People-to-People Exchanges should fully play its planning and coordinating role, Wang said.

Wang noted that the two sides should implement the important consensuses and instructions of the two heads of state, ensure the good functioning of the mechanism, explore unique cultural advantages of the two countries, and further strengthen the social foundation and public support, so as to forge a more solid, stable and energetic China-France comprehensive strategic partnership.

During his meeting with his French counterpart, Wang Yi called on China and France to boost mutual learning between civilizations, and set a model of harmonious coexistence and win-win cooperation between different civilizations

He called on China and France to boost mutual learning between civilizations, and set a model of harmonious coexistence and win-win cooperation between different civilizations.

The two countries should focus on future cooperation, comprehensively deepen the cultivation of high-level talents, enlarge the scale of two-way student exchanges, and elevate the level of cooperative education.

Wang also suggested broadening civil participation, saying the two sides should not only ensure that main channels in governmental cooperation are kept free, but also develop more platforms for non-governmental exchanges, and actively promote exchanges and cooperation among youths and women.

For his part, Le Drian said the China-France High-level Mechanism for Dialogue on People-to-People Exchanges has become a crucial part of Sino-French relations, and has made remarkable achievements.

France is willing to deepen people-to-people exchanges in a spirit of openness and mutual respect, and push for more fruitful results, so as to better benefit the two peoples and promote dialogue and mutual learning among civilizations, Le Drian said.

He said France hopes to jointly host a culture and tourism year in 2021 with China to boost exchanges and cooperation in the fields of sports, education, youth, women, and others.

Wang and Le Drian also had an in-depth exchange of views on international and regional issues of common concern.