Two journalism graduates take a break from their studies to make a documentary on people-to-people links with Malaysia, Wang Ru reports. 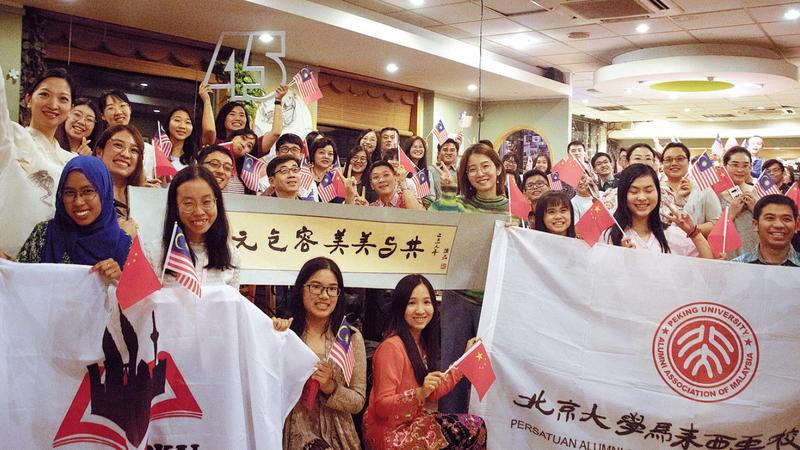 Students and teachers of Peking University attend a premiere of a documentary made by Hu Yuanjing (second from left, second row) and Wang Zehua (fourth from right, first row), to mark 45 years of diplomatic relations between China and Malaysia. (PHOTO PROVIDED TO CHINA DAILY)

Hu Yuanjing, who took a gap year during her postgraduate studies, was a little surprised to find that the Malaysian Chinese and the Chinese share a similar tradition when it comes to not wasting food.

"In China we are told from childhood that we should not waste food, and a 'clearing the plate' campaign was started in China several years ago to tell people not to waste food. In Malaysia it is a tradition to show gratitude to ancestors who struggled to lay the foundation for their offspring to succeed," says Hu, who explored relations between China and Malaysia in July when she was making a documentary entitled Multi-Cultures Intertwined in Harmony, with her friend Wang Zehua, both 25 years old.

Around 50 people attended the premiere, and sampled traditional Malaysian food while watching the documentary. The documentary is now available on YouTube and Tencent with both Chinese and English subtitles.

The 20-minute documentary, based on personal experiences of three generations of the two peoples, has three parts. The first part is about people who witnessed or contributed to establishing the diplomatic relationship in 1974. Initially the ties were only at the government level, with few people-to-people contacts, Abdul Majid Ahmad Khan, president of the Malaysia-China Friendship Association, says in the documentary. The former Malaysian ambassador to China says when the reform and opening-up was just beginning in China in the late 1970s, there was caution for investment from Malaysian businessmen at the start, although the two countries had established ties and China was seeking foreign investment. The contacts between the two countries then were chiefly at the political level.

The second part focuses on middle-aged people who made the effort to boost trade and commerce exchanges between the two countries, like Chinese businessman Li Zhongping, general manager of GTC Travel Group who has lived and run his business in Malaysia for over 20 years, as well as farmers and traders from the agricultural sector, especially the fruit business. 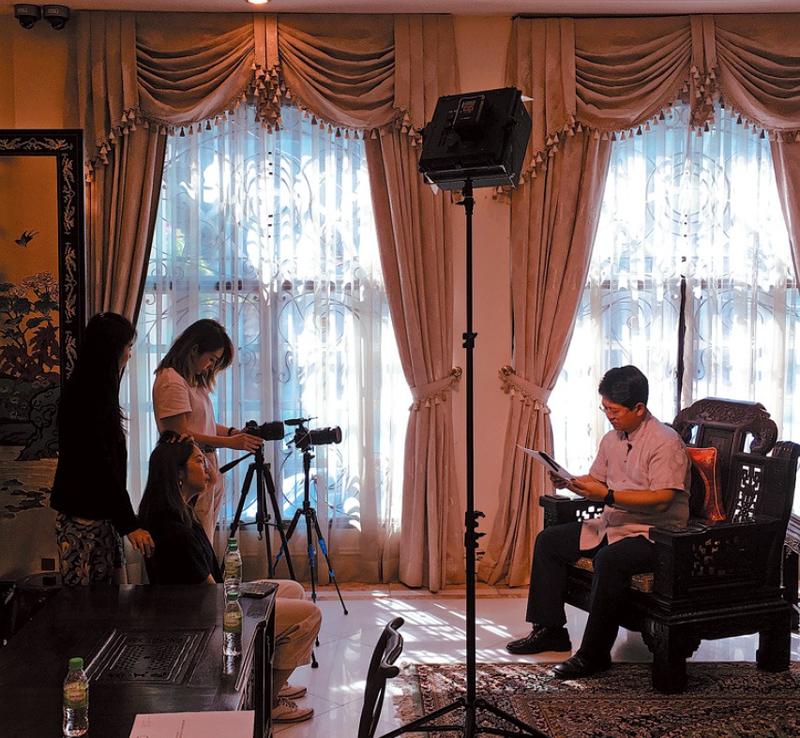 The production team of the documentary entitled Multi-Cultures Intertwined in Harmony in filming at the residence of the Chinese Ambassador to Malaysia, Bai Tian. (PHOTO PROVIDED TO CHINA DAILY)

The last part is about how young people communicate in the present day. In the film, Yang Purui, a Chinese student who is studying at Xiamen University's Malaysia campus, says initially he was worried that cultural differences may affect his life in Malaysia. But after a year of studying there, he has found "cultural diversity did not hinder my making friends with local classmates at all", but rather it made daily interactions more colorful. "I have even managed to get on well with people of other backgrounds through learning hip-hop," he says.

After graduating from Peking University, Hu and Wang parted ways and went on to pursue master's degrees respectively in the United States and the United Kingdom. But in July 2018, after a year of their postgraduate studies, they both chose to take a gap year together, to explore the world. They wanted to "do something interesting "and looked for suitable projects. They then met PKUAAM's president, Nai Chen Huang, who suggested making a documentary on Sino-Malaysian relations.

Nai, who attended the premiere, praises the duo's professionalism and dedication in making the documentary, adding:"We wanted to tell stories about the friendship between China and Malaysia, and pass on the friendship to future generations."

As for the audience, the reactions were mixed. Some teachers, including He Shu, from PKU's school of journalism and communication, says the subject was "too broad a theme" for the young directors to handle. But she also praises the team's efforts.

But others, especially the younger viewers, are more positive, saying it opened a new window for them.

Ren Zhenru, a 24-year-old alumna of the university who attended the premiere, says:"I have not been to Malaysia. But after watching the documentary, I got to know something more about this country and its friendship with China.

"Now I am interested in this country and hope to visit it in the future."

Ren's view is echoed by Wang, who recommends students go out to see and experience the world with their own eyes. She says, citing an example of the difference between knowledge and on-site realization:"Before we went to Malaysia, I had been told it is a society with multiple cultures (Malaysia is made up mainly of Malays, Chinese and Indians).But when we got there, I was overwhelmed to see a Hindu temple, a Chinese ancestral hall, a mosque and a church on the same street in the state of Penang."

The production team comprised three members - Hu, Wang and photographer Deng Dashuai, 24, a graduate from Communication University of China. Over July 12-28, the team interviewed more than 20 people while recording footage in Beijing, Kuala Lumpur and Penang.

Speaking about their experiences during filming, Hu recounts how they had to go into the jungle to find their rented drone which ran out of electricity.

"We used to get up very early and go out for the whole day for interviews. But when we got back at night, the work was not over because we had to edit the footage and prepare for the next day," Hu recalls. "One night, when we came back to where we lived, we saw the swimming pool and just jumped into it."

Wang also talked about their other documentaries made over the gap year, including herders' lives on the Qinghai-Tibet Plateau and clay handicrafts. They held temporary art fairs on two occasions in Beijing and Xining, Qinghai province, where they invited artists to show their work related to charity themes such as wildlife protection.