Return of the cheese man 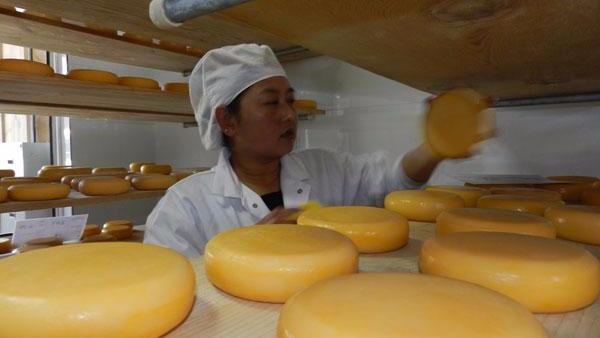 Yellow Valley trained a local housewife who had never had a job before, Qing Qing, to be its resident cheesemaker. (Photos Provided To China Daily)

When I first encountered the cumin-flavored variety of Marc de Ruiter's Gouda, I suspected he was making cheese "with Chinese characteristics".

"Not at all," he laughs when we met recently for lunch in Beijing. "That's a very popular flavor in Europe. We eat it at home."

But if cumin's popularity in China helps people to embrace his cheese, he's happy for the chance to appeal to both Eastern and Western palates.

"While the spices are the first thing you notice," he writes on the company's website, "they still do nothing to detract from the smooth, creamy flavor of the cheese within."

An East-West mission also fueled his cheese-making in China when it first began in 2004.

"We Dutch like our cheese," he said in a 2010 interview with China Daily. "But it's not easy in China to get the cheese we are used to."

Return of the cheese man

De Ruiter's craving coincided with a dark moment in China's agriculture: the melamine scandal that squashed demand for made-in-China milk products. The Dutch agronomist, who had been living in China since 1997, watched in horror as small-scale farmers in Shanxi province dumped their unsellable but perfectly good fresh milk down the drains.

He was angry about it then - and now.

"These little guys were not the problem - country farmers are not chemists," he says. "How would they know how to make fake protein or have the capacity to produce it?" 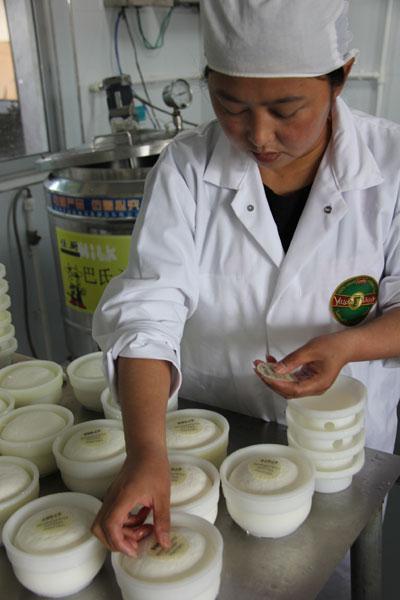 Yellow Valley trained a local housewife who had never had a job before, Qing Qing, to be its resident cheesemaker. (Photos Provided To China Daily)

De Ruiter originally launched Yellow Valley both to support the small farmers around him, promote organic farming methods and to excite expats who missed their artisan-style cheese. There were five flavors on offer: Original, herbs de Provence, onion with garlic, spicy Italian and cumin.

"The recipe hasn't changed in 100 years," he says. "We found we were able to make cheese that was as good as we could get in the Netherlands."

The dairy scandal that launched his business, however, came back to bite it. By 2011, government regulators had moved strongly to revive the industry, and one requirement - urged by the big commercial producers - was an industrial-level testing lab in every dairy facility.

"Small producers, who hadn't caused the problem in the first place, were pretty much cut out of the business," he says. Yellow Valley shut down.

But De Ruiter kept getting calls and emails from shops and individuals who had become fans of his farmhouse-style Goudas, and he hit on a solution that fit in with the new regulations. He could make artisan cheese if it was produced from a single farm, at that farmhouse, and if he sold only online, such as his WeChat and Taobao stores as well as sites like Group Mall. No brick-and-mortar third-party stores or distributors. 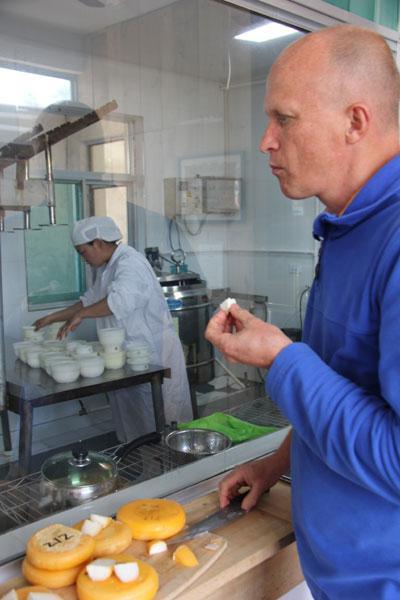 Marc de Ruiter savors his Chinesemade artisan cheese, which he says measures up to the Netherlands’ own farmhouse Gouda. (Photos Provided To China Daily)

As a semi-hard cheese with a wax coating, Gouda keeps better than soft varieties and ships well without added preservatives.

"We can make about 600 cheeses a month like that," he says of his new set-up in the village of Chenjinyi in Shanxi province. "In summer, when cheese sales drop, we'll shift to producing milk and yogurt."

The smaller scale actually suits him. "It's more like the Dutch farmhouse model that I always wanted to replicate. If we grow beyond that, I could find another farmer and set up another self-contained operation there. But we'll see."

Now that he's back after a four-year hiatus, De Ruiter is on a mission to explain why slightly more expensive artisan cheese is so much better than the industrial-scale version. His prices start at 59 yuan ($8.56) for 350 grams, while longer-aged Brokkelkaas cheese runs 80 yuan.

"Industrial cheese made at higher temperatures damages proteins," he says, which means it's less healthy though it keeps much longer. "Artisan cheese has no preservatives - it will get moldy if it's not eaten fairly quickly. But that doesn't mean it's gone bad."

Industrial cheese wherever it's made is often sweetened, sometimes with chocolate or strawberry flavors in China, he says. "Much of it is only about 50 percent cheese, and the rest is other stuff added."

The smiling Dutchman has a test he swears by.

"You can't catch mice with industrial cheese," he insists. "Mice can tell the difference, and so should we."