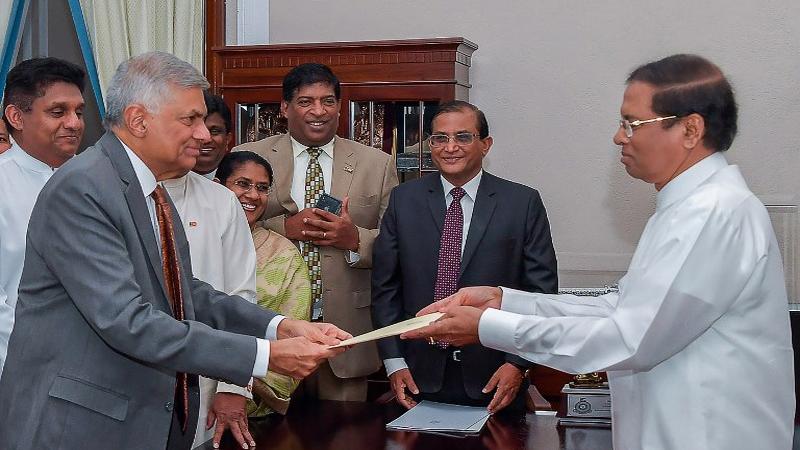 President Maithripala Sirisena administered oaths in a private event. Wickremesinghe's reinstatement as prime minister earlier this week and the appointment of a new Cabinet will result in Sri Lanka's government resuming functions that have been obstructed since October, but continued acrimony between Sirisena and Wickremesinghe means the crisis is far from over.

Notably, Sirisena has not appointed a law and order minister, a crucial post for investigating corruption and crime allegations against former strongman Mahinda Rajapaksa, his family and government members. Wickremesinghe promised such investigations before the 2015 elections.

Sirisena sparked the crisis in October when he suddenly sacked Wickremesinghe and appointed former President Rajapaksa in his place.

Wickremesinghe insisted he was sacked illegally and hunkered down in the prime minister's official residence in Colombo, while Rajapaksa failed to secure majority support in Parliament in two chaotic no-confidence votes.

Sirisena dissolved Parliament and called for elections. The Supreme Court first suspended the move and later declared the dissolution unconstitutional.

Separately, the Court of Appeal ordered Rajapaksa and his Cabinet to cease functioning. As a result, the newly-restored government in Sri Lanka has only 11 days left to pass a budget to provision state money in 2019.

After reappointing Wickremesinghe, Sirisena made a speech saying he doubted that the new arrangement would last long. Sri Lankans are not due to go to the national polls again until 2020, but if the government fails to function, Parliament can pass a resolution with a 2/3 vote for snap elections.

Sirisena was health minister in Rajapaksa's Cabinet when he defected and joined Wickremesinghe to challenge Rajapaksa in the 2015 presidential election. After victory he formed a government with Wickremesinghe as prime minister but the two disagreed on everything from economic reform to investigating alleged government abuses during Sri Lanka's decades-long civil war.