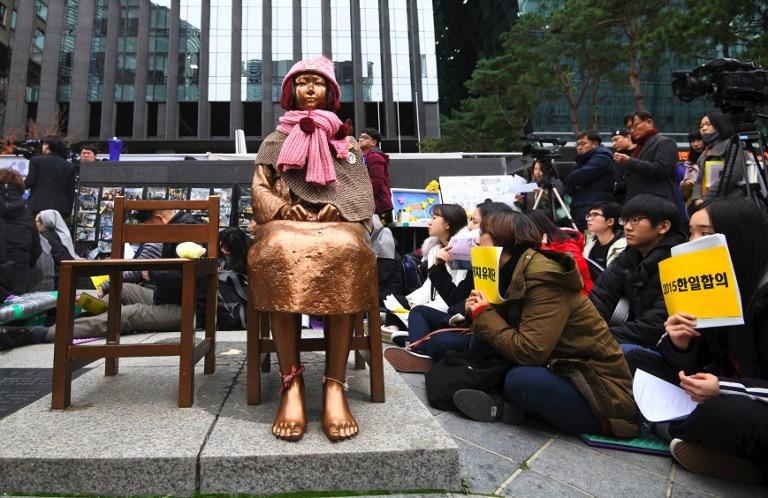 South Korean protesters sit near a statue of a teenage girl symbolizing former "comfort women", who served as sex slaves for Japanese soldiers during World War II, during a weekly anti-Japanese demonstration in front of the Japanese embassy in Seoul on Nov 21, 2018. (JUNG YEON-JE / AFP)

DAEGU — When 17-year-old Lee Yong-soo returned home to the Republic of Korea (ROK) in 1945 after years as a child sex slave for Japanese troops, her family, having given her up for dead, thought she was a ghost.

“When I returned, I had a deep wound,” Lee told Reuters, holding a black and white photo of herself in a traditional Korean dress, taken in her first year back home.

She still remembers the blue and purple fabric of that dress, but other memories from those years are more traumatic.

“I thought I was going to die,” Lee said of the abuse and torture she endured in a brothel at an airfield in Taiwan used by Japanese kamikaze pilots in the final years of World War II.

Now 90 years old, Lee says she feels like a sincere apology from Japanese authorities for the wartime exploitation of so-called “comfort women” is no nearer now than when she returned home more than 70 years ago. 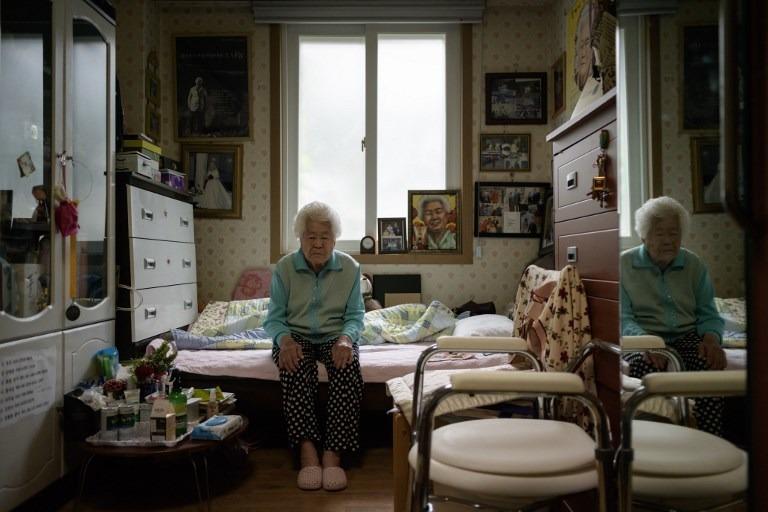 Former "comfort woman" Lee Ok-sun sits in her bedroom at the "Sharing House", a commune and nursing home for former comfort women, in Toechon village, east of Seoul on April 8, 2018. (ED JONES / AFP)

Japan says the claims have been settled by past agreements and apologies, and that the continued controversy threatens relations between the two countries.

Some historians estimate 30,000 to 200,000 Korean women were forced into sex slavery during Japan’s occupation from 1910 to 1945, in some cases under the pretext of employment or to pay off a relative’s debt.

Now with only 27 registered ROK survivors still alive, there is a sense of urgency behind efforts by the women to receive a formal apology as well as legal compensation from Japan while their voices can still be heard.

Just days before Reuters interviewed Lee at her one-room apartment in the southern city of Daegu, a fellow victim had died, one of six so far in 2018.

Another survivor, Kim Bok-dong, said she wanted to share her story, but suffering from cancer and expected to live only a few more months, she was unable to find time to speak.

Under the 1965 treaty, Japan reached a deal with the ROK to provide an US$800 million aid-and-loan package in exchange for Seoul considering all wartime compensation issues settled.

An ROK panel late last year concluded a separate 2015 deal between the ROK and Japan had failed to meet the needs of former “comfort women”.

Acting on that conclusion, the ROK government this week shut down a fund created under the 2015 deal and vowed to pursue a more “victim-oriented” approach, a move Japan said threatened the two countries’ relations.

A sense of shame and secrecy meant most tales of abuse and coercion at the brothels for Japanese troops were never discussed publicly, until Kim Hak-sun, one of the ROK victims, came forward in 1991. 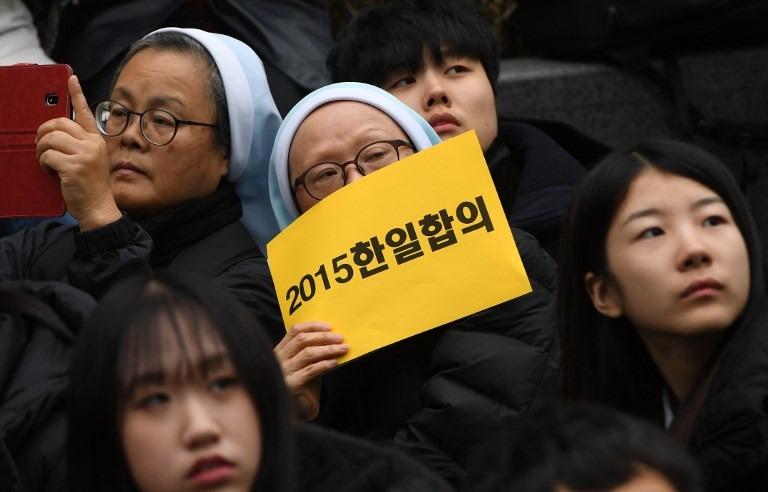 A protester from the ROK holds a sign reading "2015 ROK-Japan agreement" during a weekly anti-Japanese demonstration supporting "comfort women", who served as sex slaves for Japanese soldiers during World War II, in front of the Japanese embassy in Seoul on Nov 21, 2018. (JUNG YEON-JE / AFP)

She and two other former comfort women joined a class action lawsuit against Japan, which prompted the Japanese government to acknowledge its role for the first time in 1993. The case was eventually dismissed by Japan’s highest courts in 2004.

Lee was one of the survivors emboldened by Kim’s move, and has since worked to raise awareness, including meeting the Pope and traveling to the Democratic People's Republic of Korea (DPRK) to meet other victims.

“Since 1992, I had been asking Japan to make sincere apology, that is what I want,” Lee said. “I have been doing this for 27 years, it doesn’t matter whether it was raining or snowing, or the weather was cold or hot.”

I have been doing this for 27 years, it doesn’t matter whether it was raining or snowing, or the weather was cold or hot

From 1995 to 2007, Japan created a fund from donations to make payments to women throughout Asia, budgeted money for their welfare support and sent letters of apology from successive premiers.

While a number of survivors have accepted compensation over the years, many ROK people see the issue as unresolved because of what they consider a lack of sincerity from the Japanese government.

Despite apologies from Japan, for example, the first comfort women fund was criticized in the ROK for not being direct compensation from the state, and the 2015 deal was faulted for failing to include a clear statement of the Japanese government’s legal responsibility.

Japan says the ROK had waived all claims in the 1965 pact, and that under the 2015 deal, Japan agreed to provide the funds to help the women heal “psychological wounds”.

Critics of the ROK have also accused it of ignoring the complicity of some Koreans in the sex trade at the time.

Shutting the Japan-funded foundation is one of the most significant steps President Moon Jae-in’s administration has taken as it revisits the comfort women controversy.

In the past year, the ROK has also opened a new research center aimed at consolidating academic study of comfort women, named the first Comfort Women Day and unveiled a new memorial in Cheonan, a city south of Seoul.

“We cannot ignore the truth just because it hurts,” Moon said this week. “For the sake of sustainable and solid Korea-Japan relations, we must face up to the truth.” 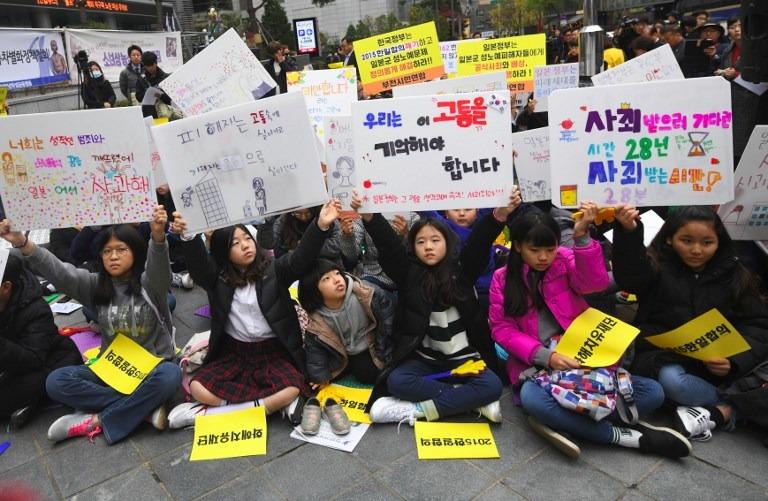 ROK protesters hold up signs during a weekly anti-Japanese demonstration supporting "comfort women", who served as sex slaves for Japanese soldiers during World War II, in front of the Japanese embassy in Seoul on Nov 21, 2018. (JUNG YEON-JE / AFP)

Lee said she thinks Moon is “trying his best,” and in a statement released from her hospital bed this week, Kim said the move to close the foundation restored her trust in the ROK president.

Earlier this year, Japan formally complained after the ROK’s foreign minister raised the issue in a speech at the United Nations.

Japanese officials have expressed frustration at what they see as the ROK government’s changing positions and efforts to revisit settled agreements.

“The survivors of the heinous crimes the Japanese committed are dying day by day, and I bet Abe is dancing for joy,” Lee said, becoming animated as she described her frustration. “They should apologize, tell the truth, and pay the legal compensation.”