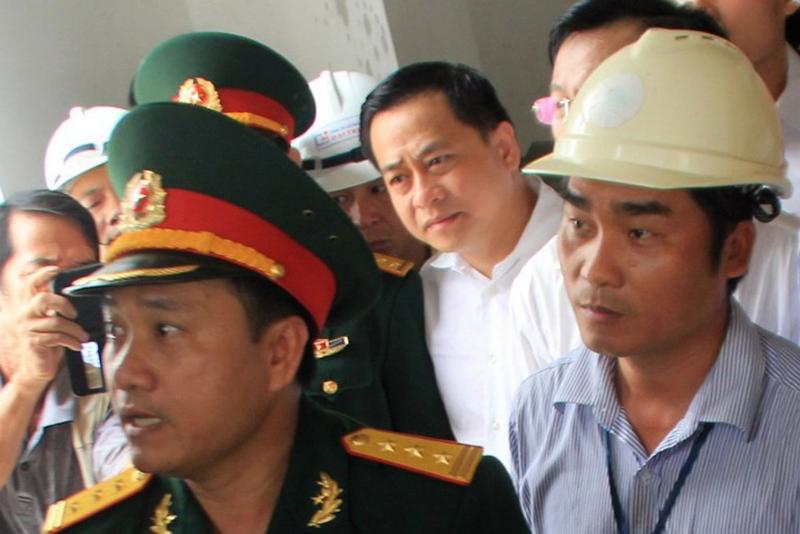 This April 29, 2016 picture shows Phan Van Anh Vu, center, a former senior intelligence officer of Vietnam, at a local event in the central coastal city of Da Nang. Vu was arrested in January following his deportation from Singapore after using a false identity to enter the city state. (PHOTO / AFP)

HANOI — Vietnamese police have ordered the arrest of several former officials and police officers with alleged ties to a real estate developer who was arrested after being deported from Singapore.

As part of a continuing, widened crackdown on corruption, police said they are investigating a total of seven individuals.

The most prominent among them include Tran Van Minh, who served as mayor of Danang, Vietnam's fourth largest city from 2006 to 2011, when he was appointed as deputy head of the Communist Party's personnel committee. He is accused of violating regulations on managing and using state property, causing losses and breaking state regulations on land management.

Four other former or current Danang officials, including Minh's successor Van Huu Chien, were placed under house arrest while an arrest warrant was issued for another ex-police officer who worked under the Ministry of Public Security.

The suspects have alleged connections to real estate developer Phan Van Anh Vu, a former senior intelligence officer who was arrested in January following his deportation from Singapore after using a false identity to enter the city state.

The 42-year-old Vu was initially investigated for revealing state secrets, but now police have also included tax evasion and abuse of power.

Police are investigating nearly three dozen properties related to Vu. The properties had previously belonged to the state and were reportedly sold to Vu at below market price.

Vietnam has stepped up its fight against corruption in recent months with the state energy giant PetroVietnam and the banking sector at the center.

Scores of former or current senior executives of PetroVietnam and bankers have been put on trial. The most senior official to fall in the crackdown was Dinh La Thang.

Thang was sentenced to 31 years in prison for mismanagement in two separate trials for his role as chairman of PetroVietnam. He was the first former Politburo member to be imprisoned in decades.