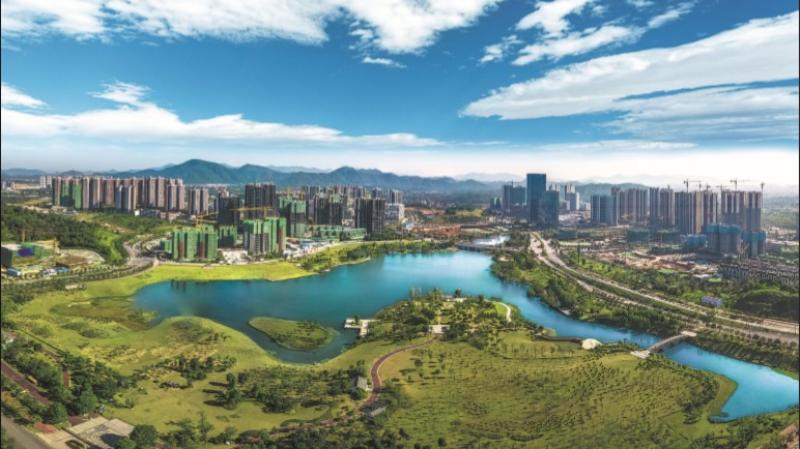 The Sino-Singapore Guangzhou Knowledge City is recently elevated to the status of a State-level project for bilateral cooperation. (PHOTO / CHINA DAILY)

Authorities in Guangdong province, an economic juggernaut in South China, will accelerate a special plan to develop the Guangdong-Hong Kong-Macao Greater Bay Area and provide firm policy support and fresh opportunities for the 11-city cluster, according to a senior provincial government official.

The major task this year is to make all-out efforts to push forward development of the Greater Bay Area, which will help lift the province to a higher level of opening up

"The major task this year is to make all-out efforts to push forward development of the Greater Bay Area, which will help lift the province to a higher level of opening up," said Ma Xingrui, governor of Guangdong.

Ma made the remark while delivering a government work report during the annual provincial legislative meeting, which opened on Monday.

"We will join hands with Hong Kong and Macao to develop the Greater Bay Area into a world-class bay area and forge a top international city cluster, building an important driver for national economic growth," said Ma.

Guangdong's economy grew 6.8 percent year-on-year to 9.73 trillion yuan (US$1.45 trillion) in 2018, giving the province the top GDP in the nation for 30 consecutive years, according to the government work report.

"The development of the Greater Bay Area will help forge a new growth engine for Guangdong's economy," said Ma. The province projects its gross domestic product to surpass 10 trillion yuan, with a growth rate at 6 to 6.5 percent for 2019.

The province will speed up development of a series of infrastructure projects including roads, bridges, ports and airports, which will bring about better connections with Hong Kong and Macao.

Guangdong will work closely with Hong Kong and Macao to launch economic and trade promotion in overseas markets, especially in countries and regions involved in the Belt and Road Initiative.

"The Greater Bay Area is expected to play an important supporting role in the construction of the initiative," said Ma.

"Innovation will help tackle key issues for traditional manufacturing businesses in the area as the nine cities in Guangdong have been relying heavily on traditional industries for economic expansion," said Lin.

The Greater Bay Area includes the Hong Kong and Macao special administrative regions, and nine major cities in Guangdong, with a land area of 56,000 square kilometers and population of 70 million.

By 2030, the area is expected to become an important global hub of innovation, finance, shipping and trade, according to the China Center for International Economic Exchanges.