Australia gets crucial 1-1 draw with Denmark at WC 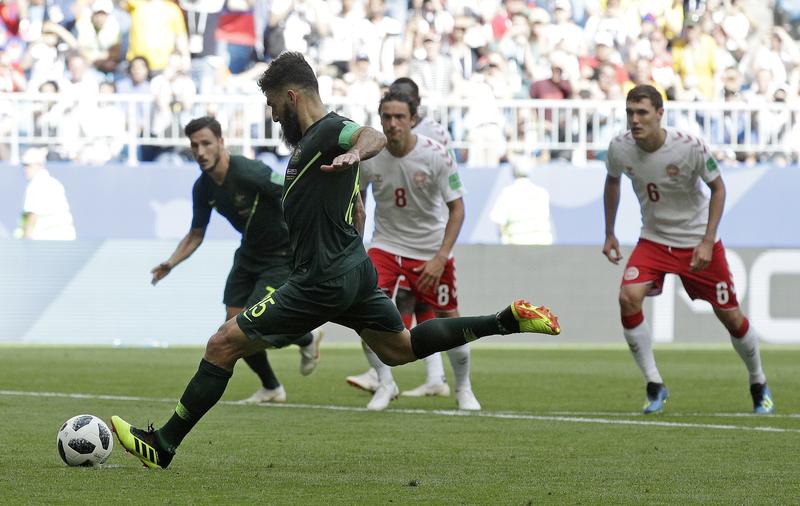 Australia's Mile Jedinak scores his side's opening goal from the penalty spot during the group C match between Denmark and Australia at the 2018 soccer World Cup in the Samara Arena in Samara, Russia, June 21, 2018. (GREGORIO BORGIA / AP)

SAMARA, Russia — Mile Jedinak has a knack for penalty kicks and his strategy is beyond simple.

"Just to get that ball in the back in the net," the Australia captain said after converting from the spot to give Australia a 1-1 draw against Denmark on Thursday and new life at the World Cup.

The 38th-minute penalty was set up after Denmark forward Yussuf Poulsen was called for a handball following a video review. Poulsen was also cautioned by the referee and will be suspended for the team's final group match against France because of yellow card accumulation.

The goal was Jedinak's second from the spot at this year's World Cup, and it snapped Denmark goalkeeper Kasper Schmeichel's five-match streak of shutouts for the Danes.

Christian Eriksen scored in the opening minutes for Denmark, which has gone unbeaten in 17 straight international matches.

READ MORE: Christian Eriksen poised to break out at WC

Denmark's Christian Eriksen celebrates after scoring the opening goal during the group C match between Denmark and Australia at the 2018 soccer World Cup in the Samara Arena in Samara, Russia, June 21, 2018. (MARTIN MEISSNER / AP)

Going into the tournament, No. 36 Australia was the lowest-ranked team in Group C with the others all in the top 12.

With a loss to France in the opener, a defeat Thursday would have made it nearly impossible for the Socceroos to advance to the next stage. Denmark, meanwhile, won its first match against Peru.

Going into the tournament, No. 36 Australia was the lowest-ranked team in Group C with the others all in the top 12

In the later group match on Thursday, France's 1-0 victory eliminated Peru while securing a spot in the knockout round for the French.

Australia lost to 1998 World Cup champion France 2-1 last Saturday in Kazan, with both French goals coming as the result of video technology. But the score didn't reflect the Socceroos' gritty defensive performance.

"You've got to put those frustrations aside," Jedinak said. "You don't put two performances in like that if you're frustrated. You've got to just believe, and that's what we do. We have belief in what we're doing. We're believing in the structure and how we've been training and preparing. And we'll continue to do that. It will be the same going forward."

Australia again took a defensive stand against Denmark, which was back at the World Cup after missing out on the tournament in Brazil. The Danes were coming off a 1-0 victory over Peru on Saturday in Saransk. Poulsen, who plays for German club RB Leipzig, scored the lone goal.

It is the fifth World Cup appearance for the Danes, who reached the quarterfinals in 1998.

Australia was also making a fifth trip to the World Cup. The team's best showing was in the 2006 quarterfinals.

The Danes held the lead until the yellow on Poulsen, which was not without controversy. Video replay also gave Peru a penalty against the Danes in the opener, but it wasn't converted. 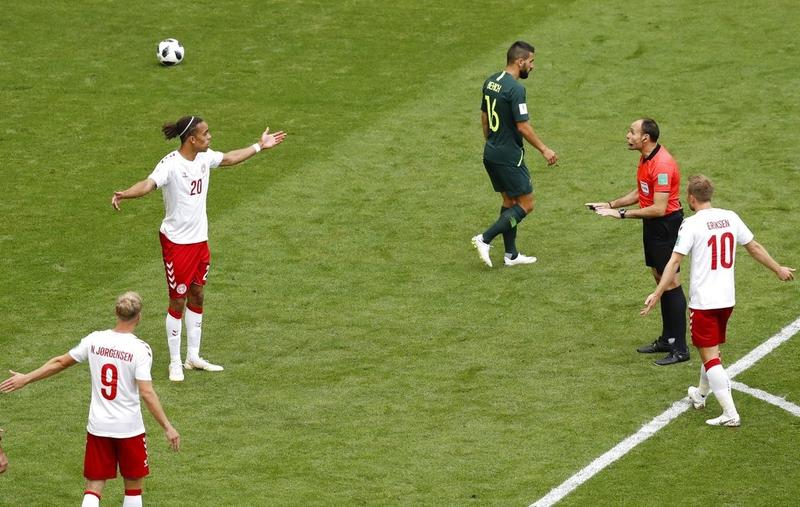 "I think after today I don't like the system. It's the second match it's been used against us," Eriksen said. "If you want to use the VAR for penalties, you should also use it for free kicks. Two matches in a row, that's bitter."

After the pleas from Denmark's players to the referee went unheard, Schmeichel had a few words with Jedinak to rattle him. It didn't work.

"You still have to stay focused in getting good contact and maintain that focus," said Jedinak, who plays for Aston Villa.

Pione Sisto nearly gave the Danes the advantage just after the halftime break, but his shot went to the right of the goal. Australia added some firepower in the 68th, bringing on 19-year-old Daniel Arzani as both teams scrambled for a winning goal.

Denmark's opening victory over Peru was marred by the loss of starting midfielder William Kvist, who fractured two ribs and is likely to miss the rest of the tournament. He was replaced in the starting lineup against Australia by Lasse Schone.

Denmark's last loss was in October 2016 against Montenegro, 1-0 in Copenhagen.

The highlight of Group C will be the match between France and Denmark on Tuesday in Moscow. The top finishers in the group will go on to play opponents from Group D, which includes Croatia, Argentina, Iceland and Nigeria. 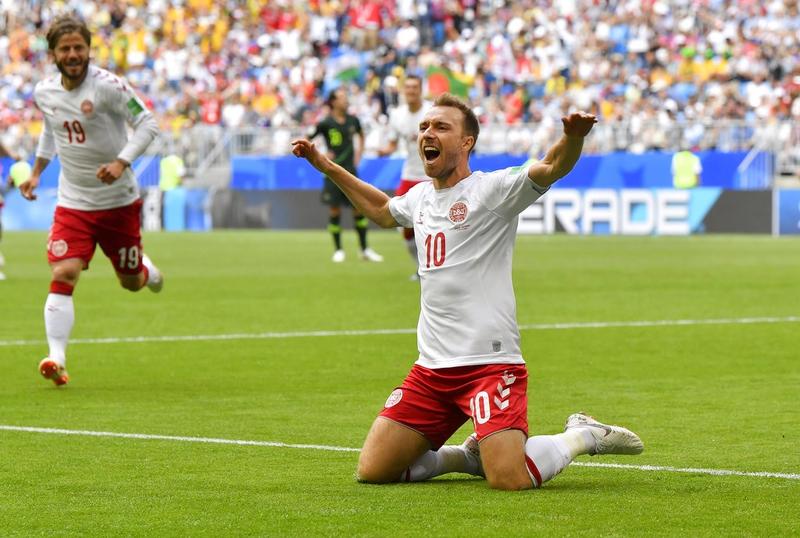 Eriksen, who plays for Tottenham in England, has scored in 17 of the national team's last 20 matches.

During World Cup qualifying, he scored 11 goals for the Danes, third-best in Europe behind Poland striker Robert Lewandowski with 16 and Portugal forward Cristiano Ronaldo with 15.

Eriksen was named man of the match

Now 26, Eriksen was the youngest player at the World Cup in South Africa. He has 79 appearances for the national team and 23 goals.

He was named man of the match on Thursday.

Australia lost Andrew Nabbout in the 74th minute with what appeared to be a dislocated shoulder. He was replaced by Tomi Juric.

"I think the tournament is over for him," Australia coach Bert van Marwijk said.

Nabbout's arm was in a sling after the game, but he said he wasn't in pain.

"Obviously it was disappointing," Nabbout said. "There were a lot of emotions running through at the end of the game."