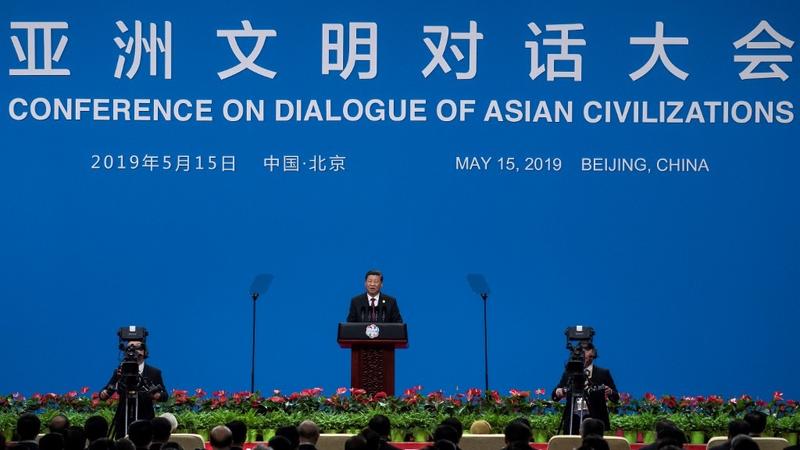 Chinese President Xi Jinping delivers a speech during the opening ceremony of the Conference on Dialogue of Asian Civilizations at the National Convention Center in Beijing on May 15, 2019. (NICOLAS ASFOURI / AFP)

In 1409, before Chinese admiral Zheng He led his large fleet to distant shores, he asked artisans to make a carved-stone stele in Nanjing, Jiangsu province.

We have to stay united when confronted with challenges. This conference provides a good opportunity to understand each other's civilization

The stele traveled with the flotilla and was left in Sri Lanka as a gift to a local Buddhist temple. Praises for deities in three languages－Chinese, Persian and Tamil－were carved on the stele.

Friendship via the ancient maritime Silk Road was strengthened when the stele was found in 1911 in the southwestern Sri Lankan city of Galle. A replica of the artifact is now in China.

President Xi Jinping, foreign leaders and other dignitaries attending the opening ceremony of the Conference on Dialogue of Asian Civilizations visited an exhibition of cultural relics, which displayed artifacts including the stele, at the China National Convention Center in Beijing on Wednesday.

"Sri Lanka has a more than 5,000-year history of civilization," said Sri Lankan President Maithripala Sirisena during the opening ceremony of the conference. "Buddhism is a foundation of our culture, but different religions existed in harmony throughout history."

He said his country was still in shock from the terrorist attacks last month, and he emphasized the importance of dialogue between cultures.

"We have to stay united when confronted with challenges," Sirisena said. "This conference provides a good opportunity to understand each other's civilization."

The exhibits were on loan from The Splendor of Asia: An Exhibition of Asian Civilizations, which opened at the National Museum of China on Monday and showcases 451 artifacts from 49 countries.

From seventh-century BC bird-shaped pottery from Armenia to a Western Han Dynasty (206 BC-AD 24) gold-covered lamp, each item is testimony to the power of cross-border communication and cultural sharing.

One of the exhibits is a late Qing Dynasty (1644-1911) kamcheng, a covered porcelain container, from the Asian Civilisations Museum in Singapore. Kennie Ting, director of the museum, told China Daily that it was a perfect example of how Chinese migrants mixed with indigenous populations to form the unique Baba-Nyonya culture long ago.'

"It was ordered from China, but its colors feature local preferences," Ting said. "Cultural relics from maritime trade are highlights of our collection, and we strive for a cross-cultural style that echoes with the theme of the conference of dialogue."

The exhibit from Cambodia featured a 10th-century statue of Varuna, a Hindu sky god, and showed how culture spread via religious belief in the area of Angkor Wat. Nine other Cambodian artifacts were also exhibited at the National Museum of China.

"These artifacts show the magnificence of our ancient civilization, while at the same time reflect the solidarity of many countries on our continent," said Phoeurn Chuch, secretary of state at the Cambodian Ministry of Culture.

"The good relationship between China and Cambodia in the time of the (ancient) Silk Road has now become more extensive in many more areas, especially in cultural fields, as part of the Belt and Road Initiative," he said.

Asian civilizations are inclusive, as shown by the exhibited marble bust of Alexander the Great, which was unearthed in Athens.

Though it is not an Asian country, Greece also participated in the joint exhibition due to close historical connections and frequent communication between Asia and the Mediterranean nation during the reign of Alexander.

"We present this object because Alexander the Great promoted cultural diversity," said Dimitrios Pantermalis, director of the New Acropolis Museum in Athens. "He built a link between Asia and Europe. In his period, Asian civilizations became familiar to the West for the first time."