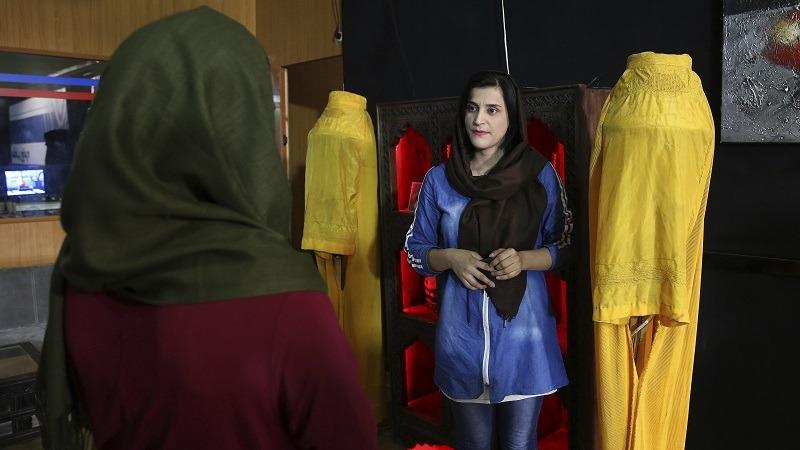 KABUL, Afghanistan - Two yellow burqas are on display at a television station in Kabul, bright versions of the blue ghostlike garments some women in the capital still wear. For the young women at Zan TV they are relics, a reminder of a Taliban-ruled past that few of them can recall.

Their generation is the most vulnerable, and perhaps the most defiant, as the United States and the Taliban near a deal on ending America's longest war. Worried about losing what they've gained over nearly two decades, they are demanding a voice in high-level talks to determine their country's future.

"For me, I will not submit myself to the Taliban," said Shogofa Sadiqi, Zan TV's 25-year-old chief director, who believes the insurgent group will have less impact as it faces a new generation. She described the burqas as a symbol of the challenges women have faced over the years and practically shuddered when asked if she'd worn one herself. Never, ever. "I don't like it," she said, switching to English to make her feelings clear.

For me, I will not submit myself to the Taliban. I don't like it

About two-thirds of Afghanistan's population is 25 or younger, with little or no memory of life before 2001. That's when a US-led invasion pushed out the Taliban, who had sheltered al-Qaida and its leader Osama bin Laden before the 9/11 attacks and imposed a harsh form of Islamic law that kept women out of public view.

Now this young generation watches as US envoy Zalmay Khalilzad negotiates a troop withdrawal in return for Taliban assurances on countering terror groups. With talks focusing on security, little else is assured. Few know what the Taliban are thinking or what they will do as international forces leave and the world's attention moves on.

The insurgent group has recovered from its defeat and now controls roughly half of Afghanistan. With its position stronger than ever it has rejected negotiations with the Afghan government, though intra-Afghan talks on political and security issues are meant to follow a US-Taliban deal. The Taliban could join the government.

As for women's rights in this still highly conservative country, the US has said it will be left for Afghans to decide. 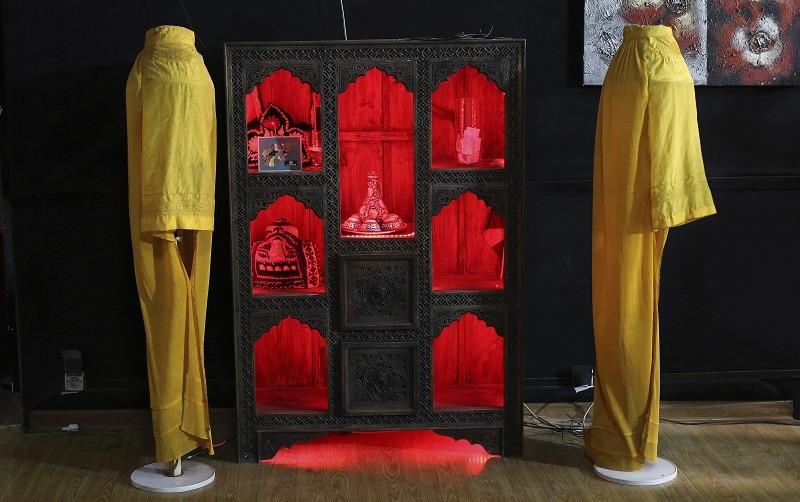 In this Aug 24, 2019 photo, burqas are on display at the Zan TV office in Kabul, Afghanistan. (RAFIQ MAQBOOL / AP PHOTO)

For Karishma Naz, a 23-year-old music presenter on Zan TV - "Woman TV" in the Dari language - the uncertainty is unsettling. She doubts the Taliban have changed their beliefs and imagines two options if the "dark days" return: she will stay at home by force or leave the country, an option unavailable for many young Afghan women.

"Why are there no women to represent and defend us?" Naz asked, worried about losing the career in front of the camera that she'd wished for as a child. But as the seconds counted down to her live broadcast she adjusted her pink headscarf, straightened up and put on a smile.

Her generation has seen Afghan women become street artists, CEOs, a member of the Supreme Court and the first female winner of the televised talent show "Afghan Star." Young Afghan women have formed an all-female orchestra and competed in the Olympics. A woman opened the country's first yoga studio, another leads the state-run film production company and a third held a Kabul street concert with her rock band earlier this year.

They have equal rights under the post-2001 constitution, but reality often lags behind. Women still have to stand up to conservative relatives, community members and judgmental strangers. A bill criminalizing violence against women still hasn't been passed.

Little has changed in areas controlled by the Taliban, who have said girls can be educated and even work in politics and the judiciary, though not as president or chief justice. 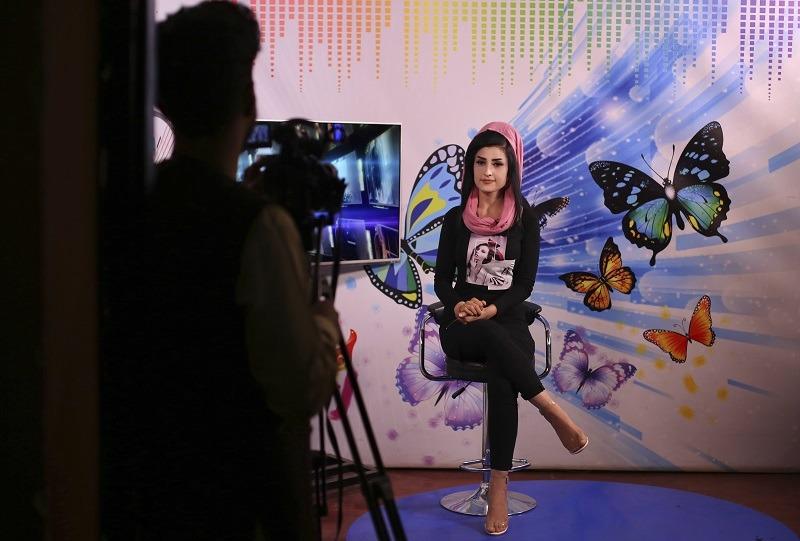 "This research could not identify a single girls' secondary school open in an area of heavy Taliban influence or control," said a report last year by the Overseas Development Institute, which interviewed more than 160 Taliban fighters, officials and civilians in seven of the country's 34 provinces.

Maryam Sama, a 27-year-old member of Parliament, said much still needs to be done even in areas under government control. About half of all girls in Afghanistan still don't attend school, more than half are married before age 19 and domestic violence is widespread despite billions of dollars in humanitarian aid since 2001.

"But if we turn into an Islamic emirate we will have no voice," Sama said, referring to the Taliban's name for its self-styled government. "If anything happens in Afghanistan, if anything goes wrong, all the responsibility goes back to the United States and the people at this (negotiating) table."

One of the few women who spoke with Taliban leaders during their meetings with representatives of Afghan society this year in Moscow and Qatar is former lawmaker Fawzia Koofi, who pushed past her uncomfortable memories of the Taliban's rule to attend in the interest of peace.

Taliban representatives told her they regretted many things that had occurred and said women were forced to stay at home because of the insecurity at the time. She didn't believe it. 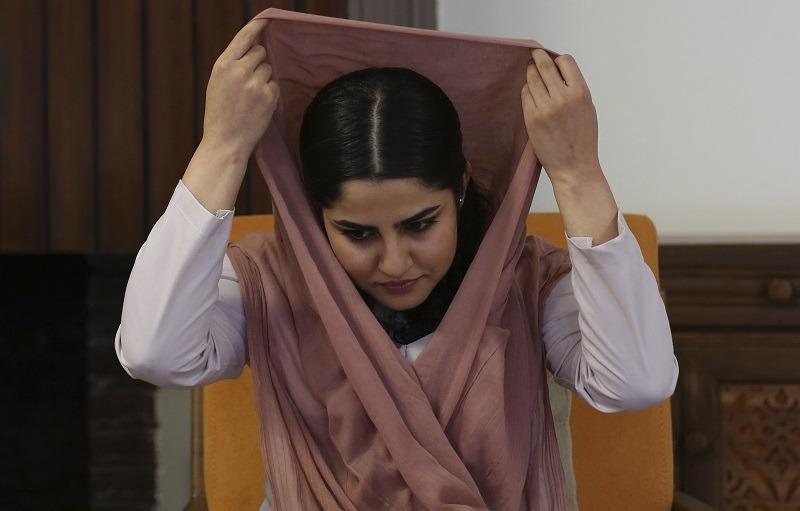 In this Aug 22, 2019 photo, Maryam Sama, a 27-year-old member of Parliament, adjusts her headscarf during an interview with The Associated Press, in Kabul, Afghanistan. (RAFIQ MAQBOOL / AP PHOTO)

The Taliban still don't support women's rights according to international principles, she said. A Taliban statement at the Moscow talks said the group is committed to women's rights within the framework of Islam "and then Afghan tradition." It also criticized immorality and indecency "under the name of women's rights."

"I think the new generation of people in Afghanistan will not be able to accept this kind of approach," Koofi said.

She told the Taliban that a girl born in the final months of their rule would now be 18. "She knows how to use all the technology and the opportunities of the world, and if you try to oppress her or deprive her of her rights, definitely she will use her abilities to inform the world," she recalled during an interview.

Then she excused herself for a meeting, one that was a reminder of how fragile Afghan women's gains can be.

A young former TV presenter was shot dead on her way to work in Kabul earlier this year. Her parents accused her husband, and they told Koofi they've faced attacks from people angry that he, the man, was blamed. Could she help?