By Pamela Lin and Dai Kaiyi 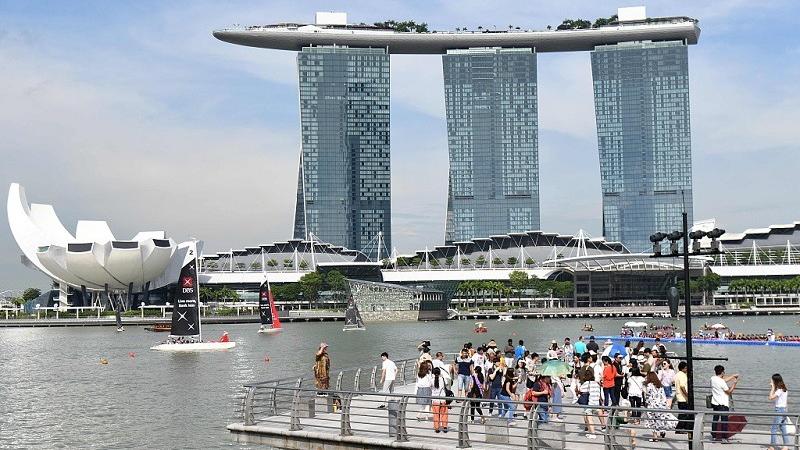 This photograph taken on May 27, 2018 shows people viewing the Marina Bay Sands hotel and resort from the Merlion Park in Singapore. (PHOTO / VCG)

HONG KONG - A growing number of startups from the Chinese mainland are expanding their footprints globally, particularly in Southeast Asia, leveraging the region’s robust demand and a growing online consumer pool, according to fund experts.

In their view, as Chinese innovators strive to leapfrog in catching up and creating success in artificial intelligence, automation, robotics and big data, they’re trying to replicate their tried-and-true experience acquired domestically in the developing markets.

ALSO READ: Experts: Beijing wants HK to get back on track

According to the Association of Southeast Asian Nations, the total value of transactions conducted online in the 10-member grouping reached US$50 billion in 2017, and is expected to hit US$200 billion by 2025.

Liu Yuan - managing director of ZhenFund - told a panel discussion at the RISE Conference 2019 in Hong Kong on Thursday the Beijing-based seedfund is scouring Southeast Asian countries for investment opportunities.

According to the Association of Southeast Asian Nations, the total value of transactions conducted online in the 10-member grouping reached US$50 billion in 2017

In some developing countries that are like China a decade ago, there’s huge market potential for innovative businesses, he said.

Some experienced and mature consumer-oriented internet companies are trying to export their business innovations to other parts of the world for profit, Liu said.

Geoffrey Prentice - co-founder of Hong Kong-based startup Oriente, which offers digital consumer finance in Asian countries, especially in Southeast Asia - found that Chinese companies are immensely interested in Southeast Asian markets, while their US counterparts have been slow to react.

Oriente has 250 engineers in Shanghai exporting the technology service to Southeast Asia as it’s already being tested in the Chinese market, and Chinese innovations have built a mature digital infrastructure layer, he said.

Prentice, who’s also a co-founder of Skype - a popular chatting application - noted that world e-commerce giants like eBay and Amazon have failed to make the grade in China because they have been unable to grasp the specific needs of Chinese consumers.

He stressed that it’s paramount to find local partners and understand what local consumers want when doing business in Southeast Asia.

Other entrepreneurs and venture capitalists shared their insights into what they would like to pass on to their peers in the industry.

Edith Yeung - managing partner of Proof of Capital, a blockchain-focused venture capital fund - believed that products that could show what they’re worth of reflect how innovative they are.

“I think that speaks for itself, and that innovation itself will be enough to get you ahead of someone else,” she said.

JP Gan - managing partner of Qiming Venture Partners - said “betting on the right track” is the single most important thing for enterprises to scale up the ladder.

“Usually, it's easier for you to raise money and hire people who could probably help you with 40 percent of your success,” he said.

On the concerns arising from the ongoing Sino-US trade stand-off, Anna Xu - founding partner of Hike Capital - said it would be a protracted topic in the decade to come.

READ MORE: Bay Area a 'shot in the arm' for Shenzhen's office sector

But, the resonance of the world’s two largest economies on the innovation front has reached a level that both sides simply cannot be torn apart completely.

This year’s RISE conference - one of the biggest technology events held in the Asia Pacific and organized by Web Summit - marked the fifth year Hong Kong has hosted the gathering.

More than 600 startups worldwide were represented by some 16,000 founders and chief executives, as well as global investors.

The participants shared their views on a wide range of technology subjects, including 5G, artificial intelligence and the Internet of Things.